DAD LOVED HIS DOGS---ALL 4 OF THEM 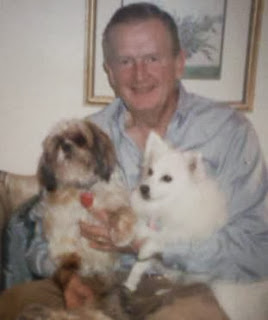 My Dad was like most Americans in that he was a big dog lover. He wasn't obsessed and
didn't oufit them in funny costumes and take pictures to put on a Christmas card, but my
Dad treated them like most of us do: like a great friend and family member.

The only difference between my Dad's love for dogs and that of most people's was that he
had four of them to take care of at one time. He didn't plan it that way, but because he could
never  say "no", that's how things turned out.

After my sister, Kara, returned from a summer in Colorado after graduating from college,
she brought home a snow white American Eskimo she had rescued in the Rocky Mountains.
Kara moved into New York City and her apartment complex didn't allow dogs. Knowing
that my Dad never said "no" to her in her life, Kara asked Dad if she could take care of her
dog, Kirby.  "Sure, why not," he said. "What's another dog?' My Dad, who had big German  Shepperd's when we were growing up, downsized later in life, going with a lhasa apso
and a shih tzu. With the addition of Kirby, Dad had three dogs. For a while. 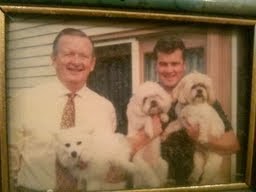 A few years later, Kara got married and had a kid with her husband, who also brought
a dog into the relationship. After moving from the city out to the Connecticut suburbs, they
were concerned about having a good sized dog around a new born baby.

"Dad, do you think you could take the dog? Please?", she asked. And, of course, my Dad
said yes. So, here was my Dad, just about in retirement with four Dogs to take care. Mom
helped out, of course, but Dad felt it was his job to feed 'em, walk 'em, and do whatever else
needed to be done for them. Caring for one dog is hard enough, not to mention expensive,
try doing it times four. But he loved it. Boy, how did he ever love it.

The sight of seeing my Dad walking four dogs was pretty comical. In the stuffy, pretentious
town of New Canaan, I'm sure there were some people who saw him walking in the street
twisting and turning with four dogs and figured he probably became a professional walker
to pick up a few extra bucks. 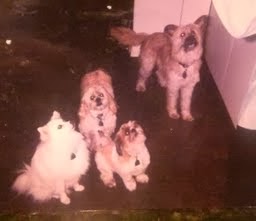 That's funny and so were Sunday mornings. My Dad would go to 7 a.m. Mass and would
always take his four buddies with him. He'd stand at the door leading into the garage and
yell, "Let's go! Time to go to church." And it became like a Sunday morning jail break.
Four dogs from different parts of the house would bolt for the garage door. They'd go
slip-sliding into walls and wipe out in an effort to get to the car first. Dad would open
the hatch to his SUV and the dogs that could, would leap into the back. The two that
couldn't, got a lift from my Dad. It was a small thing, but my Dad got one helluva kick
out of it.

Once he got to church, he'd roll down the windows and leave the dogs with some water
before going in to praise the Lord. When he returned home, he'd always stop at the beginning
of the long driveway leading to the house. The dogs would start barking wildly until Dad
let Kirby out. Kirby, the white American Eskimo, would do 360's in front of my Dad's
SUV until he started to move forward. Then she would go in a full-sprint to the house
as if she was leading my Dad home.

I found a picture of my Dad with his dogs this morning and it brought back a lot of memories.
He treated those Dogs the same way he treated the rest of the family: like gold. Man, did
he love those dogs.
Posted by Paul Devlin at 8:21 PM