Boyd Harden is an ex-Marine who was trained to fly high-powered helicopters. At
UNC, he was an All-American defenseman in lacrosse and while at New Canaan High
School, Harden earned All-State honors in hockey. I'm not sure if he even knew those
sports used a hard-rubber object to pass and score with because Harden was a heat-seeking
missile who would much rather destroy an opponent than celebrate a goal. 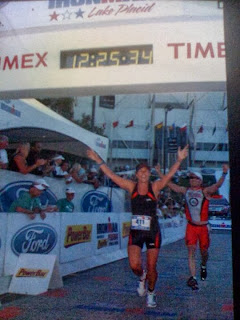 But in his household, Boyd takes a backseat in the sheer mental toughness department, to
his wife, Keri Chaisson, a graduate of New Canaan High School. Chaisson-Harden, 42, and
a mother of three, is an avid endurance triathlete. This past July, she completed the Lake
Placid Ironman for the third time in her brief career. For those scoring at home, the Ironman
consists of a 2.4 mile swim, a 112-mile bike, followed by a 26.2 mile run. Yep, just a 140.6
mile journey that she usually completes in less than 13 hours.

I've attempted to interview her several times over the last few years, but she respectfully
declines. She is not interested in any attention, which in this "look at me, aren't I great, post everything to Facebook world", is certainly refreshing.

I've known Keri, Boyd, and their families for quite some time and was really interested in
seeing what the Ironman experience for them was all about. I've done several half-Ironman
and have an idea about the preparation, pain, and punishment a triathlete endures over a long
period of time. But the Ironman is a beast on steroids and dwarfs the 70.3 mile event not just
in the distance of it, but the mind-numbing pain one has to endure, as well. 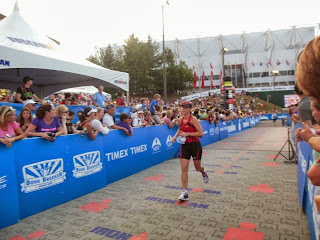 I traveled to Lake Placid in the final weekend of July to experience the event as a spectator
and watch Chaisson-Harden prepare and compete in the small, picturesque village that
somehow managed to host a gargantuan international event like the Olympics not once,
but twice.

On race day, Chaisson-Harden woke at 4 a.m. to fuel her body for the grueling day ahead
of her. Imagine knowing that you're going to be exercising for nearly 13 hours straight,
burning calories at a lightning quick rate and realizing you can't just go to the fridge or
stop off at a convenient store to load up on things to replenish your body? Taking care of
your body during the race is an event in itself. 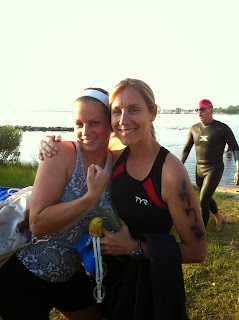 Phase I of the Ironman is a 2.4 mile swim in beautiful Mirror Lake, which sits less than
a half-mile away from the Olympic hockey arena where the United States completed the
"Miracle on Ice" in the 1980. Open water swimming is not like swimming in the pool
at your health club. With the mass of humanity, it's like swimming in a blender with elbows,
feet, hands, heads, furiously trying to find open space to swim. Chaisson-Harden, who is
a strong and gifted swimmer, finished the course in just over one hour.

Next up, the 112-mile bike ride. Lake Placid is not Florida or Chicago, where the landscapes
are completely flat and easy to ride. This is the Adirondacks, meaning there are challenging,
steep inclines and rolling hills. Over the course of the ride, your lungs burn, your legs bark,
and your mind goes off into a million different places, with you questioning why the hell
you decided to do this event in the firs place.

This is the third time Chaisson-Harden has competed in the event, her fourth Ironman overall.
I can only imagine what goes through her mind when she does it again and again and again.
After I completed my half-Ironmans, I said there was no way in hell I'd ever even consider
doing a full Ironman. The pain is ridiculous in a 70.3 mile event, forget about doubling up
on it. 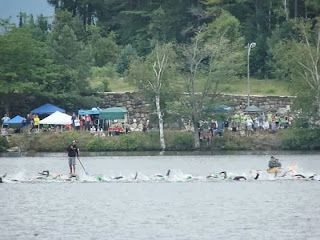 But for Chaisson-Harden, pain must certainly be her good friend by now. She seems to be
addicted to it. One has to be to put in all the hours of preparation for the event. It's not like
going to the health club to take a couple of spinning classes and a few swims in the pool.
There are days when you have to ride the bike for eight hours and go on long runs that last
as long as a Red Sox-Yankees baseball game. The training for an Ironman is mind-blowing
and body destroying.

Chaisson-Harden finished her bike ride in just over six and half hours, or about 90 minutes
longer than a tennis match between Novak Djokavic and Rafeal Nadal. At the end of the ride,
your legs are cramping, your mind is screaming at you, and you still have a 26.2 mile run
ahead of you. I'd like to see the Kenyan marathon runners do a 112-mile bike ride before
they crush everyone competing in New York and Boston. Now, that would be interesting.

I watched hundreds of runners pass me by twice on the two loop course. I saw the pain,
the blank looks, and focus on the faces of those driven to completing this challenging event.
I don't think it's about winning for most of them because five seconds into the race, they
have no shot at staying with the professionals who are an entirely different breed,
almost superhuman. This is about testing your will and inner drive. This is about not quitting
or giving in to the challenge.

Chaisson-Harden injured her back during the grueling final leg of the event. But she didn't
stop, complain, or pack it in because of it. It would've been easy to say, "I can't do it anymore"
and everybody would've understood. But that's not in her DNA. She battled through the
injury and just kept going, trying to find a way to finish off a 26.2 mile run. Good, Lord,
that sounds so painful as I type away on the computer.

I positioned myself near the finish of the event, located at the Olympic Oval, the same place
where Eric Heiden made history by winning five gold medals in speedskating. I didn't want
to intrude on Keri's moment with her family as she crossed the finish line, ending nearly
13 hours of pain and punishment. I stationed myself near the entrance to the Oval and a spot
just about 500 yards from the finish. On a drizzling and overcast day, near perfect conditions
for the athletes, Chaisson-Harden entered the Oval determined to finish strong in the event.
I yelled out to her and she took the time to give me a fist pump, although the look on her
face said, "Please, just let me finish the event."

Chaisson-Harden did just that, completing her hat trick of Ironmans in Lake Placid less than
1,000 yards from where Team USA complete its run to the Olympic gold medal in hockey.
There were no miracles in Lake Placid to Chaisson-Harden, after all, this was the third time
she had completed this event. It had become old hat to her. But to me, seeing her complete
the event with a bad back and never, never giving up, was pretty impressive.

Chaisson-Harden spent the next five hours in the medical tent hooked up to an IV. Five
hours! As long as that epic tennis match between Djokovic and Nadal.....Amazing.

Keri Chaisson-Harden is an Ironman four times over and that is a tremendous accomplishment.
Posted by Paul Devlin at 4:22 AM