Every day, thousands of tiny events happen and if you're not watching, if you're
not careful, if you don't capture them and make them COUNT, you could miss it.
-Toni Jordan Novelist-

Sometimes life's greatest lessons are right in front of us, yet we fail to see them. We are
often consumed by what we don't have instead of focusing on the great things we do. We
keep looking back into the past so much, we become blind to all the great things that lie
ahead of us.

On Sunday, I got a great lesson, not to mention a great source of inspiration, because I
was watching what was in front of me, rather than being consumed by the things that were
behind me.

I was in a road race on Sunday, and over the course of 18.6 miles a lot of things went
through my mind and most of them were tagged with a question mark. Why they heck did
I get up at 5:30 a.m. for all this pain and punishment? I hate to run, so why am I running
so much? What's the point? What does it matter? Aren't I getting a little too old for this?

All those questions when zooming through my head as I pounded the pavement on a perfect
first day of fall with more than 200 other runners. I had been in the zone with my iPod
blasting the best of Captain & Taneal and the Carpenters to try to muffle the pain
that came with each and every stride. I couldn't hear the sound of footsteps coming up
me from behind, so I was startled when a frailish-looking, gray-haired man passed me by
on mile 15 of the run. 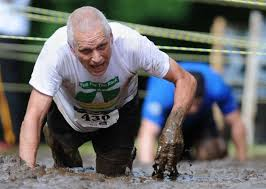 I had seen this man running long before the race had even started, his oversized pale-yellow
T-shirt was not enough to cover his elbows that seemed to be thrashing in the wind. I hate to
run and damn if I'm going to run an inch more than I have to, especially, on a day
when I'm running close to 20 miles. This guy ran as if every step was a painful one, his
running form anything but perfect. He had a distinct look that one could not easily forget.

I never could catch the man. He was right in front of me for nearly all of the last three miles
of the race. I wondered what his story was, from what he did to how often he ran. He seemed
to be laboring through every inch of the run, but didn't appear to be breaking a sweat. The
man in the yellow shirt finished 25 seconds in front of me, and just like that, he disappeared.
I wanted to congratulate him and hear his story, but like the phantom, the man vanished.

I didn't stick around very long, either. I stuffed as many apples, oranges, and bottled waters
into my pockets and I was off. I got my time and didn't need to see any other results. But I
was extremely curious about the guy in the pale yellow shirt.

Late Monday night, the results of the race were posted on-line and I quickly searched for
the guy in the yellow shirt who finished just in front of me. BRUCE GOULART, 63,
NEWTOWN, CT. A 63-year old man had dusted me. Blew by me at mile 15. But an average
runner just doesn't do that, especially one in his 60's. I had to know more about him. 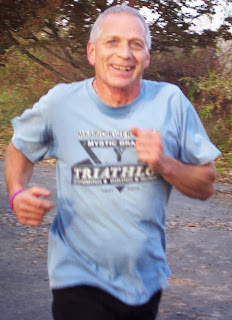 I did a search of Athlinks.com, which is a website that banks official results. I found
Goulart's chart and I almost fell out of my chair after seeing what I saw. There is an icon
on the chart that announces to the world how many races a person has done. It said, "See
all 600 races." Here is the link. It's mind-boggling.  http://athlinks.com/racer/results/14673720

600 races?!! Are you kidding me. Goulart is addicted to endurance events. He has done
33 marathons, 41 half-marathon, and five Ironman events. During a stretch from 2008 to
2011, he averaged 57 events a year, which is insane!

Goulart, even at age 63, is doing something really tough, yet really loves. He is passionate,
determined, and is proving that the road ahead is still pretty awesome. The journey truly is
just as important as the destination. Like Diana Nyad said, you're never too old to do
anything that you want.

No matter how old you are, there is still a lot left to accomplish in  life. You might not
look pretty doing it, but doing it is all that really matters.