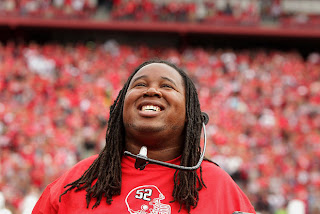 The best moment in college football didn't take place in College Station, Texas or Ann Arbor,
Michigan. It didn't happen in Tallahassee, Florida or Eugene, Oregon. There wasn't a play by
Johnny Manziel or Devin Garnder that produced a goose-bump, make-you-think moment like
the one that occurred in Piscataway, New Jersey on Saturday.

Yeah, I said Piscataway. Home of Rutgers, the school still rinsing itself off of the Mike Rice
scandal and the not-so-smart decisions that were made after it. Send in the clowns has been
the school's theme song since last spring. 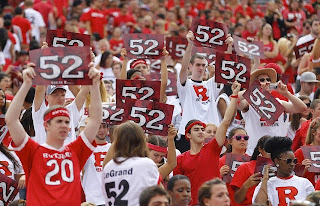 But the state university of New Jersey made all the right moves on Saturday when they retired
number 52, the first one ever put away for good in the 144-year history of the program. In an
emotional ceremony, Eric LeGrand, saw his number unveiled at the stadium. LeGrand was
paralyzed from the neck down three years ago. There have been much better players than
LeGrand, a few of them like Ray Rice, are deserving of Rutgers immortality. But nobody
in the history of the program has ever had a better attitude than LeGrand. Ever. 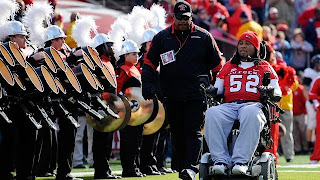 His life was changed forever when he tried to make a tackle on a kick-off three years ago
against Army. One moment, he's a Division I college football player with a big future ahead
of him. The next moment, he's a paraplegic with virtually no chance of ever walking again.
Medical personnel would put that number at zero.

LeGrand doesn't care what anybody says. He, and probably he alone, believes he will
get out of his wheelchair and walk again. I've seldom seen a picture of LeGrand without
that mega-watt grin on his face. He is always happy. It's not an act for the cameras or the
fans around him. LeGrand is truly a happy man. One who laughs in the face of adversity,
while giving others like him real hope.

LeGrand is living his life the way he wants to live it now. He's a motivational speaker,
a football analyst on the radio, and the voice of the 1.5 million people in the United States
who are paralyzed in some way. 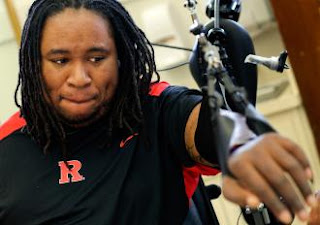 Eric LeGrand was the best player on the field on Saturday. It was his day, his moment, and
one that he deserved to have.
Posted by Paul Devlin at 5:34 PM