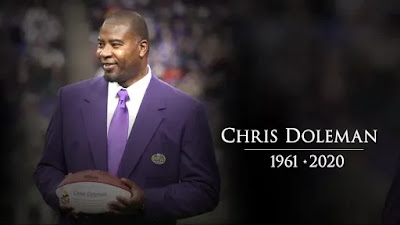 Early Wednesday morning, I was scrolling through the tsunami of stories on social media
as I sipped on a piping hot cup of coffee.  Most of them were either tributes to the late Kobe
Bryant or the investigation into the helicopter crash that took the life of the NBA legend
as well as eight other people, including Bryant's 13-year-old daughter, Gianna.

Seemingly buried through the heartbreaking stories was a headline that caught my eye and
knocked a little wind out of my stomach.

Hall of Famer Doleman dead at the age of 58

I clicked on the link and winced. Chris Doleman, a defensive force and football legend, had
died after a two-year battle with brain cancer. Doleman wasn't a global icon like Kobe but he
accomplished things most NFL players can only dream of.

The York, Pennsylvania native was an eight-time Pro Bowl defensive end in his 15-year career
with Minnesota, San Francisco, and Atlanta. He recorded 150.5 career sacks, which ranks as fifth-best all-time and in 1989, Doleman registered an incredible 21 sacks for the Vikings.

I soaked up pretty much everything Doleman did as a player, but knew very little about him as
a person. Unlike Kobe, who played under the bright lights of Los Angeles, Doleman spent 10
years of his career playing in Minnesota, where few athletes become household names, even
those who were as dominant a player as Doleman was. 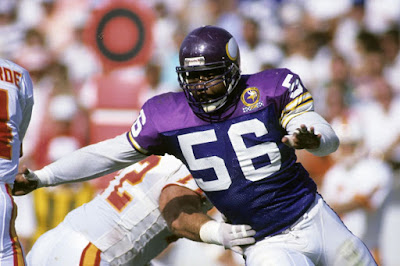 The dearth of personal information I had on Doleman changed in 2003. We were part of
a team that broadcasted games in the south for an upstart football network. With both of us
based in Atlanta, we hit the road together for games in towns that were off the beaten path like
Boone, North Carolina, Florence, South Carolina, and Martin, Tennessee - not exactly places
that would make anybody's bucket list to visit.

At 6'5" and nearly 300 pounds, Doleman was a mountain of man with a perma-look on
his face that said, "Don't mess with me with any kind of your bullshit." That probably came
from trying to survive in a viscous sport that saw him miss only two games because of injury
in his 15-year career.  I took him for a bad ass - and he was. But behind his NFL persona
was a person who was so incredibly humble, kind, and one that was just soaking in great
character.

Doleman wasn't a "hey, look at me"-guy when he played. There were no sack dances, no chest
thumps, or never-ending searches for the camera. Chris Doleman was old-school. He just
destroyed guys and went back to the huddle to get ready for the next play. And that's exactly
how he was when we worked together nearly every weekend for three months. As much as
I inquired about his career, his opponents, and his style, Doleman never wanted to talk about
himself - unless it had to do with his golf game. 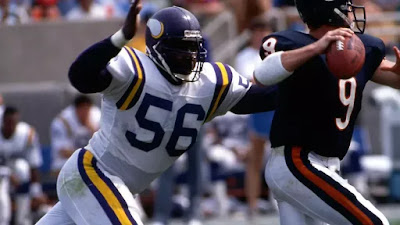 Doleman loved golf. Every time we were scheduled to work a football game together,
Doleman always said to me, "make sure you bring your clubs." We would leave early Friday
morning and be on a course by noon. Doleman was hooked on golf and the big man
could hit it a country mile. Think Happy Gilmore without the run up to the ball.  He would
rain all over my drives with his 330 -yard pokes without much effort. And Doleman had a
decent short game for a man of his great size.

Doleman's passion to analyze college football games few people cared about didn't match
his obsession with golf. He was a thoughtful, well-spoken man, who knew the game of
football inside and out, but talking about the sport on television was something  that was more
of a hobby to Doleman. I can guarantee you he didn't spend a lot time thinking about
working games for a major network. To Doleman, if it happened, it happened. No biggie.

What was important to Doleman was making the Pro Football Hall of Fame. His incredible
numbers were more than enough to achieve immortality in Canton. But for all his great
success on the field, Doleman didn't achieve anywhere close to Kobe-like superstar status
when he played. Perhaps that was because nobody actually heard Doleman talk or say
anything. I reckon  that unless you lived in Minnesota, you probably didn't even know
what Doleman looked like.

He often lamented to me that maybe he should have been more outgoing, but at the same
time, he despised all those players who were self-promoters to the media and beyond.

That just wasn't Doleman. He was just too proud and too humble to do any of that me, me,
me stuff.

Doleman fell short of making the Hall of Fame in his first year of eligibility and he wasn't
happy about it.. "Paul," he said. "I don't want to make it when I'm old and gray. I want to
still be young enough to enjoy it." 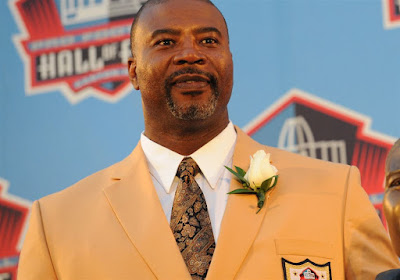 In 2012, Doleman made the Hall of Fame at the age of 50 - plenty of time to enjoy football
immortality. Or so I thought.  Doleman was diagnosed with brain cancer in 2018 at the age
of 56, the number he wore when he played.

It's sadly ironic that Doleman died during a week when the world is mourning Kobe Bryant.
He was almost always overshadowed and not really recognized for the unbelievable player
he was during his football career. Today, the article about his death sat beneath an
avalanche of tributes to Kobe Bryant.

That is just kind of sad all the way around. Damn, life just ain't fair.

I'm going to miss you big fella. Rest in Peace.