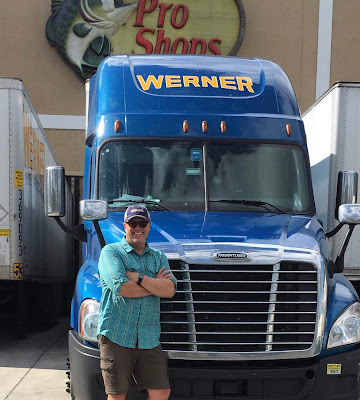 As a television producer, Flip Fors went into every show knowing he'd probably have to
change things up on the fly. Breaking news, reporters missing slots, and satellite feeds
dropping just before hit times are just a few things that can throw off the most meticulously
planned shows, leaving him to carry the load and make a seamless transition to normalcy
while trying to put out fires in the control booth.

Now, after nearly 20 years in broadcast news,  Flip has changed things up on the fly in a big way.
He left the organized chaos world of television and is settling into his new profession - a truck driver.

"I had always been intrigued by truck driving. When I worked in my last job. I would see truck drivers out on the road and say to myself, 'Wow, I'm driving seven or eight hours for a one or
two-hour meeting,' Flip said while en route to delivering a load to Fort Myers, Florida where he
once worked as a producer for WBBH-TV.  "Then I'd have to drive back another seven, eight hours not really getting anything done. "But these truckers are in their office right now," he said. "And what
I love about it is how we are directly impacting the economy by delivering all of the amazing
products that people buy every single day." 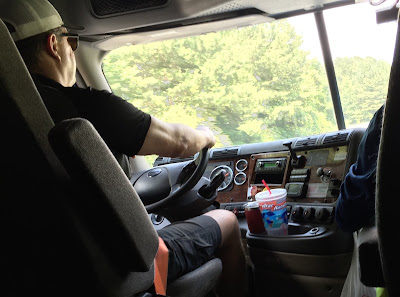 It's not everyday someone in television winds up as a professional truck driver. Flip might actually
be the first in broadcast history to go from senior producer to a rookie driver of a big rig.
There was shock and awe when Flip told many of his friends of his highly-unusual ambition, but
getting Kristin, his wife of 15 years, on board with it was somewhat of a challenge.

"Well, it was a huge shock to my wife when I initially told her that I was considering it, " Flip said.
"I explained that I had researched it and had actually been thinking about it for a while, so it just
wasn't "on a lark." I laid out my case and she was impressed and basically said I should go for it,"
he said.

The Atlanta, Georgia resident who has a 14-yearold daughter named Grace, went for it
shortly after being laid off from The Dairy Alliance, a milk company where he worked as a  communications director. Out of television and out of work, Flip saw a world of opportunities in
front of him and threw caution to the wind, setting out to do what he wanted to do. 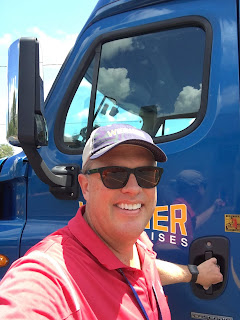 "I realized I had the chance to reinvent myself," Flip said. "I didn't have to be 'Flip' the TV guy
or Eric the dairy communications guy. For the next chapter of this wonderful life, who did I
want to be?" he said. "I did research on high in-demand careers, their training, and their long-term
financial opportunities. I attacked it and put my plans into motion to get my CDL and work
with a trucking company." Flip said.

Flip isn't afraid of the grind that goes with being a trucker - after all, he gained mental toughness
as a  swimmer at the University of Georgia and knew how to endure the pain that
accompanies 10,000 yard workouts at 5:30 in the morning. He went all in and signed up for
trucking school where he passed his exam on the first try.

"Training was pretty darn tough, but it was a lot of fun," he said. "You're getting to drive and
maneuver a massive 20-ton vehicle - it can be up to 40 tons if the trailer is full. "That's a lot
of pressure and responsibility. During school, you're basically re-wiring your brain to understand
that the trailer will go in the exact opposite direction that the wheel is turned because it's
articulating on the pivoting fifth wheel on of the back of the tractor, " Flip explained. 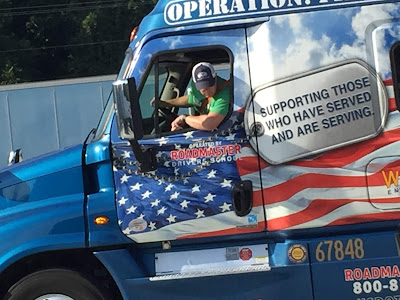 Flip, who made stops in Macon, Ga., Fort Myers Fla., Louisville, Ky., and Atlanta, Ga., during
his career in television, will now be criss-crossing the country carrying loads to some cities he's
never even heard of.  But Flip doesn't mind and certainly doesn't care what you think of his new profession.

"I will say this right now - despite any preconceptions that you might have, truck driving is a real
skill set and the behind-the-wheels people are valued professionals," Flip added.

Flip is still in the training program and hopes to get his own rig by next year. He's already
picked out the color of it and knows exactly how he's going to brand it.

"I'm hoping to to have a nice dark blue one like my training partner has. They're good-looking
rigs. " Flip said. "I'm going to paint a dolphin like Flipper jumping through a flaming hoop or
possibly a giant Georgia Bulldog on the side."