BARTOLO COLON: THE 8TH WONDER OF THE WORLD 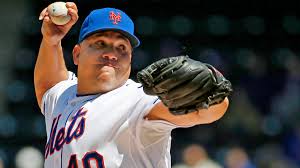 I'm not sure how much of the World Series I'll watch, but when Bartolo Colon of the New
York Mets comes into the game, I will be glued to the television. As a former catcher, I just
love watching this guy pitch. The 42-year-old veteran is quite fascinating, really. He's
half-man, half-cartoon character and a player who draws comparisons to former wrestling
great, Andre the Giant. 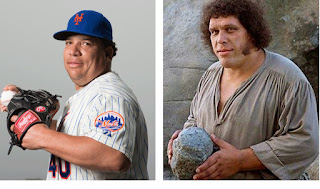 Listed at 285 pounds in a media guide that must have received that number about 10 years
ago, Colon appears to be about a biscuit away from 305. Off-season fitness program? I
highly doubt it. In-season workout schedule? Perhaps, if it means making a run for Dunkin'
Donuts in between a day-night doubleheader. Colon is old-school like Babe Ruth. If it's
not moving he'll probably eat it, but once he gets between the lines, he's all business.

The New York Mets made a smart business decision when they signed Colon to a 2-year,
$20 million contract. They knew, even at the age of 41, Colon could eat up innings just
as he devours everything on his plate. Over the last two seasons, he's won 29 games, which
is something a lot of pitchers would love to have on the back of their baseball cards. 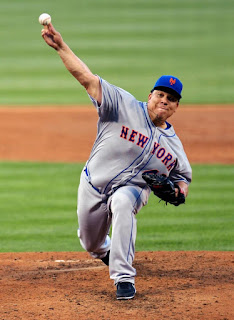 Colon entered the league with the Cleveland Indians in 1997 and seems to have been playing
forever. He has 218 career wins which is two more than Curt Schilling and also has something
the former Red Sox pitcher doesn't have: a Cy Young award. Colon won the award in 2005
when he went 21-8 for the Los Angeles Angels of Anaheim.

Colon has been a rock for the Mets. Besides his 29 wins, Colon has gobbled up a hefty
plate of 396 innings. Yep, all at the age of 41 and 42. His record hasn't been all that
squeaky clean, in fact, Colon has been a little bit dirty. He was suspended by MLB
50-games in 2013 for testing positive for PED's. The Mets gambled on him and Colon
has paid dividends as big as his near 42-inch waste. 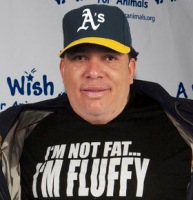 When Colon gets on the mound, he never seems to waste much. This season, 85 percent
of his pitches were fastballs, mostly of the two-seam variety. He paints the black with his
88 mph heater and often freezes hitters when the ball moves incredibly back across the
plate like Greg Maddox.

Colon is another reason to like the Mets. He's humble, humorous, and hard-working.
Eh, well, two out of three isn't bad. Bad body and all, America loves Bartolo Colon and
he could become a household name when this series is over, or at least have deli sandwiches
in New York City named after him.