WALLY BELL, MAY YOU REST IN PEACE.

It's easy to remember a name like Wally Bell and if you got to know the same one I did,
you'd realize he'd be pretty hard to forget.

Wally Bell passed away on Monday, the victim of an apparent heart attack. He was just
48 years old. Bell lived a good life, spending more than 20 years as a Major League
umpire. getting the opportunity to call a World Series.  When I read about his passing,
I was stunned and saddened because I became  acquainted with Bell during our days in
the Carolina League, he as an umpire with visions of making it to the show, me as a player,
who was just happy as hell to be putting on a  uniform every day that had "Red Sox"
stitched across the front of it.

Back in 1988, Bell was a big, burly kid, with a tremendous presence. I called him the
Buford T. Pusser of the Carolina League. He walked tall and if he carried a big stick, he
definitely would've used it. Bell didn't take anything from anybody. He called them like
hesaw them and kicked you out of the game if you didn't like it. 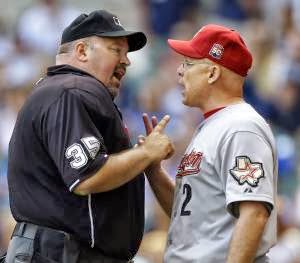 As a catcher, I was closer to the umpire than any other player on the field. For nearly three
hours every night, you can hear every grunt, groan, and word that comes out of a home
plate umpires mouth. You're so close to them, you can tell what they had for the pre-game
meal and see the stains from the sweat that can drown a man's shirt on those incredibly hot
and humid summer nights in the Carolina League

When Bell was behind the plate, you never had to worry about getting a game that
was called inconsistently. His strike zone didn't waver from game-to-game, or inning-to-
inning, for that matter. The life of minor-league player can be tough, but incredibly brutal
for an umpire. Working in three-man crews, there is not a team bus that takes them from
stadium to stadium in towns that most people don't know existed, and if they did, they
would never care to visit. Instead they have to drive their own cars and sleep in all those
cut-rate hotels that usually have a  6 or 8 on the end of it. Perhaps, one with a red roof if
they decided to splurge. 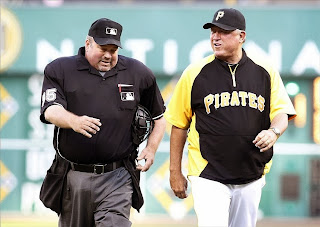 Bell never took the pain that comes from the miserable life of always being on the road
and living out of suitcases, onto the field. He was professional, powerful, and a person
that you knew had the ingredients to make it to the top of his vocation. Bell was also a
funny man with a quick wit and razor-sharp sarcasm. I remember asking him what the
heck umpires do for fun in the sleepy town of Lynchburg where our minor-league team
was based. "Ah, Lynchburg, Virgina, where the men are men and so are the women,"
I vividly recall him saying. "And the cockroaches at Harvey's Motel are often bigger
than me."

When Bell made it to the big leagues, I was not surprised. And when I heard the announcers
say, ".....and Wally Bell is behind the plate tonight", I would always get a chuckle and say
to myself, "Yeah, he was an umpire in the Carolina League way back when." 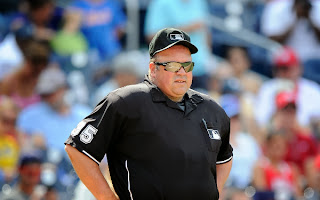 When I heard an announcer on ESPN talk about his passing, I was truly saddened. 48 years
old is way to young to die, especially when you're in the middle of a great career as a well-
respected umpire in the major leagues. But I was happy for Wally in that he had done what
so few umpires set out to do while working the "bushes" they call the minor-leagues. It's
a rough road, but Wally Bell made it and he will always be remembered as a great person,
as well as an umpire.