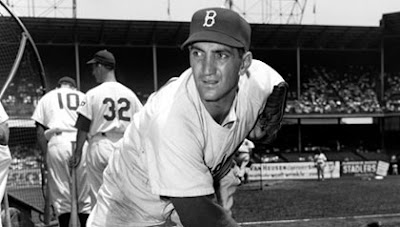 Ralph Branca will be always be remembered as the guy who gave up one of the most iconic
home runs in baseball history. Bobby Thomson of the New York Giants crushed a fastball
off the Brooklyn Dodgers pitcher for a walk-off win in the 1951 playoffs, making it "The
Shot Heard 'Round The World."

I will always remember Branca for so much more

Branca died Wednesday morning at the age of 90. He was a great friend and golfing
buddy of my father, who passed away eight years ago. They had a special friendship which I
benefitted from greatly.

I was addicted to baseball as a little kid, often playing from sun up to sundown with my
neighborhood friends. Branca would come over to our house and we'd have a catch in the
backyard. He saw my passion for the game and helped take it to an entirely different level. 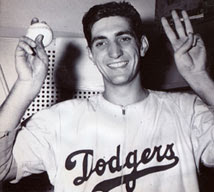 In 1974, when I was just 10-years-old, Branca, who married into the O'Malley family, whi
owned the Dodgers at the time, took me down to Shea Stadium to meet the team. Growing
up in Westchester county, New York, I was a die-hard Mets fan, but that all changed when
Branca took me under his wing on a hot summer night in July.

He ushered me into the clubhouse of the Dodgers, one that was filled with the likes of Steve
Garvey, Ron Cey, Don Sutton, and Reggie Smith. Most kids are in awe when they go
to Disneyworld to see Mickey Mouse and Donald Duck. I was in fantasyland that day
meeting major league players in a real clubhouse. Not a locker room, but a clubhouse which
was filled with buckets of bubblegum, sunflower seeds, and the greatest players in the world.

After introductions to all the players, Branca led me through out through the tunnel and
onto the field at Shea Stadium. Forget about being as happy as a kid in a candy store, I
was walking on cloud nine with the biggest smile the world has even seen.

I was on a big league field meeting all these players I had seen on television. There was
Tom Seaver and Rusty Staub of the Mets. Hey, there goes Tommy John and Davey Lopes.
Oh, my god, are you kidding me?!

Branca then took me back to the dugout to meet this coach who had an audience all his
own. He was loud when he talked, even louder when he laughed. The man had a bit of
a gut that was hanging over his leather belt as he sat on the green padded bench.
At the time, I thought everybody in baseball was in shape, but I guess coaches were a
different story.

It was Tommy Lasorda, who was the third base coach at the time. Branca introduced me
to Lasorda and he was very friendly, taking care of me like I was Branca's own little kid.

He said to me, "Paul, if you think I'm going to be the next manager of the Los Angeles
Dodgers, I will give you this hat." That hat had number 52 written under the brim. It looked
brand-spanking new as if it just came out of the box. It was Dodger blue with "LA" stitched in
white across the front of it.

Lasorda said the hat would be mine. All I had to do was say  I believed he'd be the
next manager of the Los Angeles Dodgers and he'd hand it over. I did. And he did.

This was the greatest day of my young life.

From that point on, I became a Dodgers fan, following them religiously while pretending
I was Steve Garvey, who became my favorite player. The hat Lasorda gifted me allowed
me to be the coolest kid in the school for a day. Of course, I wore it around even though
it didn't come close to fitting.


However, good 'ole Ralph Branca wasn't done being good to me. A few years later, while
our family was vacationing in Florida, the Dodgers legend suggested to my father he go
to the team's spring training site in Vero Beach.

My father got me in the car and we traveled a few hours to see the Dodgers play a spring
training game. Vero Beach was baseball paradise. A field of dreams lined with palm trees.
It might as well have been heaven to me.

We approached the clubhouse of the Dodgers and met a Japanese man named Nobe Kiwano,
who turned out to be the team's clubhouse man. My father said to him, "We are here as
guests of Ralph Branca." I looked around and didn't see any sign of Branca and wondered
what was going on.

Kiwano then said, "Come this way." He led me into the Dodgers spring training clubhouse.
My father stayed behind. I was like, "This is unbelievable."

That's pretty much the same thing I said when I entered the clubhouse and saw Steve
Yeager and Pedro Guerrero sitting side-by-side at their lockers smoking cigarettes.
I couldn't believe it. I didn't think any professional athlete smoked cigarettes and here
were two players I admired taking drags off butts like they were in a big hurry.

I was in a bit of a shock for a second, but was quickly re-set by the sight of Garvey
strolling through the clubhouse. He was the MVP in 1974 and my favorite player. Kiwano
saw my eyes, which had to be as big as half dollars, and he took me by the arm and
introduced me to Garvey.

The Dodgers first baseman asked me where I was from, how old I was, and what position
I played. I by-passed answering the first two questions and immediately told him I
was a first baseman just like him.

Man, that was awesome.

I went out on the spring training field, making like I was a seasoned veteran, even
though I was just 12-years-old. I was still wearing the hat that Lasorda and I was hoping
to say hello to him. However, he did indeed become the manager of the Dodgers and
every reporter was gathered around him asking him a bunch of questions.

I was lucky. Real lucky, thanks to Ralph Branca.

I saw Branca many times after that and played golf with him several times over the
years. He always took the time to ask  about my baseball career and offered advice to
improve my game.

When I heard the news that Branca died today, I lost a bit of my breath. He was
a wonderful man who was a great friend to my father and a person who brought me
so much joy and happiness by taking me to meet the Los Angeles Dodgers. News
of his death brought a tinge of sadness to my day, knowing it came just before
Thanksgiving.

I am so very thankful to have met Ralph Branca. I was lucky enough to have played
catch with a baseball star and soak in the advice he gave me along the way.

Rest in peace Uncle Ralph, you will be missed. 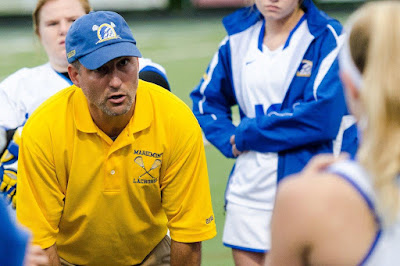 During his lacrosse career, Graham Harden was assigned to defend against the opponent’s most skilled attackman, those trying to penetrate the zone and fire the ball on net. Harden, a New Canaan, Connecticut native, was incredibly gifted with physical tools, smarts, savvy, and unquestioned toughness.
Harden weaved all that talent into an incredible legacy which he cemented at the University of North Carolina. He was named the National Defenseman of the Year in 1991, earning All-American honors in the process. Harden also captured ACC Player of the Year honors that same season and led the Tar Heels to a national championship. 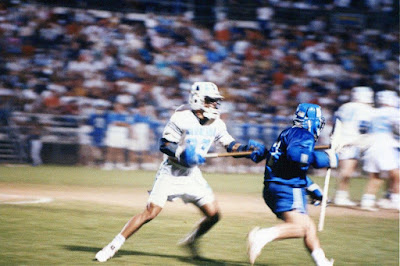 In 2012, Harden was voted to the ACC’s list of the Top 50 players of all-time, capping a lacrosse career very few have ever matched. 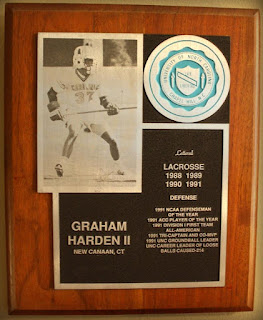 Today, Harden, who lives in Cincinnati, Ohio, is defending against another powerful opponent.
Graham Harden has ALS.
Harden received the devastating diagnosis in August after experiencing weakness in one of his legs.  A team of physicians concluded Harden had amyotrophic lateral sclerosis, commonly known as Lou Gehrig’s disease.
ALS is a progression neurodegenerative disease that affects nerve cells in the brain and the spinal cord.  Those afflicted with the disease eventually lose all motor skills throughout their entire body.
There is no cure or effective treatment for ALS. The average time a person has left to live after being diagnosed with the disease is just three-to-five years. 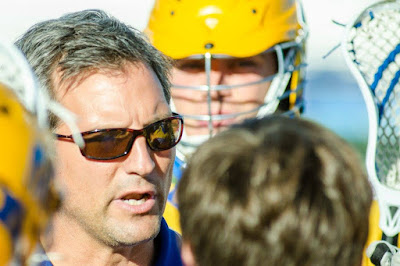 Life is not fair and it can be downright cruel. One only has to remember what happened on December 14, 2012 to realize that. 20 innocent children at the Sandy Hook Elementary school were slaughtered by a deranged gunman who had no regard for human life. It made me question hard the “everything happens for a reason” statement many of us like to lean when bad things happen.
I thought about life being so unfair and so cruel when I learned of Harden’s ALS diagnosis. Graham is one of the most wonderful human beings you could possibly meet. Forget about his legendary lacrosse career, Harden is about as solid of a person as a 150-year-old Oak tree in Waveny Park. 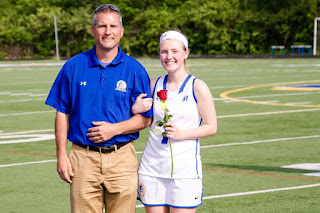 He’s been a pillar of his community in Cincinnati, volunteering as a firefighter and EMS member. He also lends his time and expertise as a volunteer coach at a local high school. Everybody loves Graham Harden and anyone who grew up in New Canaan and knew his family, loved and respected them, as well. 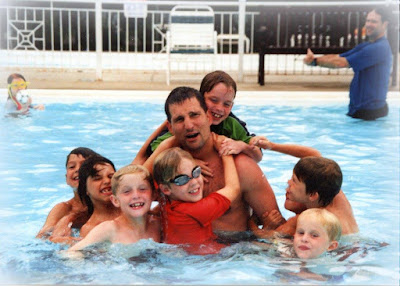 Lucy Gail, the mother of four wonderful children who all grew up to be amazing people, could be one of the nicest human beings ever to walk this earth. That's not hyperbole. Anyone who has met Lucy Gail will tell you the same thing.
Just as Graham did to his opponents during his brilliant career, he is taking the insidious disease that is ALS, head on. He and his brothers, Boyd and Holmes, both of whom were also All-Americans in lacrosse at UNC, and sister, Shea,  have formed Team Harden, coming together to battle ALS. 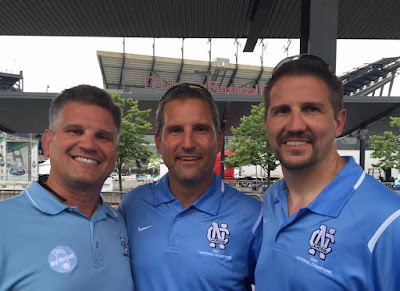 They have started “Game On! Graham Harden and G-Force against ALS.” The foundation raises money for research and medical care for those afflicted with ALS.
The Cincinnati community where the Harden family resides is also giving back.

Knowing there are three children and a wife to be taken care of, friends have initiated fundraisers to help with the financial burdens that will mount in the coming years.
As of November 1st, just over $78,000 has been raised through the G-Force campaign. The goal is $300,000. 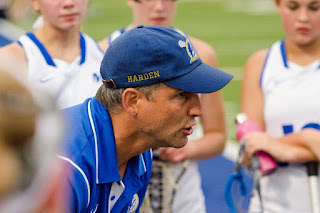 It is my hope the New Canaan community comes together to take help take care of one of its own. Graham Harden is a special person who made New Canaan proud. His entire family is part of the fabric of the small Connecticut town.
The road ahead is a tough one for Graham. He needs our help. 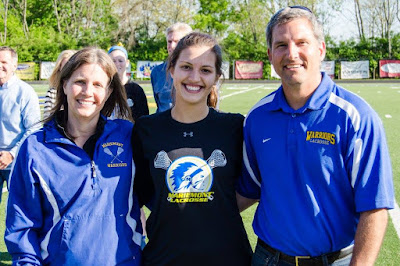 If you’d like contribute and help make a difference in the lives of Graham, the entire Harden family and others afflicted with ALS, you can donate via www.youcaring.com/graham-harden-ii-family-trust-660908/donate#wp
Posted by Paul Devlin at 4:50 PM 4 comments: