TOM BRADY IS A WICKED LOSAH! 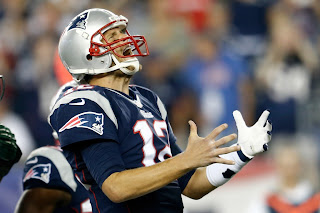 Boston is the greatest sports town in the country, but its fans can sometimes be the worst.
They overreact so badly, it's almost comical. Their knee-jerk reaction could send a football
through the uprights from 80 yards out. Want proof? All you have to do is listen to sports talk
radio in Boston or read all the threads about Tom Brady and his performance against
the New York Jets on Thursday night.

The Patriots quarterback pretty much came unglued as his receivers dropped passes, ran the
wrong routes, and looked at his wife Gisele the wrong way. OK, so the last one didn't happen,
but Brady looked like he was going to go all Mike Rice on his teammates and hurl footballs
at them from close range on the sideline. 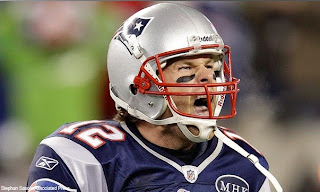 In his 14-year career, Brady has dressed down his receivers for blown assignments and dropping
passes before, but nothing like we saw on Thursday night. There were eye-rolls, head shakes, gestures with his hands, and screams at the top of his lungs. His favorite cuddly security blanket,
Wes  Welker is gone. The Gronk is still recovering from injury, Aaron Hernandez is sitting in
prison with all his tattoos, and Danny "China Doll" Amendola is hurt for the 238th time in his
career. It's as if Brady knows that Reche Caldwell, David Terrell, and Bethel Johnson are not
walking through that door, and he's a little pissed. 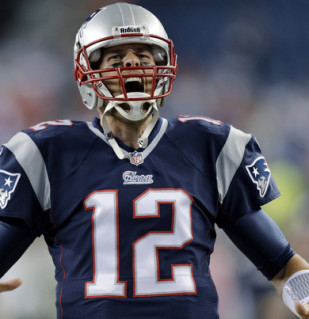 Brady re-structured his contract to free up money to re-sign Wes Welker and a few other stud
receivers and this is what Belichick gives him? Aaron Dobson and Kenbrell Thompkins? You'd
be rather pissed off, too. I almost thought Brady was going to bolt a GPS device to the helmet
of Dobson to give him an idea of where to go. If Dobson wasn't a second-round pick, which is
a miracle in itself, he'd be on the unemployment line today keeping Ochocinco company. 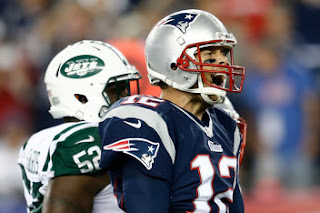 Patriots fans are blasting Brady for his pouting, ranting, and for showing up nearly everyone
outside of Robert Kraft. He was far from perfect, they say, overshooting Julian Edelman for
a sure touchdown pass.

Patriots fans: calm the heck down! Brady had a bad game all-around. His throwing, his
demeanor, all of his actions were un-Brady-like. It happens and yes, even to Mr. Wonderful,
Tom Brady. The Patriots have won a ridiculous 77 percent of its games with Brady as the
starting quarterback. He's driven to win, driven to be perfect. It's why the Patriots have won
10 or more games for 10 consecutive games which is incredible.

The Patriots are 2-0 with two division wins. They will be fine. Amendola and the Gronk will
be back soon and the offense will return to normal soon enough. If Brady could win while
throwing to Caldwell and a bunch of misfits seven years ago, he can surely win with this cast
of characters.

Relax, Boston, the Patriots are 2-0, not 0-2. You don't live in Jacksonville, where the Jaguars
have a guy named Blaine Gabbert at quarterback and that makes you already mathematically
eliminated. Things are going to be just fine, Boston. In your city, they usually are.
Posted by Paul Devlin at 9:19 AM