PAT TILLMAN: A CASUALTY OF 9/11 AND TRUE HERO 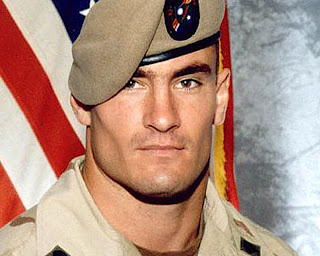 Pat Tillman didn't die on 9/11, but like thousands upon thousands of Americans, he died
because of it. Tillman, who was playing with the Arizona Cardinals, was so deeply affected
by the terrorist strikes on our home soil, he gave up his NFL career to enlist in the service
and fight for his country.

"Football's not important to me, serving my country is," Tillman said in 2002. It may not
have been important to Tillman, but it had been what defined him. He went to Arizona
State and was the 1997 Pac-10 Defensive Player of the Year as an undersized linebacker.
Tillman didn't have need any change of address cards as the Cardinals, who shared Sun
Devil Stadium with ASU, drafted him in 1998. 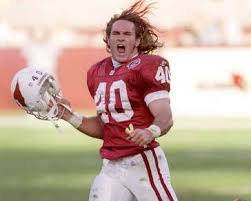 A free-spirit, Tillman was converted to free safety by the Cardinals and earned a reputation
as one of the fiercest hitters in the NFL. At one point in his career, Tillman turned down a
5-year, $9 million offer from the St. Louis Rams out of loyalty to the Cardinals.

But that show of loyalty was nothing compared to Tillman's belief that he should fight for
his country. There have been other professional athletes who had their careers interrupted
by a military obligation, but few chose to join the service under their own volition.

Tillman turned his back on a life that most people can only dream of. He was playing in
the NFL and making a good living at. He had the glory, the adulation, and a great future.
9/11 changed all that for Tillman. Despite getting a 3-year, $9 million offer from the Cardinals,
Tillman turned in his football gear for that of an Army Ranger. 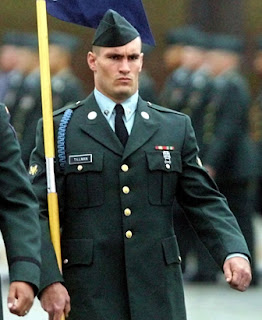 How many people would even think about doing that? People say they love our country but
if there was a poll taken, that would probably rank after our love for money, power, sex,
Facebook, and the iPad. And if 10,000 people were asked if they'd give up all that Tillman did
to serve our country, every one of them would've said, "Hell, no! Are you crazy, because
I'm not."

Tillman sacrificed everything. His job, his career, and even his marriage. He got married
to his longtime girlfriend just before enlisting in the military in May of 2002. 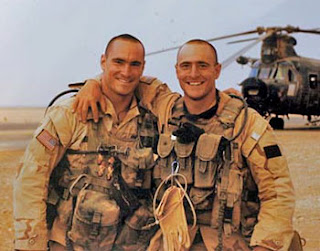 Along with his brother, Kevin,  Tillman became a Ranger and went on a few missions before
he was killed by his own battalion in a dangerous canyon in Afghanistan on April 22, 2004.
It was sad, tragic, and made even worse because the government lied to everybody at first,
saying that Tillman  was a hero and killed by enemy forces. But what Tilman did, giving up
the riches and the good life of the NFL, to serve our country should be admired. He should be remembered  along with the others who fought and died in wars that tried to rid evil and
destruction.

Nobody at Arizona State has forgotten Tillman. They have constructed the Tillman Tunnel
where he will be the last thing players see before going onto the field to take on an opponent.
It's a breathtaking tribute to a man who made the ultimate sacrifice. 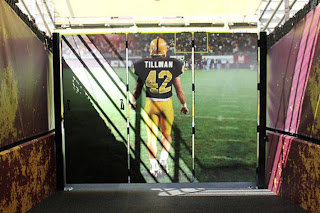 As much as people want to make sports bigger than life, it's not. I often shake my head in
disbelief when I here an announcer call a player a "hero" because he threw a game-winning
touchdown pass. I shake my head when they describe a player as having "courage" because
he went over the middle and took a big hit from an opponent. I laugh when they say that
a team has to play "like there is no tomorrow." It's just a bunch of guys playing a kids game,
for crying out loud. Nobody dies.

Pat Tillman is the definition of a true hero, one who showed unbelievable courage im not
only give up the good life, but in fighting for our country. Unfortunately, there never would
be a tomorrow for him. Tillman's life ended tragically in Afghanistan nine years ago.

Tillman, along with all the victims who perished on this day 16 years ago, as well as those
who lost their lives fighting for our country, should always been remembered. Not just on
9/11, but every single day.