UNC BASEBALL IN 80'S: NICKNAME U 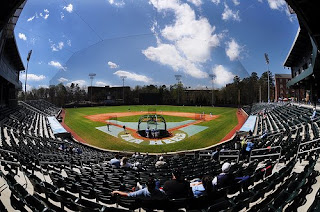 Major League Baseball is dressing down this weekend with their stunt of allowing players to
wear their nicknames on the back of their uniforms. Very interesting, but I don't think any of
the teams can match the nicknames of the UNC baseball teams more than 30 years ago.

The baseball program at UNC in the early 80's was like the Bronx Zoo South. It was crazy,
fun, and always entertaining. The team played hard, winning three consecutive ACC titles,
and laughed even harder. Every day was like "Animal House" and "Comedy Central" combined.
We were the  "idiots" long before Kevin Millar, Johnny Damon, and Manny Ramirez made it fashionable in Boston.

The clubhouse wasn't for the faint of heart, though. No matter what class you were in or how
well you performed on the field, you were open to teasing and  serious  abuse. It just came with
the territory back then.

I often joke with a  former teammate that if some of the stuff from back then happened in
today's  quick-trigger lawsuit and politically correct world, there would be arrests, payouts, and penalties from the NCAA. It went far beyond a PG-rating. 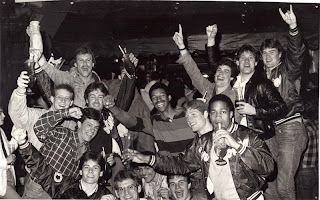 We were definitely a cast of characters loaded with talent, but also filled with an array of personalities from the strong to sophisticated, serious to the downright comical. And anyone
who came through the doors of the program, usually left with a nickname that stuck with them forever.

Everybody had a nickname, even the father of our coach, Mike Roberts. A 70-something man
who bore a striking resemblance to those California raisin caricatures, Mr. Roberts was "The
Bark Man".  Every time he talked, he sounded like a dog in heat with a muzzle on. Arrrr, arrrr,
arrrr, arrrr. "The Bark Man" name fit him to a T. He also owned a lumber company which had
a lot to do with it, too. 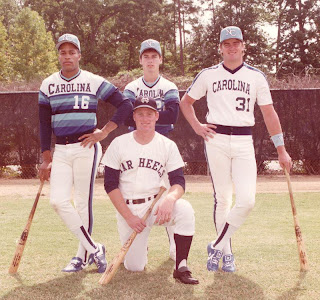 There wasn't a formal system for tagging people with nicknames the way they did in
"Animal  House." There wasn't a "Flounder" or an "Otter" and nobody asked why a certain
nickname was chosen. It was just because--- and it always stuck

Paul Will was a heavy-set first baseman from Newark, Delaware. Everything about him was big.
His legs, his gut, his head, and appetite were extra large.When he went though the line at the
training table, he supersized everything long before McDonald's made it part of its menu. He'd
fill a Vince  Wilfork-sized bowl with a  million fries. So, he became "Paul Will Bowl-of-Fries", which got shortened to bola fries, or just bola. 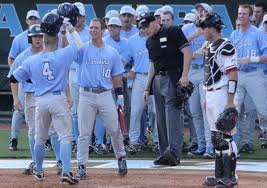 A few players had multiple nicknames. Doug Torborg, a lefty pitcher out of New Jersey,
looked like he was almost made of plastic. His hair was perfect and he spent a lot of time in
the mirror making sure he was all buttoned up. He became "Mr. Make Believe", which was
shortened to just "Make". Torborg got tagged quickly during orientation week when we played
baseball all day and drank at night. Torborg always complained that he felt like the "bed
was spinning" when he woke up the next day. So, of course, he became known as "bed spins."
Not Doug, not Torborg, but "bed spins."

Jon O'Leary, a barrel-chested outfielder who was one of the best batting practice hitters in the
history of college baseball, got stuck with a few nicknames he wasn't too enamoured with.
O'Leary minored in baseball at UNC but majored in eating. If it wasn't nailed down, Johnny O
ate it. He was known as "Snackbar McPortals" or "Johnny Canteen". Whenever we approached a
Shoney's restaurant on a road trip, Mike Jedziniak would yell out "There he goes!" as O'Leary
made a b-line to the front of the bus to make sure he was first in the buffet line. There wasn't
much left for anyone else after Johnny Canteen was finished loading up his plate. O'Leary once
complained to Jedziniak about his nickname and Jedz responded, "Too bad, that's what we're
calling you."

Chris Mench was usually the master of the monikers, tagging anybody in his path with creative
and often unflattering nicknames. Mench was known as "The Big Cheese". His head was the
size of pony keg. If you tapped it, suds would probably come flowing out. But the size of his
head had nothing to do with his nickname. He called himself the "Big Cheese" and I'll just
leave it at that. Most of the nicknames the "Big Cheese" gave out were X-rated, which
unfortunately, means I can't put them in print. 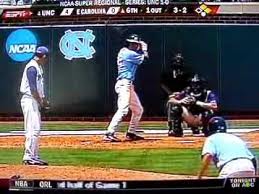 My favorite nickname of all-time was "Yard Bird". This was given to Mitch McCleney, a
second-baseman who spent at least six, possibly seven years in the program. Somebody
thought he looked like a yard bird, so McCleney became known simply as, "Yard Bird."

Al Taylor, a popular teammate from Natick, Mass. had a plethora of nicknames. He was
"Grinch", "Slate", and "Sack Exchange." Bill Robinson, a tall, lanky pitcher from New Jersey
was the "black momba" long before Kobe Bryant showed up on the scene. Robinson was also
known as "Snake", "Bridge" and "Q-tip" after the tiny head that rested atop his broad shoulders. 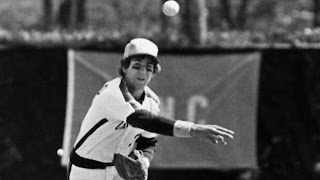 Walt Weiss, the former manager of the Colorado Rockies, also had a very small dome. His head
was so tiny and shaped like a peanut that he had to tape the adjustable strap on his hat to make it
small enough so it would say on. Weiss became known as "The Peanut Man."

Jeff Hubbard, a talented third baseman, who was a cross between Tom Sellick and the Marlboro
man, only knew four people on the team. They included B.J. Surhoff, Walt Weiss, Jedziniak, and
Nora, the smoking-hot team trainer. Funny thing, Hubbard never had a problem remembering her
name. Everybody else to him was either "Yo", "Dude", and "Hey".

During one game, Hubbard, who drove around campus in a Porsche 911, was trying to get
the attention of a freshman pitcher he never even noticed before. He turned to Weiss at
shortstop and  asked, "What's this guy's name?" Weiss didn't know either so Hubbard, known
as "Marv" after  the Oakland Raiders fullback, yelled out, "Hey, Butch". And a new nickname
was born. Ken Turner became forever known as "Butch." Not sure if anybody ever even
knew his real name. He was just "Butch."

There were other classic nicknames like, "Minnow man", "Mushroom," "Lid", "Hawks",
"Jar head", "Thermometer", "Black Bird", "Newborn," and "Crow." There are many others,
but Father Time has sapped a bit of my memory and I've forgotten more than a few of the
classic other ones that existed.

Look around major league baseball, and you'll notice that great nicknames have pretty much
become extinct. Oh, sure, there was A-Rod, A-Gone, and A-Hole, but those took no effort and
lack creativity.

Great ones were part of UNC program during the 1980's and it sure made for some rip-roaring
funny times.