BILL O'BRIEN DOES THE RIGHT THING 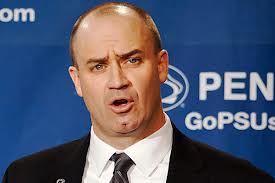 Let's face it, the world of college football has become one giant money grab.
Schools play hop scotch across the country to join the super conference that
will line their pockets with mega million. Coaches are always looking for that
next springboard to launch them into the highest tax bracket in America.
Loyalty? Forget about that. It disappeared about the same time acid washed
jeans and Members Only jackets got flushed down the drain.

However, in a fraternity that's filled with leaders like Lane Kiffin, who have
dollar signs in their eyes and little else, Bill O'Brien showed that some
integrity still exists. After leading Penn State out of the worst scandal in college
sports history, O'Brien was a hot commodity for the NFL's coaching carousel.
He managed to squeeze eight wins out of a team that few believed could even
win a single game. 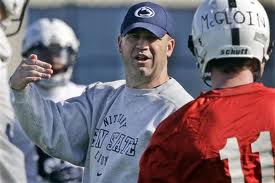 O'Brien interviewed with the Cleveland Browns, a franchise desperate for
a winner and probably eager to open up the checkbook to give O'Brien
whatever it took for him to leave Happy Valley for the valley of heartbreak
and 12-loss seasons. O'Brien said thanks, but no thanks.

The lure of a monster contract and the NFL was tempting, but for O'Brien,
there was more to life than coaching on Sundays. Loyalty mattered. So did
his word.

When the NCAA tagged Penn State with unprecedented sanctions, O'Brien
had to execute he biggest sales job since the Marlins convinced the city of
Miami to fund a stadium. Oh, yeah, they'd even put the name "Miami"
across the front of their uniforms in exchange for about $400 million.
O'Brien's job was much tougher than the con Jeff Loria and company
pulled on South Beach. 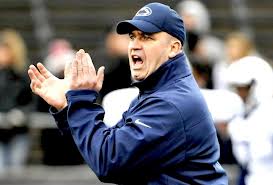 The NCAA gave every player at Penn State a free pass. They allowed
them to transfer to any school they prefereed without being forced to
sit out a year which is required of all transfers. Nine players left, including
Silas Redd,  a preseason All-American running back, who had a BCS
championship on his mind when he bolted for USC.

O'Brien convinced everyone else to stay and help Penn State out of the
cess pool it had launched themselves into, thanks to Jerry Sandusky, Joe
Paterno, and an administration that chose to look the other way rather
than save little children from a sexual predator. O'Brien talked of
commitment, dedication, and integrity.

So when the NFL came calling, he had to walk the walk. He talked the
talk last summer when he told his players not to be sellouts and leave
Penn State behind. He pleaded with them to be part of something special.
Taking the easy way out was an option, but staying and playing through
adversity would be far more rewarding. 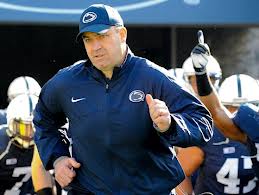 O'Brien walked the walked. He lived by his law and did the right thing.
To leave after one year and a bigger paycheck would have gone against
everything he had preached to his players. If he had gone to the NFL,
O'Brien would've been perceived as a bigger sellout than Lane Kiffin,
who left Tennesse after boatloads of promises and just one season
in Knoxville.

There are plenty of rich coaches in college football. Bill O'Brien is one
of them, but he has something most of the others don't. Integrity.