Newtown, Connecticut wants to grieve and try to recover, but it just can't. Every

time it moves an inch towards clearing a small hurdle on the road to normalcy,
somebody drives a stake into the gaping wound the entire community suffered
on December 14.

The people in that quaint, New England town appreciate the well-wishes that have
come from around the world, but they don't want their tragedy to turn into the
longest-running sympathy sideshow there has ever been. Unfortunately, the stupidity
of others is preventing that from happening.

On Thursday, the Stamford Advocate, a newspaper circulated less than 30 miles
from the tragedy at Sandy Hook Elementary School, ran an article about the opening
of the new Sandy Hook Elementary School. Trouble was, the paper tagged a  rather
large advertisement for an upcoming fire arms show in  Stamford, on the same page
right next to it. That's right, 26 people were killed by an arsenal of weapons, but be
sure to see the East Coast Fire Arms Show on January 5th and 6th! 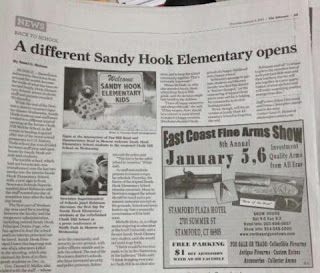 Really? How stupid and insensitive can you be? They could've run that promotion
on any of the other 120 pages of the newspaper, but it runs next to an article
dealing with one of the worst shootings in school history? Paul Osmundson, editor
of the Stamford Advocate, in the understatement of the year, called it, a "terrible
mistake."

Oh, I'm sure someone will try to blame it on a miscommunication, being overworked,
or perhaps, ADD. Whatever. None it is going to fly. Mistakes happen, I know, I've
made a ton of them. But how the hell does anyone make a mistake like that?

Jean Henry, a staffer on the state of Connecticut medical exam team made a mistake
by letting her husband view the dead body of gunman, Adam Lanza. Yep, Henry
called her husband into what essentially became a crime lab to look at the the guy
who shot and killed 20 small children and seven adults, including his mother. She
showed him off and seemed to be proud of it. Good, grief. Reports surfaced on
Thursday that  Henry was placed on administrative leave. How do you think the
parents of all those dead felt after reading that? Haven't they endured enough? 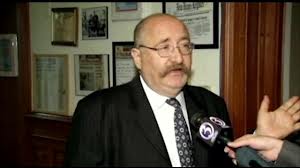 I thought enough was enough when I saw that Irv Pinsky, a New Haven-based
lawyer, filed a lawsuit against the state on behalf of the parents of a child who was
lucky enough to survive the massacre. Pinsky claimed the state was negligent for
not protecting his client against "foreseeable harm."  He even put a figure on it to
the tune of $100 million. How insensitive and how utterly stupid is that?

Did Pinsky think he was going to gain sympathy or accolades from the public for
representing a child and parents who were "traumatized" by the shooting? Two
weeks after the unspeakable tragedy, Pinsky and his clients seemingly wanted to
run to the front of the line to make sure they get "theirs" first.

Folks from around the country let Pinsky know how they felt, showering him
with about 50 death threats, according to him. Pinsky withdrew the lawsuit in
order to "calm the divisiveness and tremors." Yeah, the ones you caused by your
own stupidity. Stupid, stupid, stupid.

Can't everyone just let Newtown grieve. Can't we all just let them be.