Sweetness. Rarely has a nickname suited an athlete more perfectly
than the one given to Walter Payton during his college days at
Jackson State. Payton was a kind, gentle, and humble man, who
morphed into one of the most electrifying and fascinating players
the game has ever seen. He could vault over lineman and land
untouched into the end zone. 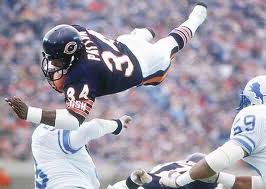 Payton would sometimes bury his helmet between the numbers of
250lb linebackers and turn them into road kill on the way to a
65-yard  touchdown run, which he sometimes accentuated with
the straight-legged kick of the leader of the drumline as he
waltzed into the end zone.

Payton kept on running until he earned a place into Pro Football's
Hall of Fame. He was, is, and always will be the face of the
Chicago Bears. But Walter Payton died too soon, the victim of
cancer, an opponent he couldn't outrun, run over, over give one
of his patented stiff-arms to. Bears legendary coach Mike Ditka
called him one of the greatest people he had ever met. The
NFL named its Man of the Year award after Sweetness, an
honor that is coveted by every player in the league. 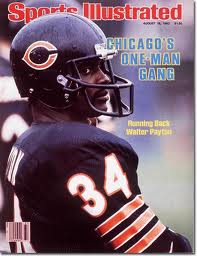 Now, 12 years after his death, Jeff Pearlman is showing off
Payton's ugly blemishes. In his book, "Sweetness: The enigmatic
life of Walter Payton", set to go on sale October 5th,
Pearlman paints the picture of an icon who abused painkillers
after his career, talked about suicide, and had an uncomfortable
marriage. Pearlman, a talented and detail-obsessed writer, has
become an expert in painting people in a bad light. He was the
scribe that John Rocker brought along for that fateful ride on
the 7 train in New York City and decided to spew all those
ugly comments that offended every ethnic  group and homosexuals
throughout  the world. Rocker was  a bad guy, but he never
recovered  from Pearlman's portrayal of him in that issue of
"Sports Illustrated." 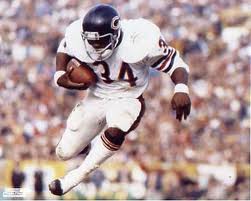 Pearlman's revelations shouldn't really shock anybody. After
seeing Tiger Woods, Brett Favre, Magic Johnson,  and even
Mickey Mantle exposed over the years, nobody is really surprised
by anything anymore. Superstar athletes are human like the rest
of us, sometimes filled with demons and hardships just like
the average Joe.

Payton abused painkillers? Add him to the thousands of current
and former NFL players who've had that same problem.
Remember Brett Favre? He almost died from them. Walter
Payton played 13 years in the NFL and never missed a
game. He had 10 seasons in which he carried the ball more
than 300 times. And he did it while playing on one of
the worst surfaces in the NFL. The turf at Soldiers Field
was akin to playing on concrete.

His offensive line during his early years in Chicago was akin to a
sieve and Payton paid  for it. Sweetness was not a big man. He
had massive thighs, a  ballerina's waist, and the biceps of a young
Arnold Schwarzenegger, but was listed at 5'10, which was probably
his height in his make-shift platform shoes which he used when
running up  hills during his grueling and legendary off-season
workouts. His  body took an incredible amount of abuse during
his NFL career and the pain he suffered didn't go away when he
hung up his cleats. Payton needed something to cope, and
painkillers, apparently were the answer. Not really surprising, is it?

Pearlman writes that Payton talked of suicide. As tragic
as it may seem, a great deal of people in our society do
the same thing. Some athletes, as we've seen recently,
(Mike Flanagan, Hideki Irabu, Dave Duerson, Wade
Belak, and Rick Rypien) actually went through with it.

An uncomfortable marriage? There isn't enough space
to fit all the people in that category. Walter Payton was
human with personal problems that millions of people
in society face everyday. Pearlman can try to bring
him down as much as he likes because that's what writers
do to sell books and make the New York Times
best-seller lists, which means more money in their pockets.
Herschel Walker has a book and admits he had as
many personalities as Sybil. Sugar Ray Leonard has
a book where he says he was sexually abused. What?
We never heard of anything like that before. Exactly,
Books wouldn't sell if they covered the same things as
as everyone else. They have to be controversial and explosive.
We've seen it many times before, we'll see it many times
again. 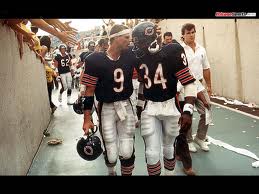 When I was 13 years old. our family moved to Lake
Forest, Ill. which is where the Chicago Bears have trained
for many, many years. Their football fields were just about in
our backyard, literally. My dad used to take me to see
Walter Payton practice. Payton was almost a god-like
figure, much like Ted Williams was to Red Sox fans.
The first NFL game I went to in person, Payton ran for a
then-record  275 yards. He did it with a 101-degree temperature
and a  serious case of the flu. I admired him, while many in Chicago
deified him. My grandmother, who came over from Ireland
and settled  in the south side of Chicago, was a racist. She didn't
like black people. But oh, did she love Walter Payton. She
worshipped him. People didn't see black and white when it
came to Payton, he was a legend and hero to many.


12 years after his death, people in Chicago and around
the country still worship Sweetness. He was loved by
all his teammates, respected throughout the league, and
admired by nearly everyone whom he touched. Many
people in the Windy City consider what Pearlman is
doing, blasphemous. However, his "findings" shouldn't
tarnish his legacy. Never. Payton was a great man, with
his own faults and demons. He's forever "Sweetness", a
person and player the NFL will never see again.
Posted by Paul Devlin at 1:17 PM