DIANA NYAD: A TRUE INSPIRATION TO THOSE WHO SAY, "I CAN'T".

With the premiere of "Moneyball," the Red Sox riveting collapse,
and another NFL weekend, it was easy to miss the incredible mission
that Diana Nyad started at 6pm on Friday in Cuba. The 62-year
endurance swimmer jumped into the water to begin her goal of
swimming 102 miles to Florida. 102 miles through shark-infested,
man-o-war stinging jellyfish, and whatever lies the beneath the
surface of the waters of the Florida Straits. Nyad is doing all this
without a cage to protect her. It's a true open-water swim. 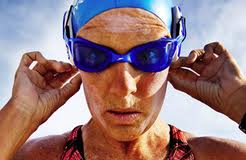 Think about this for a second. A 62-year old woman swimming
for more than 40 hours through elements that are best described
as vicious. Swimming through the Florida Straits when it's pitch
black out, knowing there are a lot of creatures below the surface
that can end your mission, not to mention your life, is downright
scary. No sleep, no security, no hot showers....this is borderline nuts. 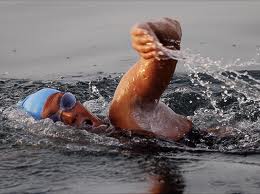 During Nyad's swim, she suffered stings from man-o-war
jellyfish that have supersized her face, arms, and neck. Nyad stopped
once because of it, boarding a boat to get medical treatment. This
altered the swim from a record non-stop one, to a staged one. But
really, does that matter at all when you're trying to swim 102 miles?
Hardly. Nyad has seen a curious oceanic white tipped shark cross
her path. A school of 10 whales appeared in front of her. And she's
already come face-to-face with jellyfish.

Talk about courage and mental toughness. This is the true test of
it. Nyad tries passing time by singing songs, but with the average
one lasting just over three minutes, that doesn't help very much.
The will to keep on going is off the charts. The drive to keep on
swimming when toxins from jellyfish stings are tearing up your
body is beyond words. 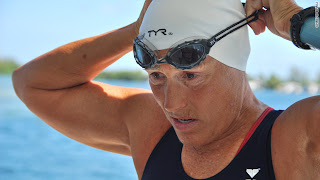 An alert came across the screen of my computer a few minutes
ago, Nyad's quest to swim through the Florida Straits was over.
Doctors warned that more stings from jellyfish could cause death.
It was over. More than 40 hours, 50 miles,  and 100,000 strokes
and Nyad was done.

Critics will say that Nyad failed again. She had tried the same
swim when she was 28-years old and did not finish. Nyad attempted
the journey once again in August. Once again, she stopped, this
time because of an 11-hour asthma attack. Today, Nyad stopped
because the stings were just too painful and too dangerous. 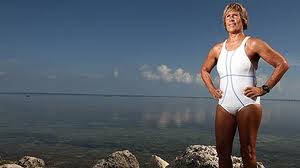 However, Nyad did not fail. She is a true inspiration to all those
who say, "I can't". She is a hero to all those who say, "I'm too
old, too weak, and not talented enough." She is someone to be
looked up to her for her iron will and determination. She should
be admired for her persistence, courage, and dedication. Nyad
may have stopped, but she did not fail.
Posted by Paul Devlin at 10:23 AM