I SHOWERED WITH EVAN LONGORIA AND LIKED IT

Evan Longoria's walk-off home run put the exclamation on
what was, arguably, the greatest night of baseball in regular
season history. Four games and two walk-offs decide
the final two playoff berths. It was simply unbelievable. The
heart pounding, jaw-clenching theatrics brought back memories
of one of the funniest moments I've ever had covering the game. 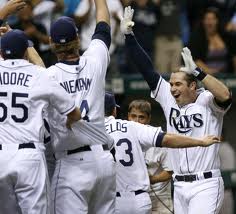 On September 27, 2008, almost three years to the day of
Longoria's home run monumental home run against the Yankees,
the Tampa Bay Rays celebrated their first-ever division title
and a trip to the playoffs. This downtrodden franchise that
had experienced nothing but failure and a name change, busted
loose in a way that few teams ever have when it comes to
champagne celebrations. There was the obligatory music
blaring at decibel levels that would bring down a building
and the goggles to protect the eyes of the players as they
poured the bubbly and beer all over each other like the kids
in the "Bad News Bears." 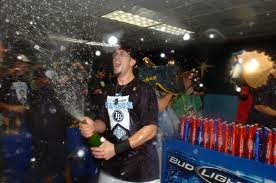 But when you've been the doormat of baseball for so long, playing
in a city where people still don't know a major league
franchise resides there, well, let's say there are no boundaries
when it comes to partying.  This clubhouse was like "Animal
House". The only thing missing was Dean Wermer's wife
making out with the players. It was off the hook wild.

During the celebration, I crossed paths with Longoria
and asked him for an interview. He was already a little
buzzed because the team actually finished their game against
Detroit, went to dinner, then came back after learning the
Yankees had lost to the Red Sox in a rain-delayed game,
giving the Rays the division title. Longoria obliged. What
happened next was pretty funny.

Grant Balfour, then a reliever for the Rays, gave me a shower that
I've never quite forgotten. The beer he doused me with was so cold,
it could have been kept on ice since the birth of their franchise
in the  '90's. I was cryogenically frozen. Ted Williams corpse
in the tube in that Arizona laboratory never reached the temperatures I
experienced that night. My cameraman did a phenomenal job of
zooming out while the near-frozen liquid was pouring down
on my scalp and neck. I wanted to scream and say,
"WTF!?",  but didn't. I was proud of the way I kept my composure

during the interview,  especially since my scalp was screaming
in pain and what little brain I have, was not exactly comfortably
numb.
As Longoria was rounding the bases on Wednesday night, my thoughts
turned to that day back in late September of 2008 and I wondered
which reporter might get a shower and a brain freeze like I did that
crazy night in Detroit.
Posted by Paul Devlin at 11:07 PM