"MONEYBALL HITS ONE OUT OF THE PARK

"Moneyball" is brilliant. It's not easy to turn a movie about baseball
and the implementation of something called sabermeterics into
a blockbuster hit, but Brad Pitt, Jonah Hill, Philip Seymour-Hoffman,
and a cast of actors who deliver spot-on performances, deliver like
Mariano Rivera in the 9th inning of a pressure-packed, can't-
look-til-it's-over game. 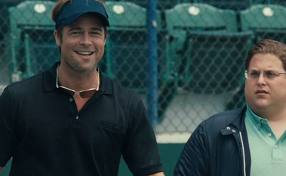 This film is easily one of the best of the year and instantly deserves
its place among the best baseball movies ever made. If you're
a casual baseball fan, you may become addicted to it as you are
Facebook after seeing "Moneyball". If you're a baseball junkie
who gets a rise out of on-base percentages, WHIP's, and OPS's,
then you will  probably see this movie twice in a week. It's
that good. 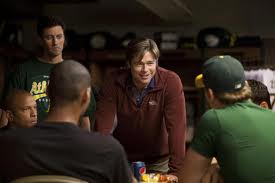 What makes the movie all the more impressive is the detail
in which the producers go through to make the baseball
scenes incredibly realistic, which is hard to do. Remember
"Bang the Drum Slowly"? Those actors couldn't make their
high school baseball team.  "Field of Dreams" was phenomenal
but they had Shoeless Joe Jackson,  one the greatest pure
hitters in the history of the game, if not one of its most polarizing
figures, hitting right-handed when he was actually a lefty. 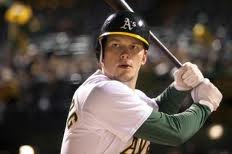 The actors playing David Justice, Scott Hatteberg, and
Chad Bradford, were so similar to the players with their
appearance and mannerisms, it was scary. Even the guys
playing Mike Sweeney and "Everyday" Eddie Guardardo
were so good, I wondered if the former major leaguers
had come back for cameos.

Only the most astute baseball fans notice how Tim Hudson
wears hit hat so low that you can barely see his eyes. That
was spot-on in the movie. David Justice and that little flick
with the leg kick? Carbon copy in the movie. Seymour-Hoffman's
impersonation of Art Howe was scary good. Howe might
be a little upset with the big boiler (gut) Seymour-Hoffman
had because the former A's manager was thin and good shape, but
that was the only thing that was a little off. 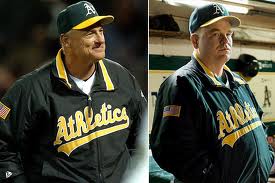 Pitt, who admittedly, doesn't like baseball very much, puts
on a performance that is worthy of an Oscar in his portrayal
of Billy Beane, the A's general manager who tries to reinvent
the game by using stats to find and use undervalued players
whom nobody else wants.

"Moneyball" has some LOL lines throughout the film. Baseball
and the characters in it, usually provide enough great material
for a sit-com, but "Moneyball" took it to the next level. During
a meeting with his old and crusty scouting staff,  Beane (Pitt)
was trying to find player to replace Jason Giambi, Johnny Damon,
and Jason Isringhausen. Scouts were throwing out names of
players who might and might not be candidates. In describing
one player, the scout said, "His girlfriend is only a 6, so that
means he doesn't have any confidence." 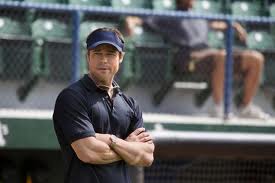 The A's and their $41 million dollar payroll, or about $7 million
dollars less than what the Yankees are paying A-Rod and Derek
Jeter, come close to "reinventing" the game and getting to
the World Series. "Moneyball" did change the way a lot of
general managers scout and put together their teams. The Rangers,
Rays, Red Sox, Indians, and Padres, are all proponents of
"Moneyball". Billy Beane's theory has had a definite impact
on the game. Pitt's performance and the filmmakers expertise
puts "Moneyball" in a class all its own.
Posted by Paul Devlin at 7:24 AM