THE RE-BIRTH OF BILL BUCKNER

That life-saving catch by Bill Buckner in Sunday night's episode of
"Curb Your Enthusian" did more than just keep a baby from dying. In a
way, it gave new life to a tourtured soul who had part of himself killed
off during a reality show in 1986. 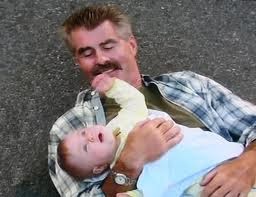 When Mookie Wilson's painfully slow dribbler went through Buckner's
legs in the 1986 World Series, he became the biggest goat in the, then-
bitter and painful  history of Boston sports. Even though it was only Game 6
and the rest of the team botched a 3-0 lead to the Mets in Game 7,
Buckner's fate was sealed.

Fans in New England blamed Buckner for losing the World Series,
the weather, and the reason they never got laid in a bar filled with
naked girls at Sonsie's on Newbury Street. It was "Buckner Sucks,"
"He pulled a Buckner" and "I hate Billy Effin Buckner". Ernest Byner
never caught as much heat for fumbling away the Cleveland Browns
chance at going to the Super Bowl. Jackie Smith never had to endure
the shame and pain like Buckner after he dropped a sure TD pass
for the Cowboys in the Super Bowl XIII loss to the Steelers. Donnie
Moore didn't bother stick around very long after giving up that home run
to Dave Henderson of the Red Sox with two strikes and two outs
in the '86 ALCS. Instead of sending the Angels to the World Series,
Moore sent himself to an early grave, committing suicide a short
time later.

Bucker carried the pain and embarrassment from that chilly night
in New York 25 years ago. As much as he denied it, the mental
anguish had to be eating him up. People forget that Buckner was
a really, really good player. Over the course of 22 seasons, Billy
Buck hit .287 and accumulated 2,715 hits. 285 more and he's a
lead-pipe lock for the Hall of Fame. However, that was all washed
away when Buckner made that Big Error in the Big Apple.

But after last Sunday's performance with Larry David on "Curb
Your Enthusiam" don't we look at Buckner a little differently?
He was a good sport, getting abused once again by Boston
fans who couldn't forget that error in '86. A Jewish ritual wasn't
allowed to proceed until Bucker left. He missed a soft-toss
and watched an autographed ball from Mookie Wilson go
out the window and onto Madison Avenue. And finally, when he
came out of the hotel, he had to endure taunts from fans who
screamed, "Buckner sucks!". Oh, I know it  was only made-for-tv,
but that is what Buckner was forced to endure for many, many
years of his real life.

Boston fans softened up on Buckner a few years ago, after winning
its second World Series in four years, Buckner was asked to throw
out the first pitch on Opening Day. He delivered a strike and an
entire region seemed to exhale and give Buckner the pass they refused
to give for what seemed like forever. I guess when you reside in a sports
town with champions like the Sox, Celtics, Patriots, and Bruins, it's a little
easier to forgive. 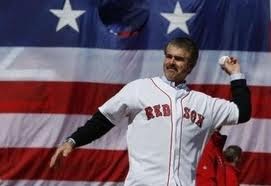 Buckner had to endure more than any man should after making that
real-life blunder, it's kind of ironic that a life-saving catching in the world
of make believe, made us see Buckner in a whole new light.
Posted by Paul Devlin at 8:03 PM