'BRUIN' SOMETHING SPECIAL IN BOSTON 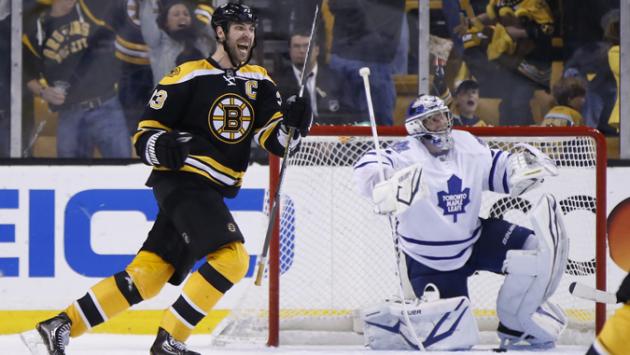 If you've never been to Boston, get there before you're too old to fully enjoy it. If you're in the
sports media, try to get a job there because one hasn't truly covered sports until they do it in this
town. There is no place on earth that can match Boston's charm, education, energy, diversity,
sports, and most of all history. Ever since Paul Revere bolted from out of the gates in Boston
for Lexington in 1775 to warn everybody that the British were coming, the city has been a
magnet for unbelievable events, both good and bad.

On April 15th, two bombs rattled the city to its core during the beloved Boston Marathon. It was
a devastating blow that knocked not only Boston, but the entire region flat on its back. This was
the worst event on its home turf, one that tested the resolve and spirit of a city that has great pride
and people fiercely loyal to it. But Boston is strong and resilient and it's well on it's way to
recovering. 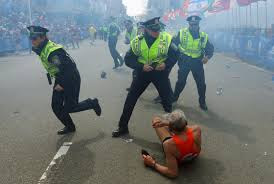 Another chapter was added to annals of the city less than a month later, as the Bruins pulled off
a remarkable comeback in the NHL playoffs on Monday night. I realize that sports is not life and
any event pales in comparison to what happened at the Boston Marathon, but there are some
parallels between the two, and things to be admired. And in terms of sports, this was big, really big.

The Bruins were down 4-1 in the third period of Game 7 of the playoffs. The Fat Lady wasn't
singing, but she had the vocal cords humming and Toronto's bus was warming up outside the arena. Keep in mind, no team in NHL history has ever come back from a three-goal deficit in the
final period to win the deciding game.

Flat on its back, the Bruins mirrored the passion, energy, and dogged resiliency the entire city
showed in the aftermath of the bombings. They, like Jeff Bauman, who lost both legs in the horrific
event, didn't sulk, quit, or feel sorry for themselves. They stood strong, just as Bauman has done,
in the face of adversity, when all seemed lost. If they were going to go down, they were going to
go down having squeezed every ounce of energy they had left in their tanks. 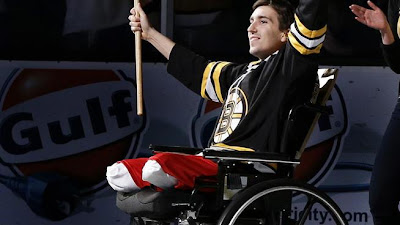 The Bruins trailed 4-2 with just under 90 seconds to go. There was NO WAY they could possibly
come back and tie it. They not only tied it, but Pierre Bergeron's goal in overtime won it for them.
The city, which is still very much in mourning and pain, let loose. The celebration was like a
power cleanse that led to total euphoria.  This was another great  moment in a sports town overflowing with them. This electrified a city still recovering from a  broken heart. This
comeback allowed the city to pump up their chests and yell out, "We are wicked Boston Strong!" 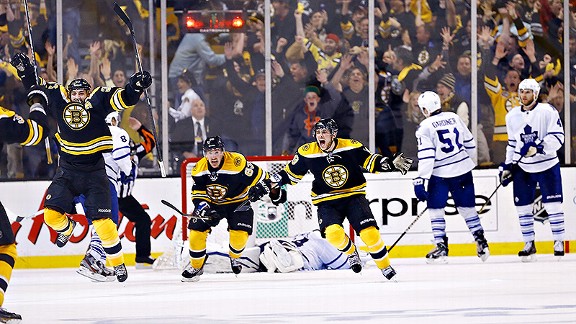 With all that's happened to Boston in the last month, one has to begin to wonder if this is all
part of a bigger plan. A moment like last night, which wreaks of destiny, has a way of powering
a team and a city to much bigger and greater things.

This script could have an ending produced straight out of Hollywood. The Bruins hoisting the
Stanley Cup and then parading down Boylston Street, the same one rocked by two bombs. It
would show everybody that the city is truly Boston Strong and nothing, not even two terrorists
could rip it apart. 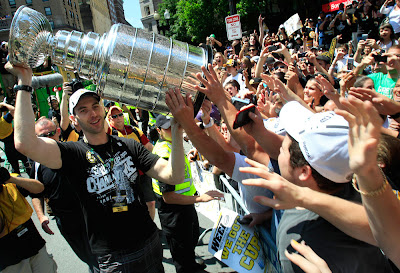 Yes, the city is still hurting and the pain may never truly go away. But a championship could
provide more relief for city and all the victims. It could be another way to honor those who
lost their lives.

The team is still 12 wins away from making that happen, but the amazing comeback win has
galvanized the city and something tells me, there's something special 'bruin' for a town that
is truly special.
Posted by Paul Devlin at 8:05 AM