JOE SOLIMINE: KING OF PELHAM DIGS IN AGAINST CANCER

In an "all about me world", Joe Solimine has always been about helping others. For more than
40 years he has been the pillar of Pelham, New York, giving his time, money, and giant-sized
heart to support a close-knit community that's just a Ruthian shot away from the Big Apple.

Solimine is the Babe Ruth of Pelham, a man who seems bigger than life with his 6'3' frame,
booming voice, and magnetic personality. He's the kind of person you meet once, and remember forever. Solimine is the former town supervisor and has been on the board and nearly every committee with Pelham's name of it. He is a remarkably unselfish man who gives, gives, and
gives some more to ensure  that everyone in his town is  happy and taken care of. 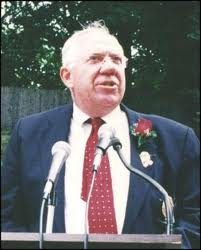 Now, the people of Pelham are trying to take care of the man who has given them so much. In
February, Solimine was diagnosed with leukemia and needs a bone marrow transplant. The town
has organized bone marrow drives to help find the match that Solimine and others need. There
is an 80 percent chance of finding a bone marrow match for Solimine. The percentages of ethnic minorities are significantly smaller.  Being the selfless man that he is, Solimine has started a fundraising drive to help those who have been affected by the disease. He has produced  teamsnooks.com, a web site that supports those in need of bone marrow transplants. 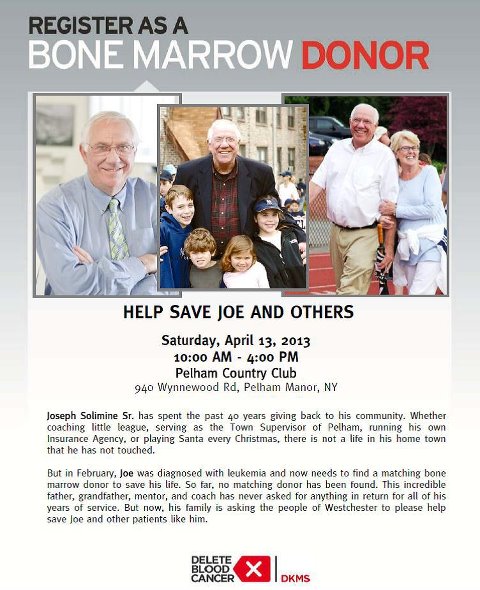 Solimine was a legend long before he arrived in Pelham. Playing high school baseball in the
shadows of Yankee Stadium, he was a lot like Babe Ruth, a big left-handed hitter who could belt
tape-measure shots with a flick of his powerful wrists. He signed a professional contract with
the Pittburgh Pirates at just 17-years old. and reached AAA before retiring at the age of 26.
Solimine brought his love of baseball to Pelham where he was the general manager and coach
of the Pelham Mets. He often suited up in his 50's and still wielded a dangerous bat.

Today, Solimine is stepping up to the plate and digging in against a dangerous disease. Knowing
Solimine as I do, I have little doubt that he will once again hit a home run and beat leukemia,
while helping others.

For more on Solimine and his fundraising efforts, please check out teamsnooks.com.