KEVIN WARE'S INJURY IS A REMINDER OF THOSE WHO'VE BEEN FORGOTTEN 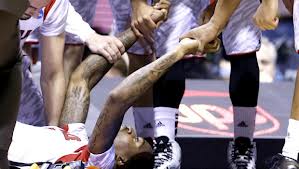 When Kevin Ware of Louisville snapped his leg in two on Sunday, it didn't conjure up memories
for me of Joe Theismann's gruesome injury on "Monday Night Football" back in 1985. I didn't
feel sorry for Rick Pitino when he said he "almost threw up" after seeing the injury. I didn't
really care that teammate Chane Behanan said that he had never seen anything like. 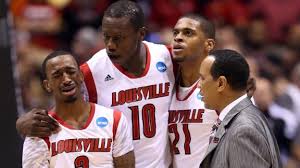 I didn't text or tweet anything to my friends or followers saying, "OMG. Did you see that?" I
am sorry that I didn't feel Ware's pain, or the emotion of his Louisville coach and teammates. I
just couldn't. My thoughts were with the thousands of men of woman of our military who have
come home from wars in Iraq and Afghanistan without their arms and legs and nobody outside
of their immediate family ever really cared. They certainly didn't receive the love and support that Ware will get from people around the nation in the coming days and weeks.

It is sad. It's really, really sad. 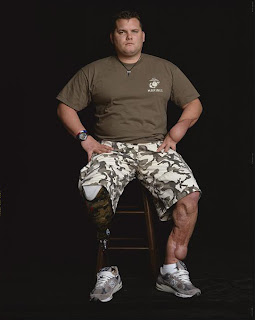 Kevin Ware will not lose his leg and he will be able to walk again. More than 1,500 soldiers
have returned home from fighting wars they weren't really sure why they were really fighting in
the first place, as amputees, their lives changed forever. They will have to adjust to prosthetic
limbs, wheelchairs, countless hours of therapy, and the stares from people who think they are
not really "normal." 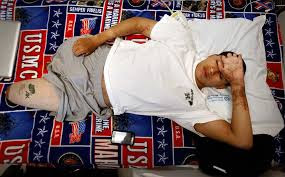 And what about the men they fought with, their teammates so to speak? When Ware went down
with his shin sticking out of his leg a good six inches, his teammates scattered and his coach was
too grossed out to attend to him. It was awful. Now, imagine being on the front lines and seeing
the person next to you have his arms and legs blown off by a roadside bomb. There is no time to
get "freaked" out or even call time-out for an injury. And people wonder about post-traumatic
stress disorder. Yes, it's very real. 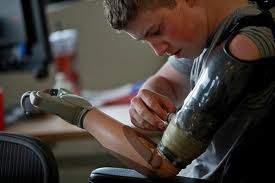 It is sad. It's really, really sad.

During the course of the wars in Afghanistan and Iraq, how many times did you think of the
troops fighting for our freedom and security? Unless you had a friend or relative putting his or
her life on the line, the answer is probably, not much. Many of us went on with our daily lives
and forgot about the sacrifices being made thousands and thousands of miles away. Then these
amputees come home wondering if it was all worth it. If you've read just one of the hundreds
of books written by those who fought in the wars, you know they had doubts about why
they were fighting and questioned if it was all really worth it. 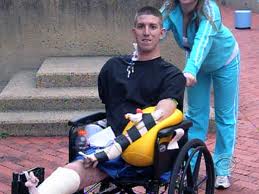 There will a few media members who will be writing today that Kevin Ware put it all on
the line for his teammates and was a true warrior, fighting through the pain to tell his team to
"win the game!" His story will be told over and over, and whether he plays another game or
not, he became a star just because he broke his leg during a nationally televised game. ESPN
will be sure to run a story about his recovery and the impact the injury had on his life, a year
from now.

It is sad. It's really sad. 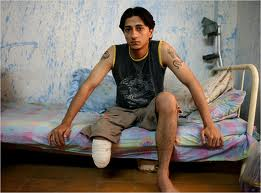 Millions of people saw Ware break his leg, which really, is nothing in comparison to getting
your legs blown off. There are no reverse angle replays of that coming from Iraq or Afghanistan.
There are no first hand accounts of how somebody's life was altered forever. There will be no
tweets or texts about the courage of our soldiers fighting on as they lose blood on the soil.
There will no super-slo replays showing the bravery and character of young kids who have to
deal with living with carbon-fiber prosthetics.

Kevin Ware's injury was frightening and he showed strength when it came to dealing with the
pain. It should serve as a reminder that there are others who are dealing with a lot worse who
need love and support just like Ware.

Don't forget Kevin Ware. And please, don't ever forget those who sacrificed life and limb fighting
for our safety and freedom.