Bryce Harper is old school. The 20-year old phenom runs hard on ground balls back to the
pitcher and sprints around the bases after crushing 450-foot bombs off them. He plays with
the reckless abandon of Ty Cobb and the all-out hustle of Pete Rose. They could've only wished
they were blessed with Harper's kind of power. I love everything about the kid...except his hair.
In the name of Sid Vicious, what the hell is going on there? In less than a year playing in the big leagues, Harper has showed up with more weird hairstyles than Phil Spector in a court room. 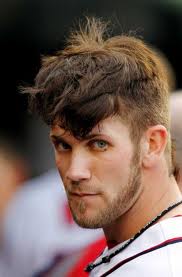 After belting two home runs in his first two at-bats on the opening day, the Nationals star took
off his helmet for a curtain call and I was like, "What the hell is that? Put your helmet back on
now!" I don't know, maybe I'm behind the times, but this doesn't appear very cool to me. I expect
to see that kind of cut on somebody from the back roads of West Virginia or in the re-make of
"Deliverance", but not a major league player of Harper's caliber.

A week ago, Harper tweeted he was looking for a "rockabilly" barber in D.C. Rockabilly? Really? No, I'm not embarrassed to say that  I've never heard of that before, are you? Man, that is one bad cut. You don't think he paid more than $10 for it, do you? 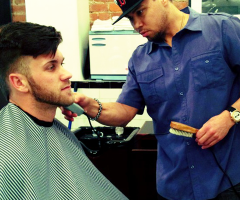 Hey, I realize the kid is just 20-years old and is still trying to find his way, or perhaps, he's just trying
to set a trend and go against the grain (or colics). That's cool. Maybe it's the fact that he's kind of
twisted being a Mormon who was born and raised in Las Vegas. I mean, all these hairstyles would
even turn a lot of heads on the strip, where nearly everything goes, and usually does. 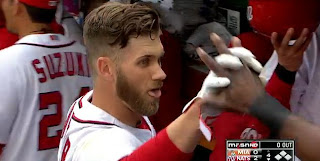 However, in our copycat society, I'm sure every high school baseball player will have this Bryce Harper hairstyle by the end of the week. Remember when Harper graced the pages of "Sports
Illustrated" with his "war paint", which is really just eye-black. It was way over-the-top, but if
you went to a scholastic game soon after that, you probably noticed that 90 percent of the players were wearing their eye-black just like Harper. It was cool to them and they wanted to be just like
Harper. 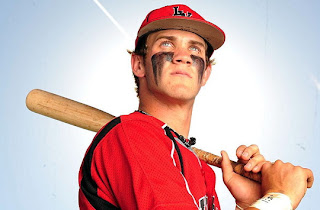 Harper is the hottest thing in the game right now and he is setting the trend for terrible hairstyles.
You can probably expect to see this kind of cut in high schools, around the mall, and plastered
all over Facebook in the coming days. In his brief time in the big leagues, Harper's had the "skullet"
traditional Mohawk, "Layers of  Lettuce", and a few other styles that people have yet to come up
with appropriate names for.
In less than two decades on earth, Harper's had more hairstyles than  I've had in nearly a half-century. It's funny, interesting, and now that's he the best 20-year old player in baseball, worth talking
about. Or maybe not. The way he's going, I'm sure Harper will have plenty of curtain calls
in his career. I just really hope that he keeps his helmet on for the rest of them.