'SURVIVE AND ADVANCE': A LESSON FOR ALL OF US 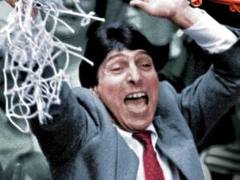 If every college coach whose team is in the NCAA tournament doesn't use ESPN's "Survive
and Advance" as a motivational tool for their players, they should. They most definitely should.
Besides being one of the most well-produced programs in the land of a million stupid reality
shows, the story of North Carolina State's journey to the 1983 national championship was simply incredible.

The documentary was more about life than it was about basketball, though It showed us the
journey to accomplishing a goal or your dream, is far more important than getting the trophy.
It demonstrated that victory doesn't always go to the most talented,  but rather to those who believe
in themselves when others don't. It showed us how a resilient, close-knit group of men, can stare down adversity and triumph when the odds are stacked against them. 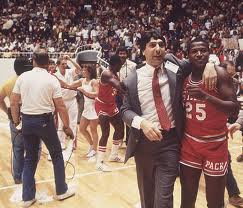 Most importantly, "Survive and Advance" showed us the mind, heartbeat, and soul of Jim Valvano
that only those who played for him had experienced. The leader of the Wolfpack was a brilliant
combination of salesman, showman, strategist, and stand-up comic. When he wasn't inspiring his
team, Valvano was captivating big audiences. He delivered some great lines during the two-hour program including one about the team curfew at the Final Four:

For the first time in 16 years we had a bed check," Valvano said. "and I want everyone to know, all the beds were there." On the eve of the national championship game against Houston, he said, "My
mother took Houston and gave me eight points." 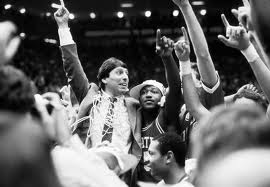 Valvano had the great lines and his team had the great moxie. A season with a lot of potential
seemed to crumble when Dereck Whittenburg went down with a mid-season injury. He returned in
time for the ACC Tournament, which the Wolfpack needed to win just to get into the 'Big Dance'.
They did it by slaying the big dragons, (Michael Jordan-UNC and Ralph Sampson-UVA) on their
way to the title.

That was just the start of Cinderella's wild ride in which they won seven of their last nine games
when trailing with one minute to go. In the first-round of the tournament, they trailed Pepperdine
by six points with a minute left, and miraculously came back. Everything about their run to the
championship was simply amazing. In the regional final, they beat number one seed Virgina and
Ralph Sampson AGAIN. First in the ACC Championship and then to get to the Final Four. 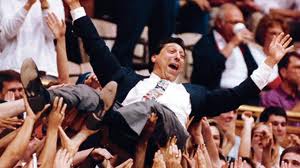 Every step of the way, Valvano had his team believing they could win the national championship.
He instilled this in his players long before the madness even began. The documentary showed a clip
of Valvano explaining how the team actually practiced cutting down the nets prior to the season.
No basketball, no drills, just cutting down the nets! How great is that?! If you can see it and believe
it, you can achieve it.

Valvano was Tony Robbins long before Tony Robbins came along. He could've made a fortune
with self-help books and audio tapes. He was simply the master at getting ordinary people to do
extraordinary things. I'm sure, at times, he even had trouble believing in himself, but he was such
a great salesman, he got his team to believe they could accomplish anything and everything--and
they did.

Nobody in the country believed North Carolina State could beat Houston. Phi Slamma Jamma
was just too good. They had tw future Hall of Famers on their team in Hakeem Olajuwon and
Clyde Drexler. State had nothing but heart and a belief they could beat Goliath. And they did
to win an improbable national championship. When the program was over, I felt empowered and inspired. This was two-hours of phenomenal
television that had an impact not just on me, but a lot of people. The characters in this rags-to-riches
story were all inspiring, but none more than Valvano. He didn't care what people thought or how
they thought of him. He had a dream and he believed it and lived it. The Cinderella story ended,
unfortunately,when Valvano was diagnosed with terminal bone cancer.

But just as he did in rallying his team to the national championship, Valvano believed that he
could beat cancer and would not let him change who he was. But it did. He became even more
of an inspiration. He gave others hope. He made people believe in themselves and encouraged
them to "never give up. Don't ever give up."

And he made people realize that it's not always about winning that counts, but the journey in
trying to get there.
Posted by Paul Devlin at 6:08 AM