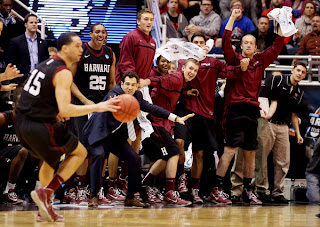 The first day of March Madness had been like a bottle of Coca-Cola that went without its
cap for a weekend: completely flat. There were no dramatic buzzer beaters or real bracket-
busting upsets. Oh, sure, there was Oregon and California, a pair of number 12 seeds knocking
off number five seeds, but that seems to happen every year and has become no big deal.

However, that all changed around midnight, when Cinderella, wearing crimson to the big dance,
announced their presence with authority. Harvard, a school that has produced far more presidents,
doctors, and one big Zuckerberg, than wins in the NCAA tournament, stunned New Mexico, a
three seed, to put some juice into this survive and advance free-for-all.

Harvard, really? Yes, its basketball program gave the NBA an outrageous case of "Linsanity",
as alum Jeremy Lin took the league by storm with two of the greatest weeks the league has ever
seen from an Ivy Leaguer But really, outside of Lin, Harvard basketball has virtually nothing
to show for its existence. I mean, come on. Before last night, they had never won a game in the NCAA tournament and were making just its second appearance in it since 1946. 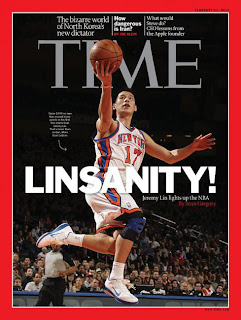 The Crimson weren't even supposed to get a ticket to the ball. Before the season started, Kyle
Casey and Brandy Curry, both senior co-captains, were caught in a cheating scandal. (Yes, they
even cheat at Harvard.) Casey and Curry withdrew from school to try to save their final year
of eligibility. (Yes, finding ways to keep talented players eligible happens at Harvard, too.)

Not many people, the ones who actually cared about Ivy League basketball, gave Harvard a shot
of doing much of anything to earn a spot in the NCAA tournament. And let's face it, outside of
the players. coaches, and family members, nobody around the country cares about Ivy League
basketball. The sports networks don't. Have you ever seen them play on ESPN in the last decade?
Um, maybe once, but I was probably out getting a pedi and mani that day. Forget about the
starting five, if you could name one player on the Harvard basketball team before last night,
you are a true basketball jones. 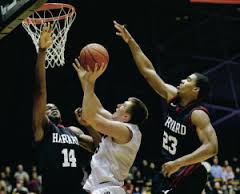 The Ivy League schools play in spruced up high school gyms and are lucky if they get a box
score in USA Today. You get the point. Ivy League basketball, in the landscape of major college
sports, is an after thought, at best. 99 percent of the athletes playing in the NCAA tournament
wouldn't even have a chance to get into Harvard. The academic requirements are off their charts
and no admission officer looks the other way or past an SAT score if it doesn't have four digits.

So, Thursday night, you had Harvard, a number 14 seed, playing New Mexico, a three-seed. It's
safe to say that hardly any of you had the Crimson beating the Steve Alford-coached Lobos. I
mean, be real. That would be a total bracket-buster on the very first day. But it happened. The
game had the feel of "Hoosiers", where a small town team beat  Goliath. Ok, so New Mexico is
not Goliath, but Harvard sure is David. No scholarships, no training table, no state-of-the art
facility. Just bright kids who make their studies, not basketball, a priority. 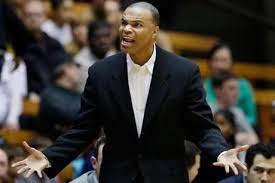 Harvard does have one major thing going for them: Tommy Amaker. The former Duke All-
American point guard has great pedigree and experience. He had a bad one at Michigan as
their head coach, but he has learned from his trials and tribulations in Ann Arbor to take the
Crimson to where they have never gone before. They beat New Mexico for its first NCAA
tournament win EVER. How sweet is that? I left out the score because nobody will remember
it anyway and it's not important. The victory is.

They have claimed first dibs on Cinderella's slipper. Over the next 48 hours, you'll be hearing
more about Harvard basketball than you've ever heard before. Mark Zuckerberg might show
up to see Harvard take on Arizona in the next round. The Winklevoss twins might be there, too.
A lot of famous alums are sure to come out of the woodwork to bask in the glow of their Harvard
ties. 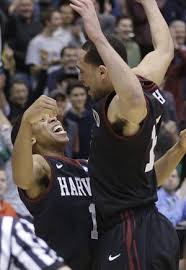 And it'll be refreshing. After all the scandals in college sports over the last two years,
(See Sandusky and Manti' Te'o) this story is a feel-good one. I just hope it gets sweeter and
Harvard makes it to the round of 16.
Posted by Paul Devlin at 6:03 AM