A PICTURE WORTH MORE THAN 1,000 WORDS 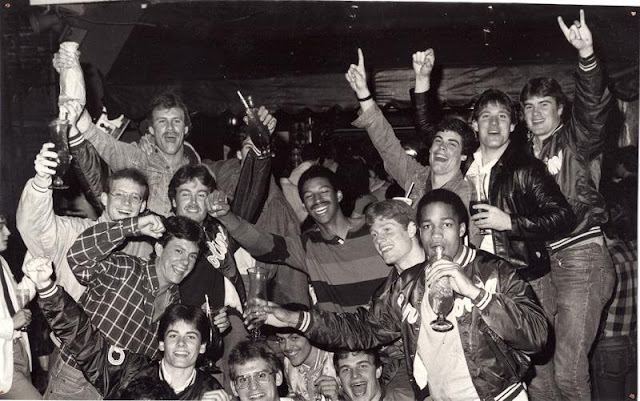 Finding a $20 bill in a pair of jeans you haven't worn in two months is pretty cool, receiving
a picture from a memorable night in New Orleans that happened more than 20 years ago is
flat-out awesome. It's like unwrapping a Christmas gift that you stare at forever in both
astonishment and amazement, the ear-to-ear grin a dead giveaway to others that you had just
gone back to a special time in your life.

Three years ago at the baseball winter meetings in Orlando, I ran into a former teammate from
UNC whom I had not seen in more than 15 years. His once jet-black hair changed so much, he
was barely recognizable. At UNC, he was tagged with the nickname, "Mr. Make Believe", now
he was simply the silver fox to me, his always neatly-coiffed hair, now reduced to a gleaming
white buzz cut.

Doug Torborg was a left-handed pitcher who arrived in the same year I did. We graduated
together and were rivals in the Carolina League. We reminisced about our days at UNC and he
mentioned a picture he had, which I was pretty anxious to see. As we departed, I gave him
my e-mail address so he could send me the picture, which I didn't hold my breath for,
because knowing Torborg as I did, I didn't think there was much of a chance of it ever finding
its way to my message box.

Boy, was I wrong. Very wrong. A few days later, there was a message in my AOL account
with the subject line that read: UNC-New Orleans trip. I quickly opened it up and nearly fell
on the floor with  laughter. The memories came back to me like it was yesterday instead of
1984. The picture was nearly perfect, capturing the unbridled joy of college kids enjoying a
baseball trip to Pat O'Brien's and the French Quarter. Nobody knows who took the picture
and Torborg wasn't sure how it fell into his possession, but it didn't matter. It was classic.
A pure classic.

Let's face it, in our lifetime, we take and appear in thousands and thousands of pictures. But
there are only a few from our college days that we ever keep, much less treasure. After all the
moves I've made from state-to-state, I can honestly say that I only have a handful from my
collegiate days at UNC. The one that Torborg sent me, is one that I'll cherish forever.

I was just a freshman at UNC and this was the very first weekend of the season. We traveled
by air to New Orleans and stayed just a few blocks from the French Quarter. We thought we
were rock stars instead of baseball players,  and tried to fulfill the role to the best of our abilities.

On the night before the season-opener which was scheduled for 7pm on Friday night, our
coach, Mike Roberts, said  we were free to enjoy the night, but set an 11pm curfew. Most of
us made a bee-line for Pat O'Brien's,  which is one of the most popular bars in town.  Nearly
20 members of the Carolina baseball team blew into O'Brien's like the hurricanes they were
famous for.

Drinking age? Is there one in New Orleans? I think you just had to prove you had a pulse at
the door and you were good to go. And we went, and went, and went back for more and more
hurricanes. We didn't know what was in them, nor did we care. We were young and invincible,
plus we had nearly the entire day to recover before our 7pm game. This was good. Life was
good and this picture was proof of that.

It sure was good for Alvin Taylor, pictured in the lower right-hand corner. Taylor was known
as "The Grinch" and he looks like he just got caught not stealing Christmas, but having too
much fun (and a little too much to drink).  He's sucking down one hurricane, while holding
an empty one in his right hand. The look on his face is worth a 1,000 words alone.

I'm not sure Bill Robinson (center of picture, eyes closed) knew exactly where he was, but
you can just tell he was having the time of his life and didn't care if he had to pay the price for
it the next morning.

Scott Johnson, in the black leather jacket in the upper right-hand corner next to me, was a
seasoned pro at this, but he was clearly enjoying the moment. He was known for three things
at Carolina: hitting mammoth home runs, burning the candle at both ends, and chasing women.
And oh, yeah, that black leather jacket, which I'm sure he's wearing today even as winter
turns to spring.

Standing next to Johnson, is Jim Stone, and after four years of being educated at a prep school,
I think this was truly his first night out in a big city and he let it rip. He didn't drink much, if at
all before he arrived at UNC, but that clearly changed on this night in New Orleans. The
expression on his face says, "I'm finally free and I'm loving it."

Nearly everyone in the picture is frozen forever with the look of incredible happiness on their
faces. The smiles are genuine, the bond  we all shared, was very real. We didn't have a care
in the world. We were young, adventurous, and didn't have everything figure out, except how
to break the 11pm curfew, which was shattered well before this picture was taken. The UNC
baseball team didn't close the place down, but everybody knew damn well we were there.

What is better than a team photo without the uniforms? Hurricanes in hand, smiles plastered
across our faces. Man, those were the days, those were most definitely the days of our lives.
UNC takes the French Quarter. Baseball fan or not, you just gotta love it.