SANDY HOOK AND ITS LITTLE ANGELS 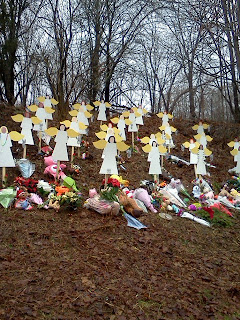 In most cases. pain is temporary. It goes away with treatment, medication, or

just time, which they say,  heals all wounds. But the pain for the people of Newtown
and Sandy Hook will probably stay with them forever. The wounds suffered from
the loss of 20 innocent children and six caring and selfless adults, will never close,
no matter how much time passes.

It was that pain and those wounds that tugged at me this morning, just as it has pulled
at nearly every person around the globe. Newtown seems like a world away to most
people, but for me, it's practically in my backyard, just 25 minutes away from where I
live.

Some of the people, including me, who have traveled to the southwest part of Connecticut,
just wanted to pay tribute to the victims of the unspeakable tragedy in some small way.
We wanted to provide some sort of comfort, albeit just a little, through a gift, words,
or just a hug for the people in this tiny part of New England. But like so many others,
I found the trip to Sandy Hook to be one of the most moving and emotional experiences
I've ever had. 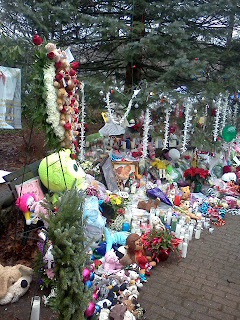 Those who do travel here, are surprised at just how small of a place where this unspeakable
act of violence occurred, really is.

If Newtown is the biggest tree in the area, Sandy Hook, resembles the smallest bud
on its most fragile of branches. It has one stop light, a few tiny churches, and a row
of mom and pop stores. A Subway shop is the only thing that says commercial in
this quaint, little village.

As you travel into Sandy Hook, there are rows of awe-inspiring angels on the
hillside, representing all the people who were killed on December 14. It quite simply
takes one's breath away. 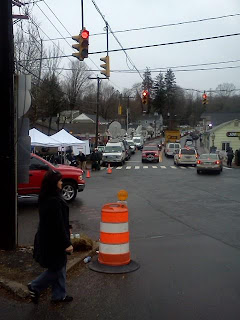 On this dark and gloomy day, which seemed almost fitting for a place that just had
its heart and soul ripped out, two more beautiful little children were laid to rest. This
small village is eerily quiet, the only sounds to be heard on the streets are soft whispers and
sobs from those saying prayers for the victims, and the humming of the satellite trucks
from television stations that are parked along the streets. 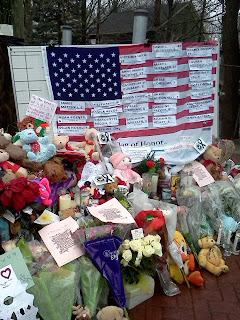 Memorials to the 26 victims of the massacre continue to grow by the hour. There
are Christmas trees, flowers, candles, and countless Teddy Bears that dominate
the surroundings and have become the symbol of this shrine. There are letters 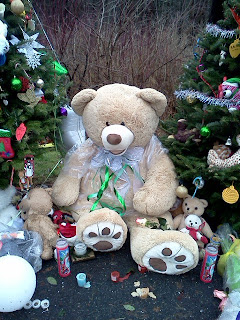 from children at other elementary schools around the country and stockings with
the names of the 20 innocent children who were taking from this world far too
soon, stitched into the top of them. 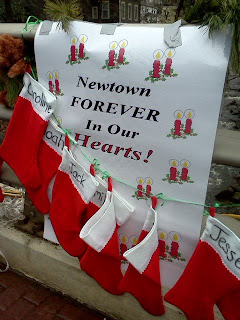 The elementary school where the tragedy occurred, stands just a short distance
away from the memorials. It is off the main street, fronted by the firehouse
where so many parents came to find out the fate of their children, and camouflaged
by tall and thick trees, which makes it seem like one of the safest places on earth.
I found myself asking, "How could this ever happen. How could anything like this
happen here?" 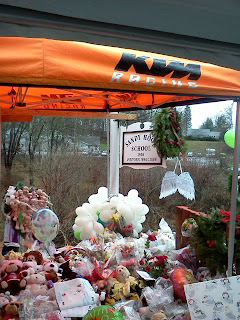 Except that it did. Evil penetrated a small town and even a smaller village.
Newtown and Sandy Hook will never be the same. Ever. There isn't enough time
left for the planet to heal the gaping wound that has devastated the people here.
The whole, "everything happens for a reason," thing doesn't seem to stand in this
case. No big plan or "reason" should ever include the violent deaths of innocent children.
Never.

It truly is sad that, at a time we are about to celebrate the birth of Jesus Christ,
we are mourning the death of 20 beautiful children and loving and giving, adults.
Posted by Paul Devlin at 10:48 AM