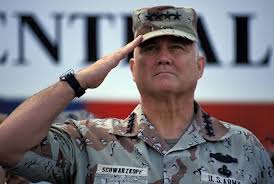 Norman Schwarzkopf was a general straight out of central casting. Big, sturdy,
and intimidating, he was what a leader of the military was supposed to look like.
Even his nickname, "Stormin' Norman" given to him by his aides and subordinates
for his fiery temper and in-your-face style, was perfect.

When he came out for his first press briefing on the Gulf War in 1991, I said to
myself, "With a general like that, this war is going to be over quickly. He was
part John Wayne, part George Patton.  I looked at the guy and said, "This guy means
business. He's going to kick ass and take no prisoners."

Schwarzkopf gave every American the confidence and feeling that Operation Desert
Storm would be well-planned and decisive. It was. The coalition forces drove Iraq
out of Kuwait in just 44 days. 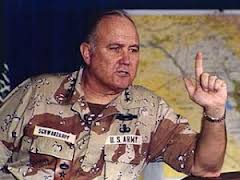 Schwarzkopf was reportedly irate that President Bush ended the mission before
capturing Saddam Hussein and finishing the job. Americans agreed with the general,
and we loved him for it.

Norman Schwarzkopf died of on Thursday due to complications of pneumonia. He
was an American hero and a man who gave a good chunk of his life helping to protect
this country. There was nobody in the history of our military quite like him. He was
a true patriot and a tough, brilliant soldier who was a masterful strategist. 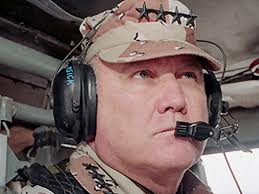 I often felt that Schwarzkopf would've made for a great coach in sports along the
lines of Vince Lombardi, Bear Bryant, and Bobby Knight. He had a temper like
Mike Ditka and the ability to game plan like Bill Belichick. He would've commanded
respect in a sports world that had gone soft and filled with prima donna's and divas
like T.O., Ochocinco, and Randy Moss. Schwarzkopf would've put those guys in
their places quicker than he did the Iraqis.

Scharzkopf would have been a dream for NFL Films with their boom and wireless
microphones. You could imagine how entertaining"Stormin' Norman" would've been
on the sidelines:

"Prime Time, what the hell are you dancing for after making a tackle?"
Cut the crap and play like a man, not like your auditioning for a spot
with Danny Tarrio and the Solid Gold dancers. Good, grief, Deion."

"Hey, T.O., get your candy ass back on the field. If you don't agree
with the program, then get the hell out of here."

"I'm tired of all this 'Manny being Manny' nonsense. We pay the guy
to hit home runs, not to be a freak show in the circus." 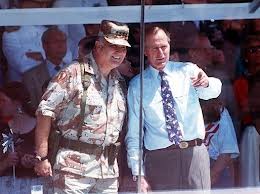 If he was doing an interview with Stephen A. Smith, I could've envisioned the general
interrupting the mile-a-minute mouth of the ESPN criticizer and asking, "Now, what
exactly does the 'A' in Stephen A. Smith stand for? Does it stand for what I think it
stands for?"

Man, it would've been fun to see Schwarzkopf as a head coach. But it sure was
comforting to see him in the role of  commander of our military. He was big, brash,
and bold.  We felt safe and secure with General Norman Schawarzkopf out in front.
He protected  all of us and the entire country.

Thank you, General Schwarzkopf, we are very grateful for your service
to the United States.
Posted by Paul Devlin at 7:21 AM