HAPPY BIRTHDAY, DAD. YOU WERE THE BEST 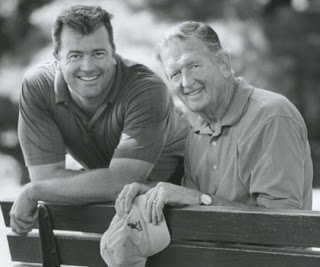 December 2. My dad would've been 83 years old today. Whether it's the celebration
of his birth or the anniversary of his death, it never get easier. He is gone, and as
much as you hope and pray that he will walk through the door again, or be there to
give you some much needed advice, it's never going to happen. It's part of life and
one of the worst things about death.

Today, a lot of the smiles, laughs, and special moments I shared with my dad, came
to life. They seem so vivid, so real, but also so far away. I want to go back in time
and feel the happiness I always experienced when I was with my father. Unfortunately,
none of us can turn back the clock and make things right again.

Things sure felt right this morning when I turned on my computer and saw an e-mail
from a friend whom my father had mentored in the television business many years
ago. The subject line said: THINKING OF PATRICK J. The body of the letter was
very light, containing only a single sentence, but it carried a lot of weight to me:

"He was the best and heaven is lucky to have him."

I'm not embarrassed to say that a silo of tears welled up in my eyes and a lump the
size of Texas settled in my throat. Anyone who has lost a parent knows the feeling.
There is tremendous joy in knowing that others loved your dad, respected him, and
shared many great moments with him just as you did. But there is great sadness that
you can no longer look him in the eye and tell him how much you loved him. 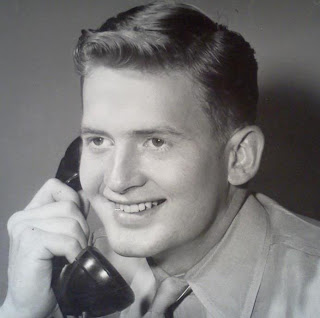 I told everybody how much I loved him when I eulogized Patrick J. Devlin on May
24, 2008. We were best friends who shared an unbelievable bond. I made it through
the eulogy without bursting into tears and I think I did a good job in telling what he
meant to me and our family. But I did have one regret, omitting a story that I think
defined who my father was and the kind of person we lived with every day.

My father died with Alzheimer's disease. Nobody dies from Alzheimer's, they
eventually pass away with the brutal effects that come with the disease. Three weeks
before his death, I stopped home to spend some quality time with him. We were
in the kitchen and he was at the table circling items in the newspaper. I went over
to my dad, put my arm around, and discovered to find that he was checking out
the help wanted ads. 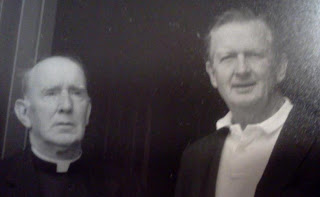 I said, "Dad, why are you looking for a job." He looked at me and said, "I have
to get a job to make sure that mom is taken care of after I'm gone." It was a
terrible time in his battle with Alzheimer's disease and he was thinking not of
himself, but rather, the welfare of my mother. My dad was very successful in his
career and made sure that my mother was taken care of long before this moment,
but he was thinking not of himself, but rather somebody else.

That's who my dad was. He was the most unselfish man I've ever met. He never
asked, "what can you do for me," but rather, "what can I do to make your life
better."

His friend who e-mailed me this morning was right. Heaven is lucky to have him.
He's probably trying to make someone's life better up there right now.

Happy Birthday, Dad. I love you.
Posted by Paul Devlin at 9:40 AM