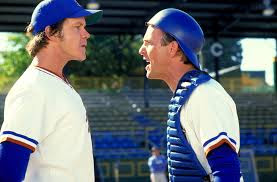 In the fall of 1987, the cast and crew for a low-budget baseball movie began filming at
Durham Athletic Park, an old stadium located in the heart of Tobacco Road. The DAP, as it
was known, had some of the charm of Wrigley Field and Fenway Park, with its short porch
in right field, a warehouse as a backdrop, and seats so close to the action you could almost smell the breath of the fans sitting in them. It was the perfect setting for "Bull Durham", which was made
for just $7 million dollars.

Nobody really knew what this baseball movie was about when production began. The local
paper did a story in advance of its filming and had a quote from a Hollywood producer who
read the script, but who was not affiliated with the movie in any way. He predicted that it would
not only be "the worst baseball movie ever made, but quite possibly the worst movie ever created." 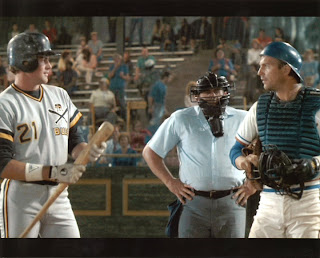 Many could see where that producer was coming from, after all, most sports movies, with
the exception of "Slapshot" and "Caddyshack" had bombed at the box office.  Most directors
found it difficult to make  the action believable with actors who had no athletic ability
whatsoever. In some cases, like "Bang the Drum Slowly," the baseball scenes were
downright laughable.

When I was asked to work on the movie, I honestly didn't care whether it was going to
win an Oscar for Best Picture or go straight to Blockbuster video stores. As a Radio, TV,
and Movie Production major at UNC, I was interested in getting some experience in seeing
how a movie was made. Little did I know that it would end up as an all-time classic and
become part of my life forever.

First of all, filming "Bull Durham" was like 30 days of "Animal House" and "Comedy Central" mixed together. It was a laugh a minute, and in between. there was some work on the actual production of the movie.  The cast that included Kevin Costner, Susan Sarandon, Tim Robbins,
and Robert Wuhl knew how to have a great time while making the movie, and they helped
make it an unforgettable experience. There were long days, lots of drinking, plenty of sex, and
too many laugh-until-you-can't-breath jokes to count. 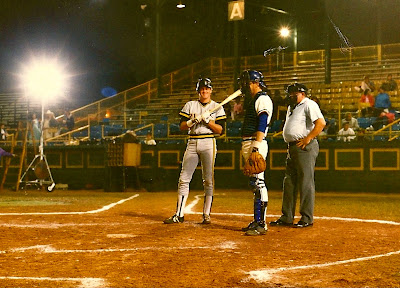 Coming off two wildly successful movies, "No Way Out" and "The Untouchables",
Costner was the perfect guy to play Crash Davis because he could act and play baseball.
Costner was a terrific person during the 30 days of filming in Durham. He picked up every
tab and treated everyone from the grips to Sarandon, the same way and that was with great
respect.. Costner didn't have that big Hollywood ego just yet. I heard a lot  of unflattering things about Costner after "Bull Durham", but he was great to everybody during the filming of
it.

Costner pulled off the best prank of "Bull Durham" when he made an secret arrangement
with a Durham Police officer. Tom Gagliardi, who played the Bulls second basemen, was
bragging one day how he hooked up with a woman who looked like she was 16-years old.

The following day, Costner convinced the police officer to come onto the field during filming
and arrest Gagliardi for statutory rape. The officer broke out his hand-cuffs and told the actor
he had the right to remain silent. Gagliardi freaked out and started running around shouting,
"I didn't do anything, this is a big mistake.The girl said she was 21!". The officer led Gagliardi
away in handcuffs until everyone started cracking up. I must admit it was pretty hilarious. 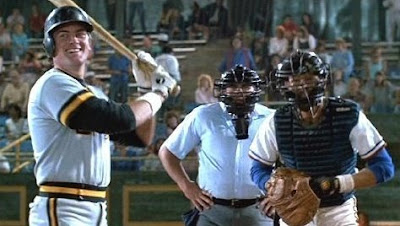 There were scenes that were just as funny as that incident, but ended up on the cutting room
floor. Danny Gans, who played the third baseman  for the Bulls and was later a star in Vegas
as an impressionist, did a national anthem that included Michael Jackson and a moon walk,
Kermit the Frog, Tom Jones, Frank Sinatra, and Sammy Davis, Jr., all performed to a T by
Gans. It was a showstopper and made everyone roar with laughter. Unfortunately, it didn't
make the final cut.

People always ask me how I got to be in "Bull Durham" and the home run scene with Costner.
I'd like to say I was walking down the street and the director discovered me, kind of like the
episode of the "Brady Bunch", where a Hollywood-type director wanted them to be the subject
of a series. I was in the right place and the right time. That's it, that's all.

I  played baseball at UNC and was just finishing up my course work to get my degree.
Someone called UNC and gave them my name. I showed up and did what I always did, I just
played ball.

The first scene I was in, called for me to hit a double as a right-handed hitter. Tim Robbins,
who played "Nuke LaLoosh" actually had to throw it to me because the camera was behind
him  filming the scene. He was the  worst athlete any actor could possibly be. The guy was all
over the place.  Crash Davis was right when he said Nuke couldn't hit water if he fell out of
a boat. Before the scene, Ron Shelton, who wrote and directed the movie, told me to try to
hit a line-drive between shortstop and third base. I said to myself, "If I could do that, I'd probably
be playing in the big leagues." 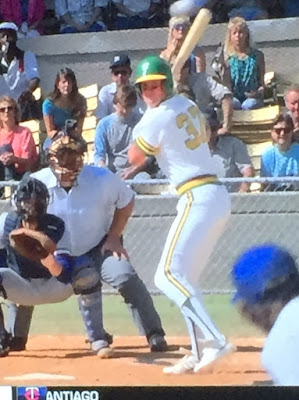 What made that even harder was the fact that Robbins couldn't throw the ball over the plate, or
within a mile of it. He was throwing it behind me, over my head, five feet in front of the plate,
and he hit me twice in the back. It took 17 takes to get the scene right. When I finally hit one,
I was so stunned that I didn't even move. Costner got up and yelled at me, "Run!". In the
movie, the radio man back in Durham hits a piece of wood and says, "there's a line drive to
left-center field."

I was catching when Costner had his first at-bat for the Durham Bulls, but we traded places
later in the movie. Costner was behind the plate when I got up in the 9th inning, while Nuke
was working on a shut out. During this scene, which was filmed with the cameras directly
in front of Costner and a minor-league pitcher replaced Robbins (Nuke) on the mound. I had
to a curveball even though the most ardent baseball observer couldn't tell the difference
between the fastball and curveball when it appears on screen for 1/100th of  second.

Shelton told me to hit the ball and then "give it your best Reggie Jackson in watching the
ball go out."  That meant I should act like the ball had been hit so far "it should've had a damn stewardess on it."  I must admit, I didn't have a lot of experience in that since I only
hit four home runs in my career at UNC.

After Nuke kept shaking Crash Davis (Costner) off, he stood up and said, "Charlie, here
comes the deuce. When you speak of me, speak well." I just gave some cheesy smile and
got back into the box. I wished they had let me say, "thanks" or something because if I had a
line, I'd still be getting paid today.

I cranked the ball out on the fourth take and did like Shelton asked me to and gave it my
best Reggie Jackson-pose. They said cut, that's a wrap, and I was gone. I didn't hold my
breath for any of the scenes that I was in to make the final cut. I was superstitious, so I
really didn't say anything to anyone. I chalked the whole thing up to one great experience.

A month later, in December,  the Boston Red Sox organization called and offered me a
free-agent contract. Six months later, on June 13th, 1988, I just happened to be back at the
same park playing against the real-life Durham Bulls. And it just happened to be "Bull Durham Night". I was like, what were the chances of all this happening. We were scheduled to see the premiere of the movie the next day.

In the eighth-inning of our game against the Bulls, I came up to bat with the bases loaded. Two months into my minor-league career, I had yet to hit a home run. And since I had only been
hitting left-handed for two years, I had never hit a home run from that side of the plate. I hit a
ball which I thought was going to be a routine fly ball to right field. Somehow, someway, the
ball carried and cleared the fence by about a half-an-inch. It must've been divine intervention
or something because I hit the ball in the same spot as I did in the movie. It was all so surreal.

I hit two more home runs against the Bulls in that same park later that year. I often said, jokingly,
that  I hit .420 in that park and .091 everywhere else. There was something really magical for me
when I played at Durham Athletic Park. 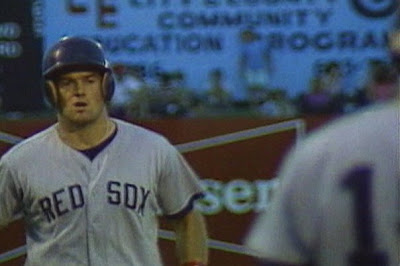 In the off-season that year, I received a big package from UPS. It was from Kevin Costner.
He had purchased a letterman-type jacket for everyone who worked on "Bull Durham", which
was over 200 people. On the back of the jacket read, "Bull Durham-The Greatest Show on Dirt". Production crew 1987. It was a great gesture by Costner. 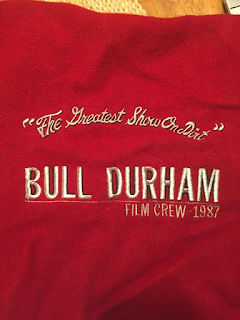 I never really thought much of my home run scene in "Bull Durham" because I just hit a ball,
which didn't take any great talent or ability. I thought of the movie as a great experience and
that was about it. But 30--plus ears later, it continues to follow me around. People call, email, or text me every time they see my home run on the countless number of times "Bull Durham" is
re-run onvarious networks.

Friends introduce me to acquaintances as the "guy who hit a home run in "Bull Durham'. Or
they start with, "Hey, do you remember the guy in Bull Durham...?" I honestly get embarrassed
about it. It was a long, long time ago.

But man, it was one helluva an experience.
Posted by Paul Devlin at 7:06 PM