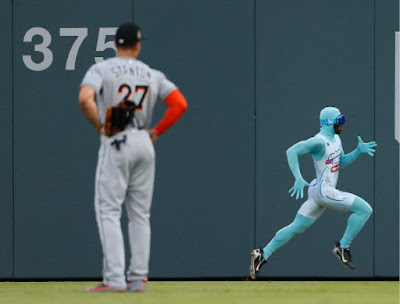 Forget about being like Mike,  I want to be The Freeze. Yeah, you know the superhero in
Atlanta who has managed to juice up major league baseball without taking a single PED.

This guy, dressed in a sleek aqua spandex suit complete with goggles that makes him look like
an Ooompa Loompa all stretched out, is the best promotion in sports since the chicken was hatched
in San Diego during the late 70's.

As he bursts from foul line-to-foul line like he's shot out of a cannon at Sun Trust Park, the
new home of the Atlanta Braves, I thought for sure Terrell Owens had finally found his true
calling and was in a place where he was truly happy. But it wasn't T.O.

This guy runs so fast and so effortlessly, I was almost certain the Braved hired a former
professional athlete to pull off a promotion that has captivated not only fans, but the players
as well. Just who the heck was this guy? Chad Ochocinco? Randy Moss? Perhaps, it was
Atlanta resident and Olympic champion Edwin Moses running some sprints to keep in shape
Or just maybe Falcons star receiver Julio Jones is just getting in some work before he has to
report to training camp. 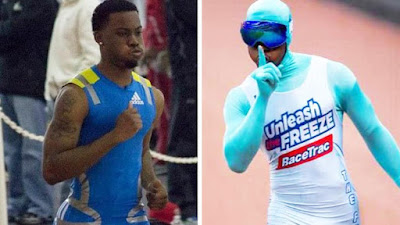 Well, in this Facebook, Twitter, iPhone world we live in, there's no secret than can ever be
kept and the Braves were pretty forthcoming in revealing the identity of The Freeze. It's
a guy named Nigel Talton, a 26-year-old security guard and member of the Braves' grounds
crew.

According to news outlets with more credibility than CNN, which is a Bubba Watson drive
from Sun Trust Park, Talton was a sprinter, (no kidding) at Iowa Wesleyan and Shorter University. He ran a sub-10.5 second 100-meters, which is smokin'.

The Braves hired Talton to help promote frozen drinks at RaceTrac gas stations (It's a southern
thing)  He would be called The Freeze. And fans would try to Beat The Freeze--and they'd
get about a 200-foot head start. 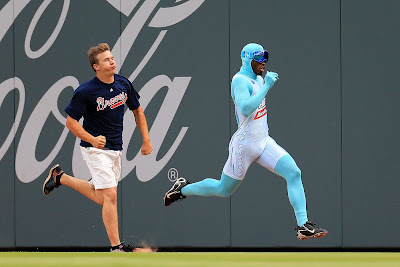 The Freeze has lost a few times---that I know of. But this little promotion has sparked ny
interest in sports. Well, honestly, I don't care about scores and highlights anymore and baseball
on television absolutely bores me. The only thing I really care about in the sports world today
is whether or not The Freeze wins his race. I anxiously await to see highlights of The Freeze
splashed across the Internet.  I wish he raced every night instead of the 81 times when the
Braves play at home. Man, I hope he doesn't pull a hammy or show up on the police blotter
anytime soon. That would be a total bummer.

The Freeze is so awesome. I want to be him for a day...or an hour....or for just those 25 seconds
it takes him to run from foul line-to-foul line. I was a plodder, a Clydesdale, a true slow poke.
To be able to run like the Freeze would be so cool. 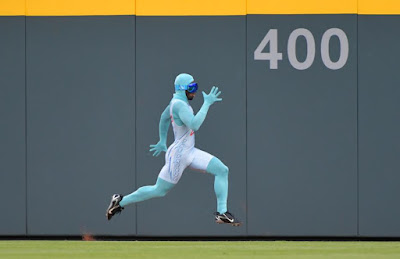 The Freeze has become way cooler than the original Dos Equis ever was. Stay fast, my
friend.