STEVE TONRA AND HIS LOVE FOR THE GAME

Steve Tonra was a wonderful baseball player gifted with sprinter's speed and a little thunder
in his bat. During his high school days in New Canaan, Ct. he liked to boast that he was "the
straw that stirred the drink." He was catalyst as the lead-off man and a fleet-footed centerfielder,
but for all his talent, it was his charisma that separated the "T-man" from everybody else,
which also made him a person everyone gravitated to.

Tonra was half Kelly Leak of the "Bad News Bears and half "Super Joe" Charboneau of the
Cleveland Indians: cock-sure, carefree, and a little crazy, but in a good way. He never opened
beer bottles with his eye-lids as Super Joe once did, but Tonra could always spin a story or
find trouble like nobody's business.

I vividly remember the time Tonra and I were invited to a try-out with the Los Angeles Dodgers organization and he showed up with a 1960's gray, baggy, New Canaan uniform, a Cam motor
oil baseball hat, and sneakers that looked as if they had just  been plucked from a Salvation
Army bin. If only I had a picture of the look on the faces of all the scouts when they saw Tonra
take the field. Priceless.

That was the T-Man.

But behind the legend of the "T-Man", as he's still affectionately known by all his friends,
is a man who has an insane love for the game of baseball and the Boston Red Sox. Born and
raised on the mean streets of Brockton, Mass,. Tonra is a Red Sox fan through and through.
I know he's got Red Sox posters lining the wall of his home in Roswell, Georgia, and wouldn't
be surprised if one of Ted Williams adorns it, as well. During his playing days, Tonra wore
number 9, "mythical number 9" as he used to say, in honor of the Splendid Splinter.

I've often been awakened late at night by the buzzing of my cellphone. Booty calls have been
replaced by "Tonra's Take". I get updates, theories, and analysis from the T-man on all things
Red Sox:

"The Sox starting pitchers have an ERA of 1.93 after eating pizza's on Monday's". Ok, so that's
an exaggeration, but I'm not that far off when it comes to Tonra's obsession with the Red Sox.
I could go without him blowing up my cellphone almost every night, but I can appreciate his
love for the game and the Red Sox.

I have little doubt that if Tonra followed his heart out of college and caught a break, he'd
be a highly-successful general manager in major league baseball today. Once featured in
the New York Times for his mastery of the board game, Strat-O-matic, Tonra's extremely
bright and has a tremendous baseball I.Q. He could run circles around and build better
baseball teams than 75 percent of the GM's in the game today.

Baseball's in Tonra's blood. It drives him, energizes him, and motivates him. Today, he is an
umpire in one of the hot-beds of baseball. He has already umpired more than 300 games this
season, and as he was when he was playing, T-man is really gifted as a man dressed in blue. 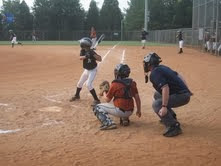 I have to admit, though, when I tell people that Tonra is umpiring, the first words out of the
their mouths usually begin with the letters. N....F....W. And with two exclamation points. Ya
see, when Tonra was playing  in New Canaan, he didn't really have all that much respect
for authority and when he was on the baseball field, no pitch was a strike unless he actually
swung at it.

Now, the "T" is an umpire calling balls and strikes and kicking people out of games for
arguing and disagreeing with him. Imagine that.

Tonight, T-man will be watching the Red Sox try to win the World Series for the third time
in a decade. As any true Red Sox fan, he is guarding against the worst, after all, he has felt
what Bucky "Effin" Dent has done to heart, his Red Sox soul was torched by Bill Buckner's
blunder, and his mind was scrambled by Aaron Boone's bomb in the ALCS.

But with many things with T-Man, he usually is the one who comes out on top, and I'm sure
he'll be waking up his neighborhood outside of Atlanta tonight with screams of joy, while
blowing up my cellphone.