PAM OLIVER IS TOUGH AS NAILS 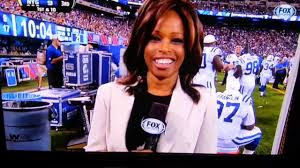 Pam Oliver must've been a hockey player. She's that tough.

During Sunday's telecast of the Indianapolis Colts-New York Giants, Oliver, a longtime
sideline reporter at Fox Sports, was doing what she does better than most. She was preparing
for her gig when Chandler Harnish, a back-up quarterback whom you will never hear of
again after this piece, air-mailed his receiver during pre-game and drilled Oliver right in
the face. Hard. It was a fastball, as baseball analyst, Dennis Eckersley likes to say, " that
had some hair on it."

Oliver barely blinked. Oh, yeah, her hair got messed up a bit, but she took it like Rocky did
in just about every one of his movies. A thunderbolt by Apollo Creed? No problem. A hammer
from Clubber Lang? Is that all you got? A haymaker from Ivan Drago? Yooooo, Adrian!

Oliver hung tough and was ready for her report with a smile on her face and just a little more
hairspray on her dome. No ice, no EMS, no call for sympathy from the guys back in the studio.
Oliver is a pro's pro. A true gamer. She went down and went down hard, but Oliver got off the
canvas, well, um, turf and kept on going like nothing ever happened.

It reminded me of the days when we worked together at Fox Sports Net in Atlanta. She
often acted like nothing happened when the world around her was falling apart. And many
days in that studio, things fell apart early and often. Fox hired a production team that was
basically out of college. No experience. Shows would come up eight minutes short,
which in television is an eternity, and many times, the anchors would be left hanging without
shot sheets or correct scores. But Oliver carried on. 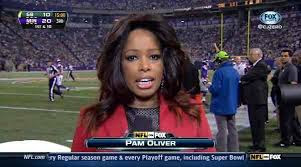 Watching Oliver get drilled by an errant pass, reminded me of  when we were working
together on the nightly sports program. I had gone to the refrigerator to get a grapefruit,
because, of course, I was on the grapefruit diet. I was walking back to the office from the
break room when a large slice of grapefruit got caught in my throat. My face was turning
blue, my eyes were watering, and even the best interpreter from the United Nations couldn't
figure out what the hell I was saying.

I walked into the office and my co-anchor sat in a chair to the left and Oliver was on
the far right. Matt Morrison immediately popped up and gave me the Heimlich maneuver.
That piece of grapefruit came out of my throat like it was shot out of a cannon. That sucker
whizzed past the head of Oliver and hit the back wall of her desk. Yep, it was something
out of sit-com, but really happened.

Oliver turned, gave me a dirty look, and just carried on as if nothing happened. That is
Pam Oliver. A pro's pro who was always channels her inner hockey player. She's that tough.
Posted by Paul Devlin at 12:12 PM