JASON YOST: DAREDEVIL WITH A CHAINSAW

The morning after Nik Wallenda walked a tightrope across the Grand Canyon before a
world-wide television audience, Jason Yost performed his daredevil act in front of an audience
of three, including me. who accepted his offer of working on his crew for a couple of days.
What I  witnessed over the next eight hours left me in awe of his talent and vocation, which in layman's terms, is a tree surgeon.

On a sizzling, 90-degree morning in North Stamford, CT., Yost, who was a drummer in my
brother's band during their days at New Canaan High School, had the mission of trying to bring
down a 100-foot tree that was sandwiched between two multi-million dollar homes. With all
the extreme weather in the area over the last two years, the client was worried the tree would
fall on her neighbors home, causing major damage, and with it, a potential lawsuit. 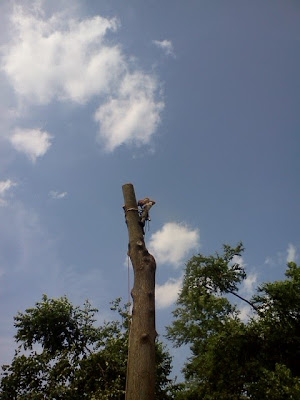 Yost, who is 5 feet and a smidge, and not more than 125 pounds when soaking wet, has been
an arborist for more than 25 years. He is old school, learning the business by trial and error,
and works with equipment that has long been outdated. Think flip-phone versus iPhone.
Imagine the wooden racket of Bjorn Borg against the graphite bazooka employed by Rafeal
Nadal. There is nothing fancy about his operation like hydraulic machines his competition uses
that hoist a surgeon up to his destination in a safe and comfortable bucket.

Nope, Yost scales the tree himself  with a heavy belt strapped around his waist with enough
clips, ropes, and chains to sink a small ship. With a tree that seemed to touch the clouds, standing
not more than five yards from the neighbors yard and a meticulous garden larger than most
people's backyards in his clients, there was absolutely no margin for error. I know what you're
wondering: how the heck do you bring down a tree that size and in that spot without causing
mayhem? The answer is simple: piece by piece and branch by branch. 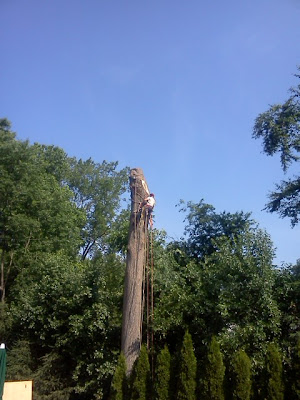 Yost was like spiderman and a lumberjack rolled into the one. The athleticism and precision
he showed while baking the blistering sun, was simply incredible. The job might be best
described as a controlled demolition or dismantling. Yost would rope a large 'segment' of a
tree then have a worker hoist up a chainsaw on a rope. He'd unfasten it and then slice part of
the tree, and,  because it had been roped already, Yost would control its descent so it wouldn't
go crashing into the neighbor's yard or the client garden. He'd then turn off the chainsaw and
fasten it to his belt.

This process went on for the next four hours straight. No breaks or relief. Rope, chainsaw,
release, and repeat. It may seem boring but it was truly fascinating. Like the speed of the
athletes can't truly be appreciated by watching on television, one can't fully comprehend the athleticism, focus, and dexterity of Yost until seeing him do his thing in person. As someone
who has competed in sports, covered them, and appreciates great athletes, I can say that Yost
was electric when doing his job. 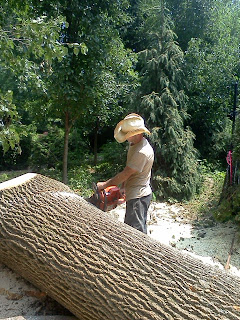 He'd take a break for lunch, remove 25 pounds of  gear, then relax for a little while before
suiting back up and scaling the tree once again. It's kind of like doing a marathon, having a
break to re-group, then going out to run another one. The work of Yost was that tough and
demanding.

Yost single-handedly took down a tree that measured almost 100 feet in two, eight hour
days that were so hot, you were dripping in sweat after blinking twice. I'm not in awe of
many things these days, but I marveled at the work of Yost. It was simply incredible.

If  it had been broadcast to the world, many people would've found it a lot more compelling
and demanding than Wallenda's walk across the Grand Canyon.