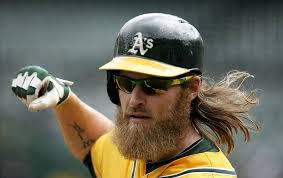 I haven't kept up with the Oakland A's this season and when I saw this long-haired, long-bearded
guy circle the bases the other night, I wondered if general manager Billy Beane had signed one
the ZZ Top guys to a contract in the off-season. Upon a Google search, I discovered it was
outfielder Josh Reddick, who was once a clean-shaven member of the Boston Red Sox.

It seems like beards are in this season in baseball. Not neatly trimmed beards, but those that
haven't seen a clipper, scissor, or razor since Christmas. They are like Chia Pets on steroids, out
of control, but still kind of cool. Perhaps, baseball players are tying to channel their inner NHL players, who follow tradition by never shaving during the playoffs.

Maybe they are just hiding behind their own type of mask, one that allows to play the role of a
character other than themselves. When I see Nats outfielder Jayson Werth, I think Ted Kacynski.
Can you blame me? 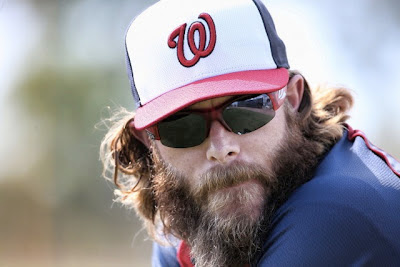 ﻿
During the 1970', A's owner Charlie O. Finley paid all of his players to grow mustaches.
Rolle Fingers, Catfish Hunter, Reggie Jackson, Sal Bando, and the rest of the swingin' A's
all sporting them. The mustaches set the A's apart from every other team in baseball. There
isn't an owner in today's game that would pay any of his players to grow full beards, but it
would kind of be cool, wouldn't it?

The Red Sox might be the closest team to pulling it off with Dustin Pedroia, Mike Napoli,
and Johnny Gomes leading the way. Gomes is one of those guys who have more hair of on their
face than they do on their head. Classic 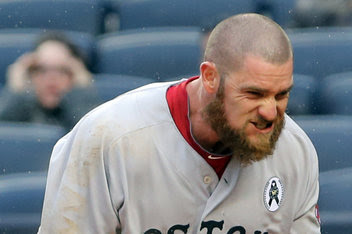 Former San Francisco Giants pitcher Brian Wilson had the greatest beard in the history of
baseball until injuries forced him from the game. The all-star closer was known simply as
"The Beard". It kept growing and growing, taking on a life of its own, so to speak. If you're
a hitter, how the heck can you concentrate when see all kinds of weird things flying out of
that beard? 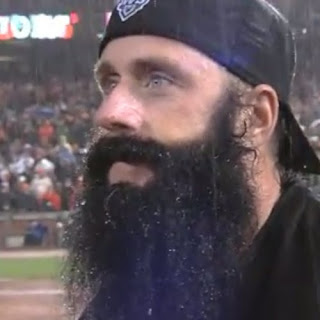 But as they say, "Beard today, gone tomorrow." It seems like since Wilson has been gone
from the game, the aforementioned players are battling to take the title of best beard in baseball.
Heck, even Wilson's former teammate Sergio Romo has grown one that rivals that of Wilson. 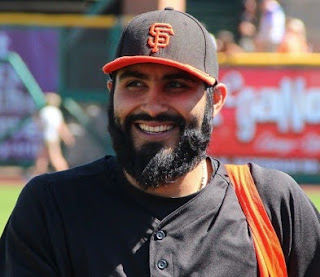 One thing is certain, on 95 degree days, those fury beards can't be all that comfortable. But
as far as style goes, they are pretty cool.