THE LEGEND OF BO HICKEY 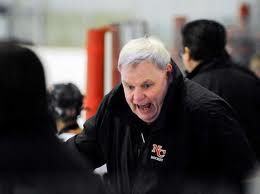 Bo Hickey. The name alone sounds like something out of Hollywood. To those who saw Hickey
run over, through, and around tacklers during his days as a running back, he is bigger than life.
And to Lou Marinelli, who coached with Hickey for more than 30 years and saw him jam a pack
of Red Man tobacco in his mouth every day, he is like a "cartoon character."

Thomas "Bo" Hickey is an original. When he was born, the mold was thrown away. He is a
true legend in the state of Connecticut. If you tell people with a sports background that you're
from New Canaan, the first thing they'll most likely ask is, "Do you know Bo Hickey?" My
answer is yes, and it always brings a huge smile to my face.

The man, the stories, and the legend of Bo Hickey are truly classic.

As a high school athlete, Hickey was the original "Bo", an athlete who could do everything. In
the 1960's, while playing at Stamford Catholic High School, Hickey was a 6 foot, 230 lb running
back with sprinters speed. He was well ahead of his time and became one of the greatest high
school players in the history of state. He took his talents to College Park, Maryland to play for
the Terps where he became a star before leaving to play in the CFL after his sophomore year. 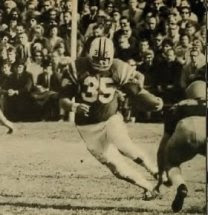 Hickey ended up playing one season in the NFL with the Denver Broncos, scoring four
touchdowns. before injuries ended his career. His playing days over, Hickey set out to be a
coach, where his legend grew even bigger.

After a few coaching stints around the FCIAC in Connecticut, Hickey joined Marinelli's staff
in 1981, where he stayed for 31 years. He helped morph the Rams from league doormat to
perennial state power as an assistant coach. I was part of Marinelli and Hickey's first team at
New Canaan High School and the stories I have about Bo are simply priceless. 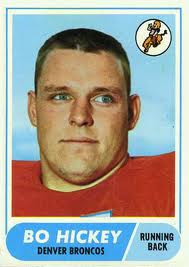 For the coddled and pampered kids of New Canaan, Hickey was the first in-your-face, tell it
like it is, football coach. As a former professional player, Hickey wasn't easily impressed. When
he yelled and scream with a wad of tobacco in his mouth, even the best interpreter from the
United Nations couldn't figure out what the hell he was saying.

Coach "Bo" acted like he knew everything, and that's because he usually did. When Marinelli
asked Hickey if he wanted to join him at coaching seminars, Hickey would respond, "I played
the game for a living. What can I learn at a seminar?" Hickey played under the legendary coach
Bob Lynch in high school, who was an offensive wizard and Hickey had an amazing sports I.Q.
He was rough, tough, and never afraid to tell you what he thought, which most of the time, was
right. 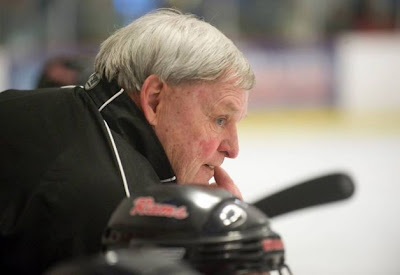 During my senior year, we had a player, the late Fred Trumpler, who worshipped Hickey at the
alter, but was a bit of hypochondriac. He was always stopping the flow of practice with some
malady. Frustrated by Trumpler's actions, Hickey picked up four orange cones from the sidelines
and placed them around Trumpler, who was laying on the ground writhing in pain, and said,
"All right, we're good. Don't run into the Trumpler zone and things we'll be OK." And then
he'd spit tobacco juice defiantly into the ground.

Hickey was known as much for his tobacco chewing as his coaching ability. We often thought
he went to sleep with a pack of Red Man under his pillow. During my senior year, I took a
marketing class and we were assigned to create a product and make a commercial for it.
Me and my good friend, Steve Tonra, had Hickey in mind for the project. We came up with
"Bo Hickey's Everlasting Chew" and our marketing campaign for it was a pure classic. He
was on a horse with a bigger than 10-gallow cowboy hat, spitting tobacco juice at everybody
he had just beaten up at the saloon. 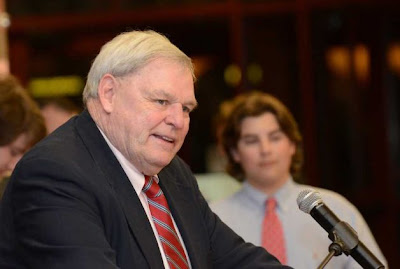 I could do nothing but laugh nearly 30 years later, when Hickey, who runs the cemetery in
New Canaan, was helping me pick out a plot for my father who had just passed away. I opened
the door to his SUV and four cartons of Red Man tobacco fell to the ground. Yep, that's
Bo Hickey, through and through.

Bo Hickey portrays himself as a tough guy, and he is. But under that sandpaper-like exterior
is a man with a huge heart. He won't let many see it, but he truly cares deeply about his players
who all respect him tremendously. Hickey has been coaching hockey at the high school for more
than a decade and doesn't get paid much. Marinelli once told me that Hickey spends far more
out of his own pocket on the kids and the program, than he takes in. Hickey helps out with food, equipment, and anything a kid on his team might need. And he does it without asking for anything but an all-out effort in return.

Bo Hickey is a true classic and a one-in-a-million type of guy. He has coached in Connecticut
for nearly 40 years and has made an impression on everyone he has met. Is he always politically
correct? Um, no. and Bo doesn't care. Does everyone like Bo Hickey? Absolutely not. But those
are the people  that don't really know Bo Hickey. They see what's on the surface, which isn't
always pretty. 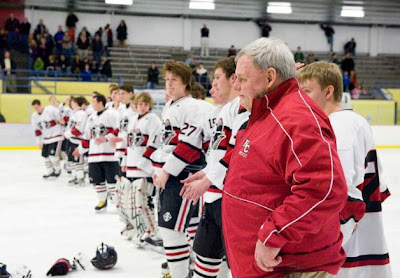 But to the players, coaches, and administrators who truly know Bo Hickey, he is a great man
and  a legend. I love the guy.

On Friday night, the football program will honor Bo Hickey for his contributions and service.
And yes, there will be a roast of Bo Hickey, as well. Should make for one hell
of a night.
Posted by Paul Devlin at 6:27 AM