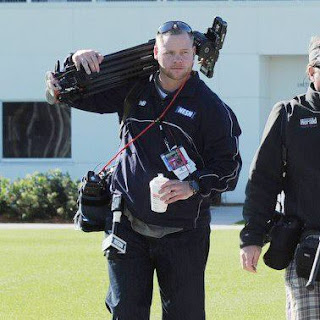 Patrick Gamere is to videography what Steven Jobs was to technology: pure genius. When
he puts a camera on his shoulder,  he creates magic like Ozzie Smith often did with his glove.
Gamere has the eye of a trained Navy SEAL sniper and, like Larry Bird,,  often sees things
develop before they actually happen.

Gamere is a longtime videography working for American's best regional network, NESN. He
has been on a spectacular run in the city of champions, covering the likes of Bruins, Celtics,
Red Sox and Patriots. A former basketball standout at Framingham State,  Gamere has an
uncanny knack of being in the right place at the right time, and is often photographed by
others doing it. 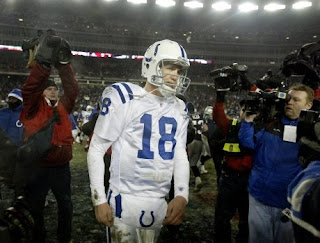 On Tuesday night at Fenway Park, Gamere was assigned to cover the Red Sox game against
Tampa Bay, which ended with a walk-off home run by Johnny Gomes. There was 'G', as he's
known by his fans throughout the region, following Gomes as he touched down at home plate. 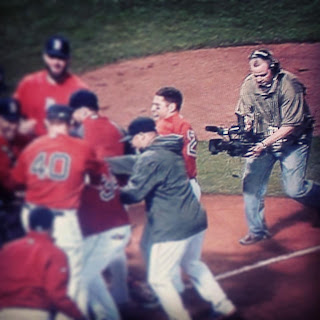 The photograph illustrates what Gamere is all about: passion, focus, talent, and commitment.
Gamere makes something that's really difficult, look easy. Holding a 20-lb camera free-handed
in the middle of a scrum can be a challenge, but Gamere is a total pro. He got the money shot
for NESN.

Gamere certainly knows how to get the money shot. He uses his vast knowledge of sports
and has a sixth sense when it comes to knowing what scene in the locker room or on the field
will make for a memorable image. When the Celtics won the NBA title in 2008, there was
Gamere in the post-game celebration, camera perched up high, standing behind Kevin Garnett
who was celebrating his first championship. Priceless. 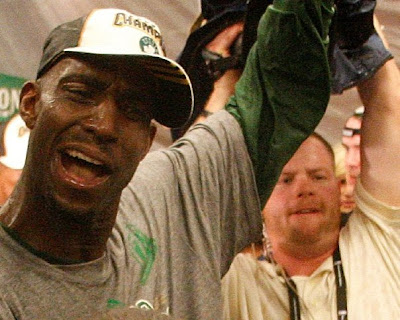 As a videographer for NESN and working in the sports tradition-rich city of  Boston, everyday
is like Christmas for Gamere. If he's not covering the Patriots on a run to the Super Bowl, he's
with the Celtics or the Bruins or the Red Sox. It's a dream job, but few do it better than Gamere.
He was recently awarded an Emmy for his videography brilliance. He is a valued employee at
NESN, one with a tremendous work ethic, dependability, and commitment. Gamere takes his
job seriously, but has fun doing it. Who wouldn't working at NESN and covering the best teams
in sports? 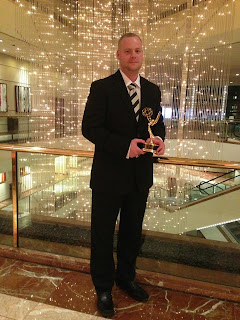 Gamere reminds me of the former Chicago Cubs great, Ryne Sandberg. He's pretty quiet, stays
on an even keel, loved by his teammates, and delivers an MVP performance nearly every
night, but never says, "look at me, look at what I did, aren't I great?' 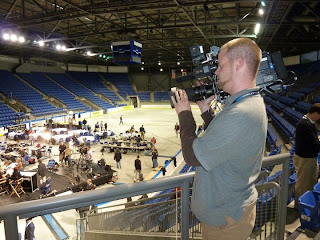 Gamere works on a great team of photographers along with the wily veteran John Phillip Martin,
Byran Brenan, and Chris Del Dotto. They all love what they do, and do what they love. It's
a great group of guys, who are having the times of their lives.

He may not show it, but Gamere has the biggest smile of them all as he goes to work. He
is living his dream and knows that on any given night, he could get the shot that everybody
in New England will remember forever. And he often does.