OSCAR PISTORIUS: IT'S NOT ABOUT THE BLADES 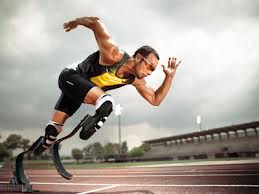 It's not about the carbon blades, nor is it about trying to win a medal in the
Olympics. For Oscar Pistorius, a double-amputee, his performance in London
is all about showing the world and those who are disabled, that heart, courage,
and perseverance can overcome the most daunting obstacles. He laughed in the
face of a life filled with adversity to become a true international hero.

Oh, Pistorious wasn't fast enough to advance to the finals of the 400-meter dash, but
when he crossed the finish line, there wasn't a gold medal big enough to put around
his neck to signify what he has accomplished. He not only made history, becoming the
first double-amputee to compete in the Olympics, but Pistorius gave hope to all those
people who've had to be unfairly labeled as "disabled" or "handicapped" just because
of the way they came out of the womb or if misfortune showed up on their doorstep
and changed their lives forever. 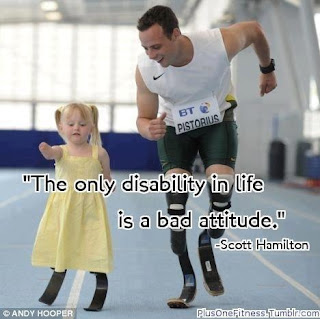 He is the Jackie Robinson of disabled athletes, a man who broke a barrier that many
felt would never be broken. A double-amputee in an Olympics without the word, "special"
in front of it? No way. Way. Other disabled athletes may never qualify for the Olympic
games, but they can sure as hell will try and you can bet millions will.

I've heard some people argue that the high-tech, carbon-fiber blades give Pistorius
and unfair advantage over able bodied athletes? Really? And what kind of advantage did
Marion Jones have when she was pumping her body with "the cream" and "the clear"
and whatever else the mad steroid scientist, Victor Conte, was concocting in his
BALCO lab. There is a list that's a mile long of track & field athletes who've been
busted for performance enhancing drugs and people are worried about carbon fiber
blades? Give me a break. 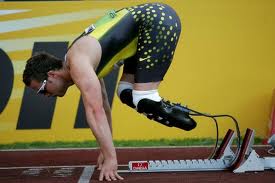 The critics say that Pistorius has never had to deal with cramps, strains, sprains,
stress fractures, or bone breaks? Are you kidding me? Name an Olympic athlete who's
had to contend with having no legs.

The critics want to say the carbon-fiber blades make Pistorious go faster. First of all,
there's no way an athlete would be able to compete in the games if the International
Olympic Committee thought anybody had an unfair advantage. Plus, Pistorius makes
the carbon-fiber blades move, not the other way around. He generates the power, the
blades don't, sorry.

Try being disadvantaged from the age of 11 months when doctors had to remove the
lower legs of Pistorius was born without fibula's. Try being stared at your entire life
because you have stumps for legs. 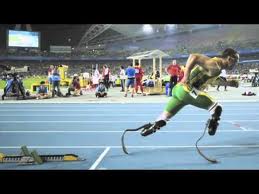 Pistorius made the London Olympic games truly special. He beat "able-bodied" athletes
and proved to everyone there are no limits. Michael Phelps has the most medals and
Gabby Douglas a soon-to-be hearty bank account, but it's Pistorius who will accomplish
the most during these Olympic games. He pushed the limits and showed everybody that
impossible is truly nothing.