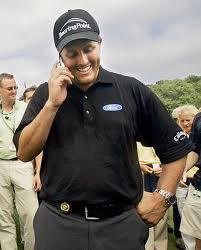 By most accounts, Phil Mickelson is a good guy. He's pleasant with the media,
doesn't drop-kick his club after bad shots, and he signs autographs for many of the
fans who come to watch his play. But last week, the man known as Lefty turned
as soft as his physique. After shooting a 79 in the first round of The Memorial
Tournament, he pulled a "No mas", and withdrew from the event, citing "mental fatigue."

Mickelson's had it pretty good in his life, never having to work a real job. He's won $67
million in his career and has another $150 million in the bank from endorsements. Lefty
only plays in 20 events a year and usually flies to them on his private jet. I'm not sure
the mother who has to work two jobs to support five kids can fully appreciate Mickelson's
"mental fatigue."

However, there was another reason for Mickelson's sudden departure: cell phones. A lot
of cell phones and a lot of picture taking with them. PGA Tour policy actually does permit
cell phones at tournaments, they'd just rather not have people taking people's like they are
free-lance photographers for TMZ. Mickelson usually has big crowds that follow him during
tournaments and apparently a lot of people were snapping off photos and sending their lame,
out of focus, looking-like they were shot from the blimp pictures to Facebook. (Isn't that
what everybody does these days? At least a bad picture of Phil is better than the silly ones
of food that seem to be everywhere on the newsfeed.) 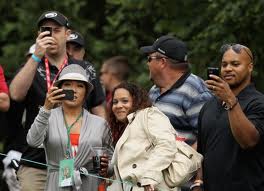 Mickelson was distracted by the sounds that come form the cell phones and it really affected
his game. Even Bubba Watson felt sorry for Phil saying, "It's sad when cell phones can make
or break a championship. Bubba, are you kidding me? You're going to blame a bad score on
a cell phone? It's utterly ridiculous that a golf course has to be as quiet as an empty church.
You have to walk around on egg shells or you may incur the wrath of Mickelson or even Tiger
Woods. Tiger's former caddie used to rip cameras out of the patrons hands and chuck them
in the lake even they distracted his gravy train. Quit, quiet, quiet, please!

Let's see, baseball players have to stand in the box against a guy throw 98-miles an hour with
filthy breaking pitches while fans are hurling insults at them and cranking up vuvazelas.
But golfers who have to put a ball in a target that never moves have to have total silence? 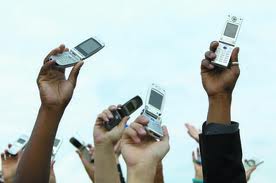 18-year old kids can step to the line in the NCAA championship for a crucial free-throw
and 5,000 morons behind the basket are screaming "noonan" and "you suck", but golfers
demand to play in an environment that's as quiet as a morgue?

NFL kickers have to try to nail a game-winning field goal with two seconds on the clock
with the entire stadium going nutso, but silver spoon-fed golfers can't make a three-foot putt
unless God turns down the volume down to nothing?

That's almost as ridiculous as Mickelson taking out his cell phone on the 6th fairway to call
PGA Tour Commissioner Tim Finchem to complain about the fans using their cell phones on
the golf course. That's beyond hilarious. It's like Tim Tebow doing a commercial telling people
to quit smoking and then as soon as the director says, "cut, that's a wrap," he lights up a
cigarette and goes on his merry way. OK, so that's little extreme, but you get my point. 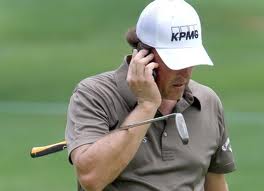 This display by Mickelson is beyond ridiculous. It Tiger had complained like this, he would
have been booed for being a big crybaby. Mickelson won't feel that type of wrath because
he's a likable guy, for the most part. But come on, these golfers are getting bent out of shape
because of cell phones? LOL.

I respect golfers and the game, but seriously, it's time to man up and get some thick skin.
These mobile devices are the way of the world and there not going away. Commissioner
Finchem said they are here to stay for fan who go to events. If they take away cell phones,
the suits know that the fans will stay away as well.

Lefty, you are all wrong on this one.
Posted by Paul Devlin at 10:37 AM