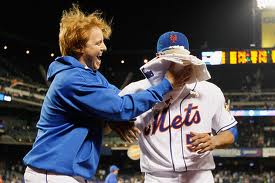 AJ Burnett's most significant contribution during his time with the New York Yankees was
pie facing teammates during their "hero" post-game interviews on the field. He'd take a towel,
dispense a load of shaving/whipped cream on it, then sneak up on a teammate and wash his
face in it. Another great example of adolescent jockularity. It was funny at first, but like
everything else in this copycat world, the novelty of it wore off because every team in baseball
started to do it after every friggin' game. I might watch "The Departed" or "Shawshank
Redemption" over and over but having to witness millionaire ballplayers run around like
Little Leaguers (on steriods) is enough to make me go, "click". On Friday night, I wanted to
throw my clicker at the television screen because another idiotic, juvenile act of a player. 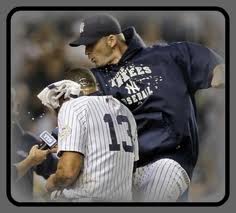 I had just watched the last three innings of Johan Santana's no-hitter, which made for great
theatre. Despite employing the likes of Tom Seaver, Nolan Ryan, Jerry Koosman, and Dwight
Gooden, the New York Mets had never produced a no-hitter in more than 50 years and 8,000
games in their franchises history. Some dude named Dallas Braden of the Oakland A's can
throw a perfect game, but nobody in the pitching rich history of the Mets can author a no-hitter?
Unbelievable.

Santana was coming off major arm surgery and the Mets had him on a pitch count of between
110-115 pitches. He surpassed that number in the 7th inning and you could just about see
the cheeks of Mets manager Terry Collins pucker up with every pitch. He was entrusted by
the front office and the ownership group, who is paying Santana $20 million a year, to abide
by that pitch count. Collins was getting so tight, he'd have trouble squeezing a greased wire
through any orifice in his body. But do you think he wanted the entire world hating on him
for the rest of his life for taking Santana in the 8th inning of a no-hitter? Forget that. 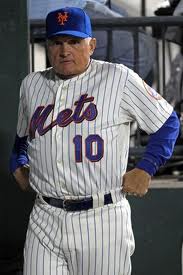 Collins let Santana go for his moment and place in Mets history. If his arm blows out in two
weeks, oh, well, at least it'd be worth it if Santana completed the no-hitter. The left-hander
did just that when he struck out Cards third basemen David Freese with a disappearing 3-2
change-up. When you saw Santana shake off catcher Josh Thole just after he started his
wind-up, everybody pretty much knew what pitch was coming, but Freese could do nothing
but flail at it. And there it was, a no-hitter, the first in franchise history, and it was done
in front of the long-suffering Mets fans. It was a beautiful moment. 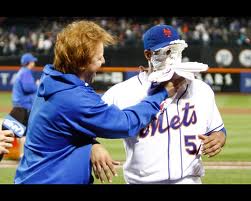 That moment got screwed up by Justin Turner, the Mets utility infielder with fire-engine
red hair, who obviously doesn't have a flair for the dramatic. He's the kind of guy who could
walk into the Playboy mansion and screw up a party with just him and 100 naked playmates.
The Human Buzz Kill. In the middle of Santana's on-field post-game interview, Turner
decides its time for a face full of whipped cream. Ugh, what an idiot. This was a no-hitter
and Johan Santana, not Anibel Sanchez. The man is a future Hall of Famer, not a journeyman
pitcher like Phil Humber. 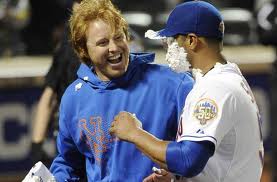 Through the Redi-Whip facial, you could sense that Santana wasn't thrilled, but in the
big moment, he played along. Turner should be on the first bus to St. Paul, Minnesota
to play in the independent league. His post-game theatrics were strictly bush league.
That wasn't the time for it, and really, it's time to end these ridiculous post-game pie
face things. They are old, boring, and no longer funny.
Posted by Paul Devlin at 6:31 AM