When I was growing up in the late 1970's, the Dallas Cowboys were truly
America's Team. Everything about them seemed to be really cool. The
uniforms, the star on the helmets, even that giant opening in the roof of
Texas Stadium was unique. Tom Landry created the "Flex-Defense"
and the offensive lineman used to do that up-and-down shift before the
ball was snapped. I wasn't a fan of the Cowboys, but they did seem,
in many ways, to be bigger than life, especially for a 12-year old kid.

Before cable came along the Cowboys seemed to be on national television
every week. For some reason, it felt like they were always playing the Steelers,
Redskins, or Giants. I'd tune in every Sunday at 4pm EST, to hear
the legendary voice of Pat Summerall call the games. He was joined by
his long-time sidekick, Tom Brookshier. Both of them seemed to have
about three gin and tonics before kick-off. 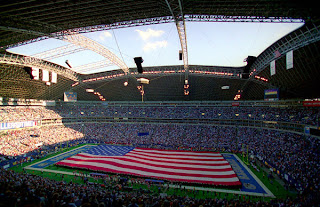 If Bob Sheppard had the voice of God, then Summerall possessed
the pipes of Moses. There was no better play-by-play man in the country
than Summerall, and that voice helped make for great theatre.
And when he was calling Cowboys games in the late 70's, there wasn't
a team that had a better collection of names than America's Team. That
voice and those names, made every Sunday seem like the Super Bowl.

It seemed like their names were created by a Hollywood producer,
who's job was to come up with unique, memorable names. Heck,
even the Cowboys General Manager had a great name. Is there
a better name for the architect of the Cowboys than Tex Schramm? Then there was Golden Richards, a speedy-receiver with long-flowing
blonde hair, who always seemed to be on the other end of a brilliant
pass from Roger "the dodger" Staubach. The offensive unit also had
Billy Joe Dupree, Robert Newhouse, Preston Pearson, Tony Dorsett,
Rayfield Wright, Butch Johnson, and Tom Rafferty. "Bullet" Bob
Hayes and Lance Alworth came before Richards and Pearson, but they
had the great names to go along with the talent that earned them a spot in
the Cowboys Ring-of-Honor, which was also cool and unique to every team
in the NFL. 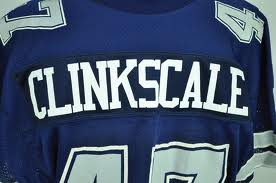 The best of the best names on the Cowboys came on the defensive
unit. How bout Dexter Clinkscale? Ed "Too Tall" Jones, Randy "the
Manster" White, Everson Walls, Harvey Martin, Jethro Pugh. Jethro?
There hasn't been a great Jethro before or since Mr. Pugh. Lee Roy
Jordan, Bob Lilly, Bob Breunig. Love it.

The Cowboys have had some great names since, like Nate Newton,
and DeMarcus Ware, but there has never been a collection of great
names like there were on  America's Team of the late 1970's.

If you have any great names you'd like to mention, go for it.
Posted by Paul Devlin at 1:52 PM