FROM FAT TO FIT: GORILLA STYLE

August 3, 2011. 39 days until The Toughman Half-Ironman triathlon.
Fat man triathlon would be more up my alley. The application for the
event required that I mark down my weight. Anything over 210 lbs is
called a Clydesdale. Over 240 should be categorized as a Hippo. I'm
over 240.

I've stepped up my training program. It's called "Gorilla Fitness", which
means going as far as you can, for as long as you can, for as fast as you can.
Now, anybody who saw me run during my illustrious baseball career,
can tell you I never got anywhere quickly. My speed was somewhere
between a tortoise and a tortoise's grand ma-ma.  But I have great endurance.
However, I'm still 25 pounds overweight, which has forced me to train
incognito. The embarrassment of a double-chin flopping from side-to-side
as I ran was simply too much to bear. 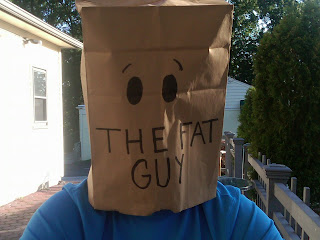 The bag over the head works, and I actually look a little younger, if
not thinner. The brown bag has a good slimming effect. I didn't think I
was getting hefty. Perhaps,somebody traded out the mirrors in my bathrooms
for the ones at the carnival  that make overweight people look skinny.

My goal is to get down to 225  and just finish this half-ironman triathlon
on September 11th. I've been  gradually increasing the mileage during
my daily, or in reality, weekly runs. The course near the Hudson River in
Croton is expected to be hilly, so I've been doing a lot of hills with  plyometrics
and calisthenics mixed in. This will help me during transitions and burn more fat cells. 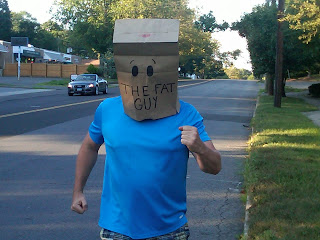 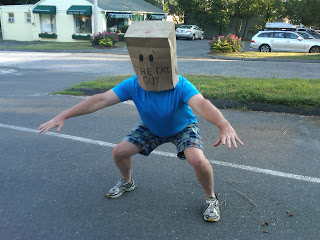 This past Saturday, I seriously miscalculated my "Gorilla Fitness" program
and it cost me two days of much-needed training. It was around 4:30pm
when I got home from work. I needed to bike, but in all honesty, I just
wanted to scarf down about three Klondike bars and lay on the couch
and watch television until it was time to eat again.

Instead, I motivated myself to go on a long ride. I left at 5:00pm and felt
there were about 3 1/2 hours of riding time left in the day. My  first mistake
was not packing a lot of food, or any food to be honest with. On a ride
that long, I'd burn a  billion calories and need to replenish the  electrolytes
and all those other things Dr. Oz says we need  to function properly.
Without proper nutrition, I malfunctioned.

Long story short, I was dehydrated after my 46-mile ride. During the
last eight miles of my journey, when it was dark and I was out of water,
I thought of James Franco's character in "127 hours". He was that hiker
who got his arm caught between a rock and a hard place and eventually
he had to cut it  off.

He also drank his own urine. I certainly wasn't going to do that, but I
was motivated to finish my ride without passing out or hallucinating﻿. I
made it home through the cover of darkness. But I was cooked from the
sun, exhausted from the ride, and ridiculously hungry because I didn't
have anything to eat during the entire trip. Not exactly brilliant. 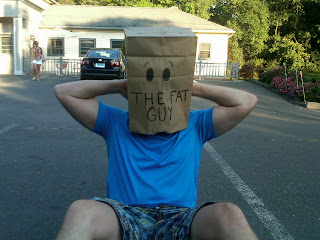 Sapped of my energy, malnourished, and dehydrated, I couldn't move
for two days. It felt like somebody had drilled a vacuum into my back and
sucked out my kidneys. I jumped, or at least I thought I jumped out my
bed the following morning,  convinced that I had  lost 10 lbs from the
ride and dehydration. Christ, I got on the scale and I had gained a pound.

What is up with that? Two  things I'm starting to understand. One, it's a
lot harder to drop weight at  47 than it is at 37. Two, I cannot recover
like I used to. Where is Brian McNamee and Miquel Tejada when you need
them? I think I need a few shots of B-12.

Next week I have just one goal in mind: get under 240lbs. Damn, I read that
and realize, that's a lot of weight.
Posted by Paul Devlin at 9:58 PM