FAT MAN COMETH: LESS THAN A MONTH TIL RACE DAY.

My long, lonely jogs have turned into battles between me and my knees.
Those days of catching in bullpens along Tobacco road and in the
Carolina League finally caught up with me. When my feet hit the pavement
with the grace of a Water Buffalo, it feels like 100 daggers are piercing
what's left of the cartilage around my patella. 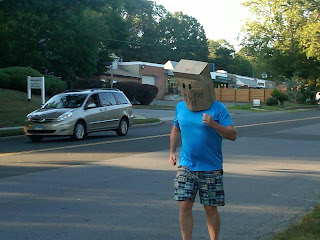 As I cringe, my knees look up at me and scream, "Hey, lard ass.
When you were eating all those Krispy Kreme donuts, did you have to
eat the entire box?!" But I endure, even though my knees are whining and
running is my least favorite activity in life. My pace is somewhere between
Fred Sanford and Re-Run (hey, hey, hey!).

I'm pretty much resigned to the fact, that on September 11th, the
tournament organizers of the triathlon are going to "Motel 6" me. They
are definitely going to keep a light on for me as I try to complete a
13.1 mile run, which comes after a 56-mile bike ride, which comes
after a 1.2 mile swim. 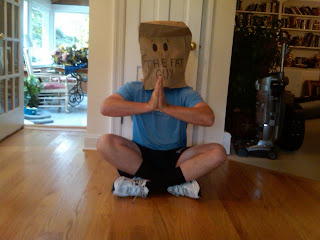 I signed up for this brutal test of endurance because my weight had
gotten out of control. I needed a goal and something to help push
me away from the dinner table and toward a weight that didn't begin
with a 2 and a 5.

Through my Gorilla Fitness program and  strict diet, (wink,wink)
I've slimmed down to 238 lbs. I still find it hard to believe that I weighed
in at 208 just three years ago. Losing 30 more pounds seems as realistic
as Reuben Stoddard becoming a Chippendale.

There have been a couple of days where I had the "screw its", times
where I ignored my good conscious that was telling me to work out.
I even cheated on my diet once, ok, maybe twice. I helped a friend
move from her mansion in New Canaan to a regular-sized home
in Old Greenwich. I helped unpack the thousands of boxes littered
across her homestead. After I  worked non-stop for almost 8 hours,
I crashed on the couch and woke up famished at 3am. I definitely
could eat a cow.

I went to the refrigerator and really wasn't expecting much because,
after all, nobody has a stocked fridge when they just move in. I opened
the freezer and there it was, in all her glory. A box of "Skinny Cow" ice
cream cones. It was like finding two, $20 dollar bills in the pocket of
a pair of pants you haven't worn in awhile. My face must have looked
like Indiana Jones' after discovering the Holy Grail. I hit the jackpot.
A Skinny Cow for a hungry fat guy. As that beer commercial once
stated, "it doesn't get much better than this." 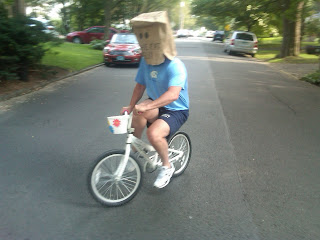 Guilt ridden and in need of a work out, I went for a 60-mile bike
ride the following day. It was only 85 degrees but the humidity was
close to 90 percent. I was sweating like Phil Mickelson on the final
day of a major. (No man-boob jokes, please)  Unlike my last
long-distance ride, I brought a lot of energy-boosters, including
fruit and GU, those mini-packets filled with some type of gel that taste
like Elmer's glue and chalk.

With four miles to go in my journey, I stopped off at a pizza place
to get a drink. God, that slice of pepperoni sure was enticing.
Hmmm. Discipline or instant gratification? I said yes to the latter
and ordered up what seemed like half the pie. I justified it by
saying that I had already burned about 5,000 calories and remembered
somebody had told me the metabolism rate keeps churning after
a long ride like that. And I basically said because I had endured
so much pain during the ride, I deserved to have some pleasure.

While sitting on a bench outside the pizzeria, a little man resembling
Larry David of "Curb Your Enthusiasm" got out of his large Mercedes
and walked by me with a quizzical look. He said, "Are you going
to eat that whole thing." Ever the wise-ass, I refrained from firing
off a suitable comeback. After all, I was in the midst of eating one
of the best slices of pizza's I had ever tasted.

26 days to race day. Am I ready? Not right now. But while time
is winding down, so is my weight, and that's a really good thing.
Posted by Paul Devlin at 2:33 PM