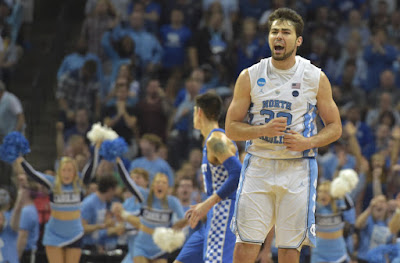 Just over a year ago, I ran into Mark Maye, one of my old roommates at UNC during a
football game. We hadn't seen each other since I left Chapel Hill after graduating in 1987, but
we had reconnected recently, thanks to one of our other roommates, Brett Rudolph, who was a standout linebacker on the football team.

Coming out of high school in 1983, Maye was North Carolina royalty. He was the top-rated
quarterback in the country after a spectacular career at Charlotte's Independence High School.
Maye was a 6'5" pro-style quarterback who threw lightning bolts. He was Peyton Manning before Peyton Manning.

After getting the full-court press by every coach in the country, Maye told everyone to keep
the full-ride they were offering. He was going to UNC on the prestigious Morehead Scholarship,
the highest-academic award given by the university. 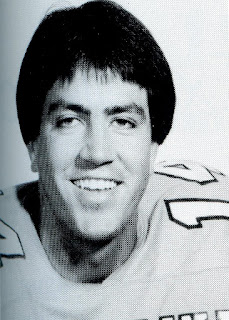 Maye was also one of the nicest guys on the planet, void of ego, full of manners, and very
genuine If you didn't know better, you'd have thought he was the last walk-on allowed to dress
on Saturdays instead of a quarterback who was the object of every college coaches desire.

On a spectacular football Saturday in 2015 at Kenan Stadium, the same place Mark
called signals for the Tar Heels, we connected in person for the first time in more than three
decades. I had talked to him on the phone, trying to prank him by saying I was a fundraiser
for North Carolina and asked him if he could donate $50,000.  The conversation went on for
about five minutes before he figured out he'd been had. 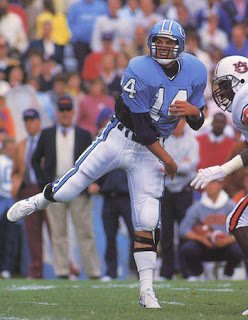 We made small talk and I asked about his kids. Someone in the Carolina network told me
he had a son who was a pretty good basketball player in Charlotte. Mark was about as perfect
as a guy could get, but he did have a slight stutter going all the way back to his Carolina days.
He said, "Paul, he, he, he, he's a pretty good player. He, he, he got some scholarship offers but
he wanted to walk-on at Carolina."

6'8" white kids have as much of a chance of walking-on at Carolina as Donald Trump does. It
just doesn't happen very often, and if it does, they will get limited seconds of playing time
and a start on senior day. That's about it.

Mark and I shook hands, wished each other luck, and went our separate ways. A blast from the
past vaporized into the Carolina blue sky.

I am not a Carolina die-hard fan these days. I don't wave the pom-poms or get emotionally
involved in games anymore. Well, that was before Sunday's game against Kentucky. This was
for the chance to go to the Final Four. I missed the entire first half as I was traveling from out of town.  Basketball games don't really get going until the last 12 minutes, so I wasn't too upset
about joining the game in progress. 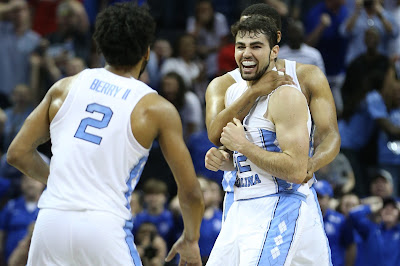 As the game went into crunch time, a player named Luke Maye stepped up for Carolina. Yes,
this was the son of my old roommate. Damn, I was feeling old. Like his father, Luke is tall,
very tall. He stands 6'8".  He is a spitting image of the old man: dark hair, sleepy eyes, great
posture.

Mark's career at Carolina never lived  up to the huge expectations thrust upon him. He had
rotator cuff surgery as a sophomore and was never quite  the same. One of the most sought
after players in the country out of high school, he blended in with so many other football
players in college.

Sunday, I was watching his clone, a player who fits in perfectly to the system of Roy Williams.
He is a smart player and one who hustles his ass off. When Luke went to the foul line, I saw
his father, Mark, talking to me at the dinner table in our old apartment. When Luke dove for
a loose ball near the end of the game, I imagined Mark giving his son a big fist pump from the
stands and then recoiling, hoping no one saw his emotion. And when Luke hit the shot that beat Kentucky and sent UNC to the Final Four, a huge huge smile washed over my face. 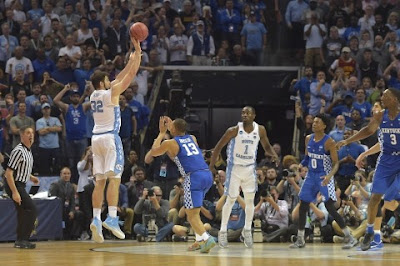 How great was that? A walk-on, playing on the same floor with a slew of NBA lottery picks,
hitting a game-winning shot to send the school he grew up rooting for, to the Final Four.

Luke Maye, an unheralded player unlike his father, etches his name in the annals of Carolina basketball. Everyone who ever went to UNC and even those in North Carolina who didn't, will  remember that shot forever.

I will remember that shot forever, not because my school is still alive and has a chance to
win the national championship. I will remember it because my old roommate, Mark Maye, who
battled through injury and unfulfilled expectations at North Carolina, enjoyed his greatest
moment as part of the Tar Heels family.

Any top-rated recruit in the country who gets injured and has to live with unfulfilled
expectations, may always wonder, "what if?" It can eat at a person for a long, long time.

Mark Maye waited a long time to experience a moment like Sunday. His son, Luke, a walk-on,
nailing a basketball that is now part of Carolina history. How sweet is that?

That was so awesome. That's what makes sports so great.