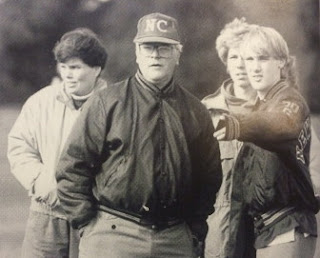 Those were the first words I scanned over as I picked up my schedule for the first
day of classes at New Canaan High School in 1979. I was one of the "new kids" to
arrive on-campus that fall. I loved change, challenges, meeting  new people, and
experienced all of them after our family moved into town from Lake Forest, Illinois
earlier that summer.

Mr. Mosley was the first teacher I met at New Canaan High School. He seemed to be
a New Englander through and through. A bit stand off-ish, weary of outsiders, and a
confidence that bordered on arrogance. That was my take as a self-assured sophomore,
an "outsider" trying to find his way in a new town and new high school.

His classroom was meticulous just as he was, and there was no mistaking as to who
was in charge of it. Mosley commanded respect and always got it. As a person who
served the country at 18-years-old, fighting in the Korean War, there was no way Mosley
would've stood for today's dress code and obsession with cell phones, Twitter, and Facebook.

He was the type of guy who would've held out a cardboard box as his students entered
the  classroom, demanding they place their cell phones in it until class was over. Mosley
was a no nonsense guy and when it came to teaching, he was all business. 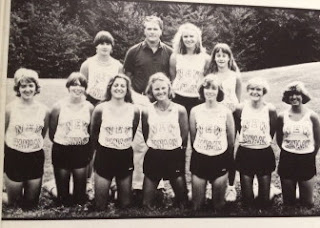 Mr. Mosley and I hit it off from day one. He was also a referee in football, not surprising,
given his attention to detail and rules. Mosley did everything by the book. As the
quarterback on JV football team, Mosley and I would trade stories about my games
and the ones he officiated over the weekends.

Mosley was much more than a teacher and football referee. He was a legendary coach,
overseeing the track and field teams for more than 30 years. He guided the Rams to nine
FCIAC titles and four state championships. Mosley took his rightful place in the NCHS
hall of fame in 2012.

With his build and military background, he seemed more suited for blowing his whistle
and barking out orders to football players than cross-country runners, but that is where
he made his name and became a New Canaan legend. There is a spot in Waveny Park
where track and field meets are still held today. It's called "Mosley's Hill", a tough
stretch of land that challenges runners and demands their respect---just like Mosley.

Mosley was a tough man, but very fair. And behind a tough exterior was a man with
a giant heart. He cared for his students, his athletes, his school,  his family, and loved
our country. Oh, some people say all the right things about the good 'ole U.S. of A, but
Mosley fought for it and took great pride in it. 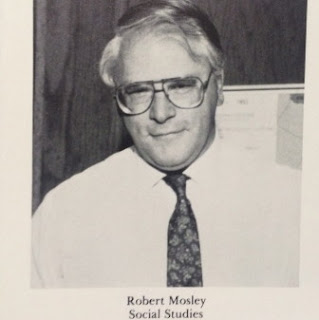 Bob Mosley was genuine. He was real. And he was a great American.

On Sunday, July 10, Mosley died peacefully in Danbury. He was 81-years old.
Everybody who met Bob Mosley didn't always love Bob Mosley, but they sure as
hell respected him.

He was a great man and he will be missed.