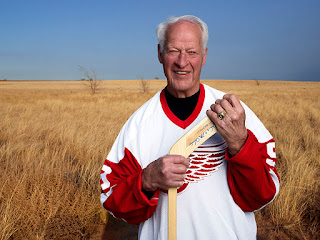 On a day when the world honored and said good-bye to Muhammad Ali, arguably the
greatest athlete of all-time, another legend, who like Ali, transcended his sport and
seemed much bigger than life, passed away.

Gordie Howe, known throughout the sport as "Mr. Hockey", died at the age of 88. Howe
played a quarter-century for the Detroit Red Wings, putting his name on four Stanley Cups,
six Hart trophies and six Art Ross trophies. He was an NHL All-Star 23 times.

Wayne Gretzky came along and broke all of his records and earned the nickname,
"The Great One," but it's Howe who is still considered by many to be the greatest hockey
player ever. 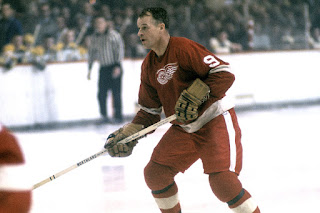 Howe was more than a scorer, netting 801 goals in his career. He was quite possibly the
toughest man in NHL history. Nobody messed with Gordie Howe. He didn't need an
enforcer like Gretzky had in Marty McSorely in Edmonton and Los Angeles.

Howe was "old-school" long before the phrase became fashionable. If you have an
old dictionary and needed to learn the definition of it, chances are Gordie Howe's
picture would be under it.

Howe took  matters into his own hands, racking up more than 1,400 penalty minutes
which weren't accumulated with the help of tripping and elbowing infractions. Howe
fought and he fought often.

Over the last decade of his life, Howe fought just as hard as he did on the ice. He overcame
two debilitating strokes, ones that would've ended the lives of a normal person. 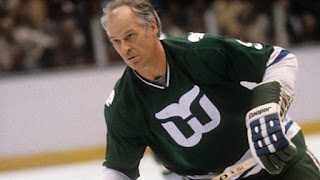 Howe wasn't normal. He was freakishly strong and had an iron will. Few were surprised
that Howe battled back from the strokes, after all, the guy played almost 30 years of
professional hockey before retiring at the age of 52.

Like Ali,, Howe touched and effected the lives of so many people. He may have been
a tough SOB on the ice, but once he took off the skates, Howe was the nicest and most
humble of human beings. He was a true gentleman. 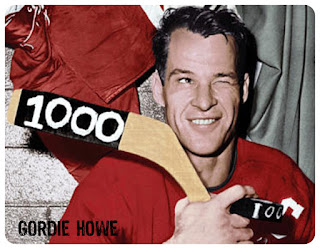 I didn't see Howe play much with the Detroit Red Wings but I had his hockey cards
and knew of his greatness. I'll never forget him playing with his sons, Mark and Marty,
for the Houston Aeroes of the WHA.

I'll never forget what a Gordie Howe hat trick is: a goal, an assist, and a fight.

I'll never forget Gordie Howie and what he meant to hockey and those around him.

Like Ali, Gordie Howe is the greatest and will never be forgotten.