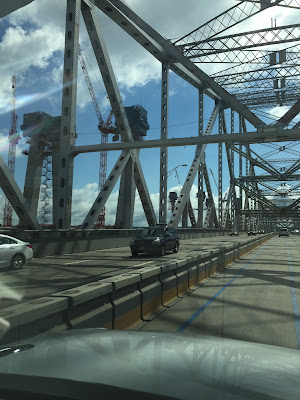 Over the last year and a half, I have been in one of the 130,000 vehicles that cross the
Tappen Zee Bridge in New York nearly every day. I was familiar with the bridge having
grown up in Rye, which is about 12 miles away. It became a small part of my life
recently as I used it to get to work in Rockland County.

But there's not just one Tappen Zee Bridge anymore. There is almost two. State officials
made the decision in 2010 to build a new one after studies showed the original one had
enough wear and tear that might lead to a major catastrophe. 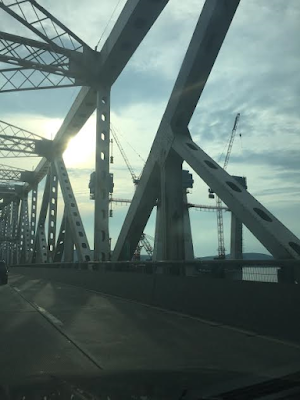 Watching the construction process over the last 16 months has been a jaw-dropping
experience. Seriously, how many times in our lifetime do we get to see a major bridge
rise up right before our very eyes.

I have been so fascinated by the process, I've documented the process nearly every time
I pass over the bridge. Yeah, I know. Taking out the cell phone on a scary ass ride over
a bridge and attempting to take pictures is pretty downright stupid, but the building of a
bridge this size is an engineering marvel that has gripped me. 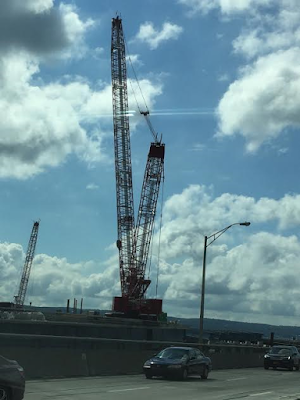 To see the size of the cranes, cement structures, and metal for the spans that will be
used is absolutely incredibly. I drive on the bridge and look at these workers
high in the sky and they appear to be as tiny as mosquitoes, seemingly tip-toeing
up and down stairs to get to their next project.

The project is both spectacular and as we found out on Tuesday, downright precarious.
A crane toppled down on the bridge, coming apart like a leggo set smashing the ground.
Amazingly, only three motorists were injured and none of the injuries were considered
life-threatening. 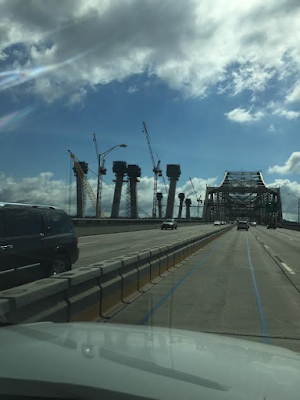 As with any project this mammoth, there are consequences. There is collateral damage.
In May, a tug boat rammed into a pillar of the bridge just before sunrise, leaving three
crewmen dead. Today, it was the crane accident. Completion of the $6 billion project
is expected to be finished sometime in 2017, but in New York, nothing is ever completed
on time.

Rest assured, there will be a few more mishaps. I know it sounds morbid, negative, and
dark, but when a three-mile bridge is being built with tons of concrete and steel. Bad
things sometime happen. They just do.

Every time I cross the old bridge which opened in 1955 and was designed to last only
50 years, I am astounded by the engineering that goes into the construction of a new one.
I am amazed at just how precise engineers have to be in planting and stabilizing structures
deep into the Hudson River.  There are no do-overs, mulligans, or room for any type
of error. The slightest misstep or miscalculation results in a near-catastrophe like Tuesday's
crane collapse. 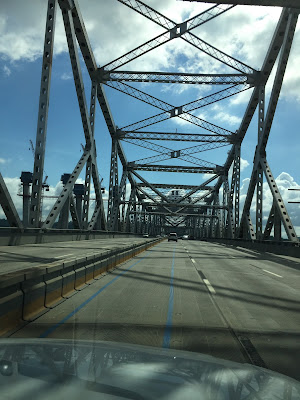 I marvel at the exact science of a project like this. Every bolt, every piece of steel, metal,
and aluminum have to be perfectly placed the first time. The precision that goes into
making eight-lanes over a three-mile span is just mind-boggling to me.

When I saw the crane go down on the Tappen Zee Bridge Tuesday afternoon. I was
stunned. Timing is everything in life. I'm just thankful I wasn't on that bridge during
that time of day.

Bridges are amazing. The construction of them are truly an engineering marvel.