TONY GWYNN, ICHIRO, AND THE LEGEND OF COLON 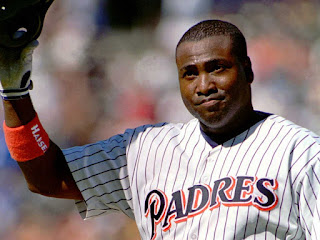 The family of Tony Gwynn filed a wrongful death lawsuit against the tobacco industry
Monday. The Hall of Famer died in 2014 at the age of 54 because of salivary gland cancer
which was most likely caused by Gwynn's 31 years of dipping smokeless tobacco.

Every day for 31 years he put poison in his mouth.

I respected Gwynn as a player and person. He was a good guy and "Mr. Padre". But I'm
not a fan of his family going for the money grab. 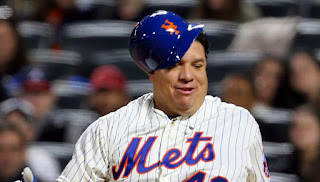 Bartolo Colon of the New York Mets turned 43 years old Tuesday, one day after shutting
down the Washington Nationals on one run over seven innings. Colon has become a cult
hero around baseball, especially after hitting his first career home run in early May against
the San Diego Padres.

Colon has 222 career wins, which is more than Hall of Famer Pedro Martinez. The big fella
was busted for PED use a few years ago when he was with the Oakland A's, but people
seem to have given him a pass because he is far more likable than say a Roger Clemens or
Barry Bonds who never failed a test but have always been under the jet black cloud of
suspicion since the Steroid Era.

I guess it all depends on who you are. 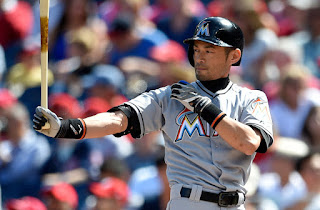 Ichiro has been seemingly lost in the large shadow cast by Colon, the oldest player in
baseball. However, the Japanese superstar who is 42-year-old and just five months younger
than Colon, is starting to make people take notice. Ichiro had four hits for the Marlins
Monday night, raising his average to .417 for the season.

Ichiro is now just 40 hits shy of reaching 3,000 in his MLB career. Ichiro, unlike Colon,
is a fitness fanatic who keeps himself in terrific shape and it's paying off.
Posted by Paul Devlin at 7:20 AM