MAT OREFICE IS A STAND-UP GUY 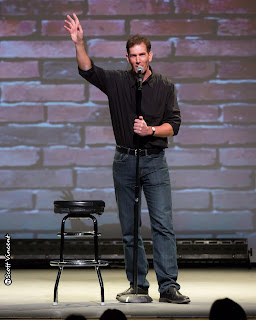 ''It's never too late to be what you might've been."
George Eliot
﻿
On March 20, Mat Orefice walked onto the stage at the Ridgefield Playhouse to make
his comedic debut. He had taken a eight-week course to prepare for this moment, but in
reality, it was more like 47 years in the making.
"I have been a stand-up comedy junkie since I was seven," said the 1979 graduate of
New Canaan High School. "I always scoured the TV Guide looking to see when Steve
Martin, George Carlin, or Flip Wilson would appear on Merv, Johnny, or the Michael
Douglas show.
The TV Guide? That went out long before the Rubik's Cube, acid-washed jeans, and the
Sony Walkman. At 54-years-old, Orefice knew he wasn't getting any younger, so in
January he decided to go after his dream.
"I just never had the guts to try it myself," said Orefice. "But I made a resolution
to toughen up and go for it. That, and I was waiting for my parents to die to avoid
disgracing their good names," he said jokingly. 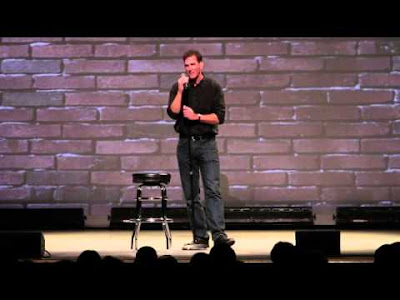 If Orefice was nervous, he certainly didn't show it. He was relaxed, confident, and
downright funny as he entertained the lively crowd. At 6'6", Orefice is an imposing figure
and with a last name like his, there is enough material to bring down the house.
"Yeah, my dad's name really is Dick," he said. "Some things just write themselves."

Everyone who saw Orefice's stand-up debut posted on Facebook wrote complimentary
things about their friend's performance. They weren't just being nice, they were being
honest because Orefice has some real talent to make his own mark in the industry even
if he is just a rookie.

"The best time to plant a tree is 20 years ago," the Fairfield resident said. "The second-best
time is today." Orefice added. "I try to put fear in the backseat so I get to drive the car.
And I'm a notorious late-bloomer, so this stuff isn't totally out of character."

No, it most definitely is not.

Orefice had another obsession growing up: punting a football. His hero was Ray Guy,
the Hall of Fame punter of the Oakland Raiders. In middle school, Orefice competed in
the annual Punt, Pass, and Kick competition and spent hour after hour booting footballs. 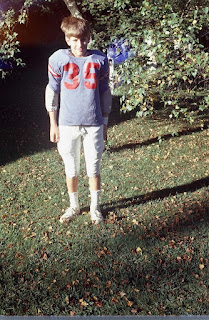 He never punted a single one for New Canaan High School because as Orefice puts it,
then-coach Harry Shay didn't want anyone on the team "who would just stand around
to kick and punt."

After graduation, Orefice headed to SMU, which was on the cusp of building a national
contender, thanks to a lot of $1,000 handshakes, flashy sports cars, and two spectacular
running backs named Eric Dickerson and Craig James. Without punting a single football
in high school, Orefice thought it was time to chase a dream.

"I tracked down the special-teams coach (Jeff Kohlberg) in the fall of ’80 to ask for
a tryout," he said. "I punted barefoot, but stopped and put on cleats soon after it got cold." 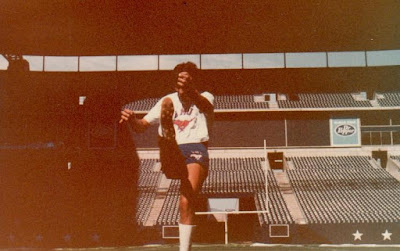 Orefice got to walk-on, but the coaches would often try to make him walk-off with
killer workouts that were not meant for the faint of heart.

"I had never lifted weights or done sprints before and I would be so sore and barely be
able to walk for two weeks, but I stuck it out," Orefice said.
Orefice ended up sticking it out for three years and there were perks that came with
his perseverance. The Mustangs won bowl games, competed for conference titles, and
while he didn't receive any $100 handshakes from boosters, because after all, he was
just a punter, Orefice got an all-access pass to one of the country's best football
venues.

"Coaches gave us the keys to Texas Stadium where the Cowboys played because they
figured if we were going to punt footballs around, we might as well do it where we played,"
he said. "We'd do pretty much whatever we wanted at Texas Stadium." 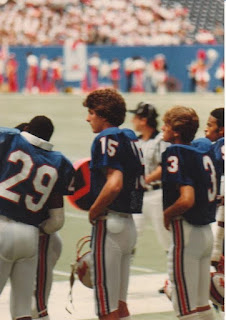 Even in today's game, kickers and punters aren't thought of as 'real' football players
who get their craniums busted up every day in nutcracker and Oklahoma drills designed
to 'toughen' players up, and back in the early 80's, the punter from New Canaan
didn't get special treatment from one the team's most special players.

"My locker was right next to Eric Dickerson's for three years and he always used to
say to me, 'Man, you are NEVER sweaty,' recalled Orefice.

The NCAA eventually caught up to the "cash-and carry" scandal and put the program
on probation during Orefice's junior year. A few years after Orefice graduated, the
NCAA gave SMU the 'death penalty', shutting down the football program. 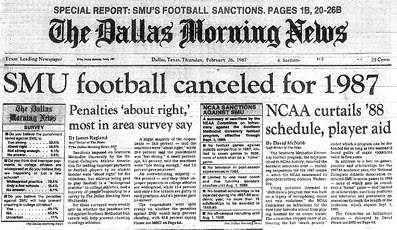 "Was it deserved? Yes. But it was devastating and the program is still feeling the effects
of it today," he said.

Today, Orefice is the founder and president of Wordplay Inc. He is married with
two children and still plays drums and writes songs for a band called, "The Zamboni's."

Orefice is also a stand-up guy, one with unlimited potential and enough time to
be who he still wants to be.
﻿
Posted by Paul Devlin at 5:45 PM