WHY WE LOVED TOM MENINO The city of Boston lost a big part of its soul on Thursday. Thomas Menino, who
stayed in the mayor's chair longer than anyone in the storied political history of the
Old Towne, passed away after a bout with cancer.

When word spread of his not-so-sudden, but still suprising death, reaction across
the region was pretty much the same: "Awe, I loved mayor Menino, he was a great
man and was one of us." Menino loved Boston as much as it loved him.

With a lisp and a man who talked as if  he had hot marbles in his mouth, Menino
was perfectly imperfect. He was like the favorite uncle who didn't have to bring
presents to put a smile on your face. He laughed at himself just as easily as others
laughed at Menino's long and comical history of malapropism's. The former mayor
once described the shortage of parking in city, "an  Alcatraz around my neck." Menino
called former mayor John Collins "a man of great statue" instead of stature. 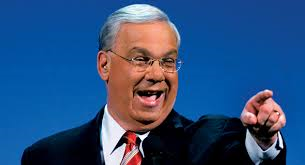 If any other politician had been the master of the malopropism's like Menino was,
Boston would've run him out of town quicker than you can say, "No-maaaaah," or
certainly never would've let him last as long as Menino did.

Boston is a tough, tough town, one  not interested in small talk or phoniness. It is
smart and sophisticated but also a shot-and-beer (or three) type of town that doesn't
take to outsiders too kindly and isn't impressed with button-upped politicians who
smile for all the cameras and say one thing, but do quite another.

Boston will see right through you and your agenda. What it saw in Menino
was a man who appeared to be a nice guy on the outside, but on the inside was tough
as nails. He fought for, and protected his city. He withstood the poisonous arrows
from his political opponents and lasted a mind-boggling five terms.. When he had
to get down and dirty, Menino did. He rolled up his sleeves and didn't always do
what was right for him, but most certainly right for the city. 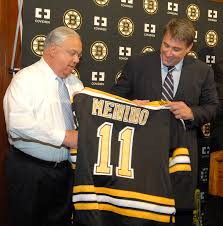 But most of all, we loved Menino because he tried so hard to be a great fan of
Boston sports. That comes natural to pretty much everybody in the region who
seems to know every stat of every player whose ever put on a uniform of the Red Sox,
Celtics, Bruins, and Patriots. Most think they can coach better than Belichick, contsruct
a team more efficiently than Ainge, and preside over a franchise more impressively than
Lucchino. 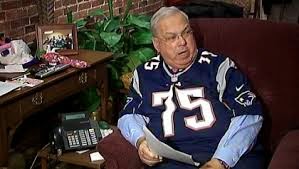 They wanted desperately for him to be this type of sports fan, the one who puts
everything on hold for its beloved teams and can't go to bed until they know
the final score and how many passes Tom Brady completed. They wanted him
to live and die with every win or every loss and Menino tried hard, oh, so very
hard to do that and they noticed.

Menino knew Boston sports, he just didn't know everything about them. But
he tried. He tried to pronounce the names of many of the stars of Boston, but
he just couldn't. He once mentioned Varitek when it should've been Vinitieri
and  blurted out Hondo when he was talking about Rondo. My gosh, he called
Wilfork, "Wilcock" and even botched the name of the Patriots tight end whom
everybody calls "Gronk". He once hoped the Red Sox would "win the World Cup." 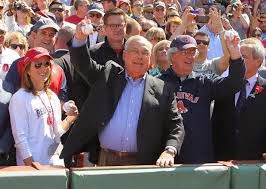 But he tried. Menino tried really, really hard and Boston loved him for it.

Rest in peace, Tom Menino. You were truly loved.
Posted by Paul Devlin at 1:49 PM